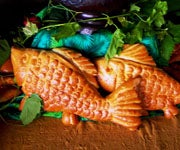 We saw an incredible poached salmon display from food artist and Wild Chef reader Charlie Krause on last week’s Friday Food Fight. While Chef Charlie’s salmon didn’t win against Field & Stream Copy Chief Donna Ng’s classic stuffed brown trout, which currently has about 75 percent of the votes, that poached salmon tray was still impressive. So I caught up with Chef Charlie to ask him a few questions about what it takes to turn food into fine art–like the bread fish sculpture shown here.

After high school I wanted to learn to do something with my hands–besides fishing, that is–so rather than go to college I went to the Culinary Institute of America. My dad and mom were artists–the whole family are all artists. I have been an artist and craftsman most of my life. That transferred to food soon after I went to school.  What was the most challenging dish you’ve ever done?

I did a party celebrating the turn of the century in Westbrook, Maine. We had an “English Room” with everything in that room cooked from 1900s English cookbooks. We made a meat pie filled with boned-out birds stuffed with a pork and brandy sausage. In the pie there were four geese, four turkeys, six hens, six ducks, and 24 quail. Each bird was boned out 100 percent. The quail was stuffed and put in the hens and ducks with sausage and stuffed into the turkeys with sausage and then stuffed into the geese. This is like a large turducken. We took apart 10 large cheesecake pans to make a three-tier form, lined it with a special crust, and packed in the birds and sausage. It weighed probably 100 pounds or more and took 13 hours to cook. Meanwhile all those bones made a great stock that was reduced down to a wonderful sauce. The pie came out of the oven looking good. We pulled away all the cheesecake pans and it was magnificent. The crust was flaky, all the meats were tender and the sauce was something special.

I have had plenty, but a disaster to a professional means something different than a disaster at home. Typical disasters are more on the level of “Oh crap, the fish is bad and we have 300 for dinner tonight,” or “I just burned the soup for the buffet in 20 minutes.” I have had countless pans forgotten and burned. It goes with the territory.  What’s your favorite fish or game animal to prepare?

Truly the poached salmon is one of my favorites. Brook trout any way, any time. Saddle of venison is probably my favorite game dish.

How did you prepare that amazing salmon display?

After cleaning the cavity of a whole fish I fill it with cheesecloth, then wrap it in white cotton cloth. Place sliced onions and celery in to the bottom of a large stainless fish poacher. Add several peeled lemons cut in pieces, some white pepper, salt, and bay leaves. Then cover the fish with white wine. A fish this size takes a gallon or more but it must be covered. You can substitute one-third water if needed. Cover the whole thing with foil and on the stove it goes on low. Bring the liquid up to 180 degrees but never go over 185. A 5- to 8-pound fish will take a couple of hours. After an hour or so, check the temp of the fish in the thickest part. When it reads 145 degrees internal at the bone, turn off the burner and let cool for an hour. Then set the whole thing in the fridge overnight. The next day carefully remove the fish and cut away the wrapping to expose the fish. The fish should look fresh. The liquid should be clear. Carefully cut a widow in the skin of the fish by cutting with the tip of a paring knife and then carefully lift and remove the skin from the front to the back. There will be some dark meat and that can stay or be carefully scraped off with a small knife. Now it is ready to serve or it can be decorated.