I know this goes against the horn-happy hogwash shown on what passes for outdoor television, but when I’m after an... 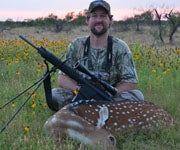 I know this goes against the horn-happy hogwash shown on what passes for outdoor television, but when I’m after an animal, especially when it’s a species I haven’t hunted before, I’m not counting antler inches before I pull the trigger. Instead, I’m thinking about how that animal is going to taste. So when I got a chance to hunt axis deer in south Texas last week, I was excited to finally get the chance to bite into an animal that’s widely praised as the best game meat on the planet.

I was down near Sonora, doing some testing for Winchester’s new Razorback XT line of monolithic bullets with SOE Hunts and a few industry friends. I’m happy to report both the Razorbacks and the company’s Powermax Bonded bullets performed admirably on the free-range axis deer and hogs we targeted that weekend. I’ll also tell you the axis meat was good enough that I brought 60 pounds of it home in my luggage, and left another set of hindquarters with the butcher in Uvalde, who’s going to turn it into sausage and ship it to me.

So, is axis deer the best game meat there is, like so many claim? That’s hard for me to say. It is damn good. For my first taste, I cut some ½-inch steaks from the backstrap, added a pinch of salt and pan-fried them in butter to just medium-rare. The meat was, not unlike the holy infant, so tender and mild. I’ve since had a chunk of that backstrap cooked whole on the grill, sliced and served in some lettuce-wrap tacos and will be putting another in the smoker later today. But, being the best is a pretty bold claim, and I’m going to have to say that crown still goes to my personal favorite: the pronghorn.

What about you? Have you tried axis deer? What do you think is the world’s best game meat?