A few weeks back, Wild Chef reader KoldKut threw down the gauntlet when he called out a couple of other... 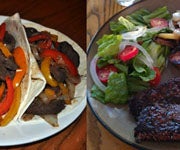 A few weeks back, Wild Chef reader KoldKut threw down the gauntlet when he called out a couple of other readers who disparaged the looks of his pronghorn curry. Well, it took some time for one of the readers to muster up the courage (or get down to cooking), but MaxPower responded. As he says: “Bruised egos can be big motivation.” So here is this week’s grudge match, featuring MaxPower’s elk fajitas against KoldKut’s antelope steaks.

I lust after the food showcased every Friday in your Food Fight contest (and throughout the week) and have always wanted to enter. But, until I got called out by another regular to your blog, I didn’t have the stones to submit anything. Here’s my humble and first entry. My Elk Steak Fajitas are nothing fancy, but they are amazingly tasty and satisfying when done right. I try to use good cuts of elk. I know this isn’t the norm when it comes to fajitas, but I have enough elk to spare and this is one of my favorite dishes so why not use good cuts? I started the meat over medium heat, and when they’re close to brown, I cover them in my own Tex-Mex mix and toss in sliced red, orange, and yellow peppers as well as an onion and turn the heat to medium-low. I let simmer until the veggies are softened but not mushy, wrap in a tortilla and inhale. If I’m feeling a bit underweight, I slather some sour cream on the tortilla before filling it, or add some Tabasco as well.

In light of my curry taking a beating, here is pronghorn–un-smothered. I got the taters and onions going in the pan and had the steaks sitting aside with some steak seasoning on them waiting for the grill to heat up. Once it hit 450 degrees, I went out there and laid them on the grates and went back inside to tend the salad and taters. I looked out moments later to see the thermometer sitting at 300 degrees. No biggie, I thought. It must just have to catch back up after I opened the grill. And a few moments after that, it was around 250 degrees and my fears were confirmed by a quick check. I’M OUT OF PROPANE! So I rushed a pan on the stove, cranked her up to high and rescued the barely marked steaks to the stove. The taters are simple, but cooked slow to let the onions do their thing with simple salt and pepper, and the salad is a not much more than lettuce, tomatoes and some thinly shaved onion slices. The drink was Sierra Mist and Bulleit bourbon. Dig in!

Think you can do better? Prove it by submitting your best food photo to fswildchef@gmail.com.