Foraging Chokecherries: What Fruit is Ripe Where You Live?

I snuck out at sunrise this morning to do a little foraging. A neighbor has a couple miles of windbreak... 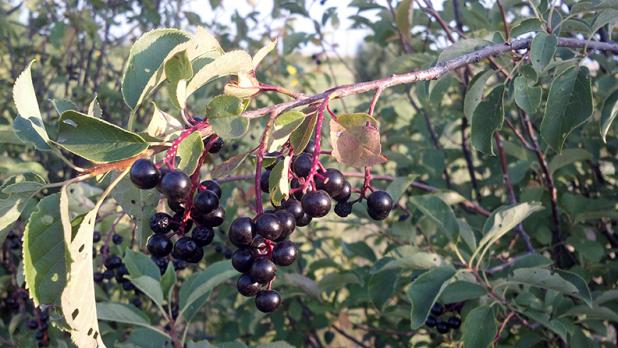 I snuck out at sunrise this morning to do a little foraging. A neighbor has a couple miles of windbreak planted with chokecherries and wild plums and he gave me free reign to pick as much as I wanted. I’ve been meaning to get over there for a few weeks and finally found a free minute today. From the looks of it, I was a little late. There were lots of dried chokecherries hanging, but with that many bushes, I did find plenty of ripe ones as well. Interestingly, the cherries on one bush would be completely dried while the next bush would be loaded with full berries. I also found the east side of the bushes tended to have the better berries, thanks to what little shade they could find on the hot prairie.

I don’t think I made it 50 yards from my truck and picked about two and a half gallons of chokecherries. I would have kept picking but deadlines, including this blog, were looming. I did end up with enough for a batch of chokecherry wine and, who knows, I might sneak out again tomorrow for more. I do love chokecherry jelly.

From the looks of it, the wild plums won’t come ripe until about the time I’m in elk camp and since crabapples were a bust this year, that leaves raspberries for the last of fruit season around here. What’s going where you live?