It’s hard to say which I like better: a big meal of corned beef, potatoes and cabbage on St. Patrick’s... 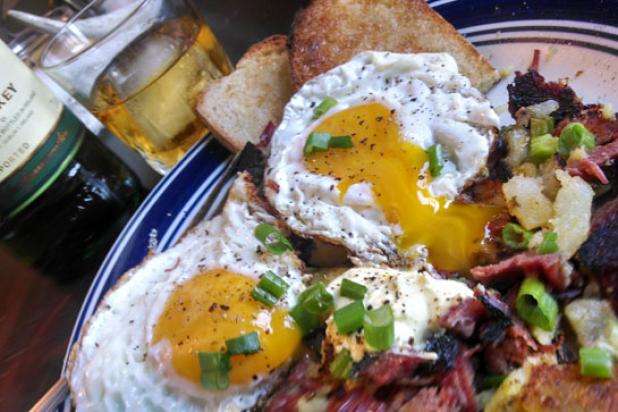 It’s hard to say which I like better: a big meal of corned beef, potatoes and cabbage on St. Patrick’s Day, or that day-after cure of corned beef hash and eggs. Both are among my favorite meals of the year, but only the latter has the ability to put a high point on what is normally a rough morning. But there’s more to corned beef hash than mixing together meat and potatoes and frying it in a hot skillet. Here are seven of my hard-won secrets to creating the best corned beef hash you’ve ever tasted.

You can also make a great St. Patrick’s Day (or anytime of year) meal by substituting venison roast or even goose breasts for beef brisket when making corned beef. You can find my recipe for corned goose here.

1. Shred, Don’t Cut
The best corned beef hash is about texture nearly as much as flavor. Use two forks to shred the corned beef instead of dicing it. This creates lots of differing shapes and edges to get crispy and capture flavors.

2. Add a Drop of Worcestershire
When mixing the corned beef, potatoes and onion, a little moisture is necessary to hold everything together. For every two cups of meat mixture, add two to three shakes of Worcestershire sauce or a tablespoon of beef stock. Any more and you’ll get steamed meat mush instead of crispy corned beef hash.

3. Use a Cast-Iron Skillet
A lot of recipes recommend a non-stick pan, but cast iron works even better. It holds the heat evenly, creates a crisper crust, and still releases the hash from the pan once it’s browned.

4. Don’t Crowd the Pan
If you pack too much hash into the pan it will steam instead of fry. If you’re using a 10-inch skillet, don’t fry more than a cup or two of meat and vegetables at a time and fry the corned beef hash in batches when cooking for a group.

5. Let It Sit
Once you’ve added the hash to a hot pan and pressed it down firmly into a patty, resist the urge to stir it. Instead, let the corned beef mixture cook undisturbed so the bottom gets nice and crispy. After 5 to 7 minutes, you can carefully lift up the edges to check for browning on the bottom.

6. Forget the Flip
Once the corned beef hash is browned on the bottom, experts suggest flipping the hot pan onto a plate before sliding the hash back into the pan top down. This is easier said than done. Instead, once the bottom is just about where you want it, slide the whole pan under a hot broiler for a minute or two to brown the top without the messy and dangerous juggling act.

7. A Dab of Secret Sauce
The right garnish takes so-so hash to a whole new level. That means saving the ketchup for kid’s hot dogs and adding a bit of homemade horseradish sauce instead. Whip together 8 ounces of sour cream with two tablespoons each of horseradish and yellow mustard. Chill for a couple hours before adding just a dollop to your best corned beef hash ever.