A hat tip to Wild Chef reader Koldkut for cluing me in on this cool story. Hunters already support wildlife... 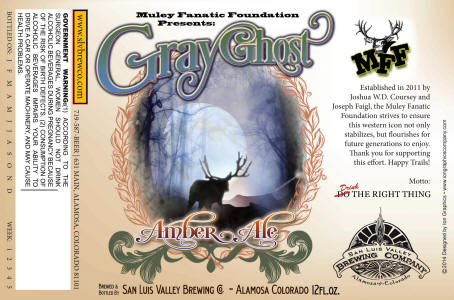 A hat tip to Wild Chef reader Koldkut for cluing me in on this cool story.

Hunters already support wildlife and habitat conservation through Pittman-Robertson excise tax dollars on guns, ammo, and gear. Now they can do the same whenever they enjoy a cold beer.

The San Luis Valley Brewing Company in Alamosa, Colo., recently announced the release of Gray Ghost, a beer for deer — or for deer conservation, anyway. Proceeds from the sale of the brewery’s newest amber ale will go directly to the mule deer habitat and conservation efforts in Colorado and Wyoming.

Gray Ghost Amber Ale was developed in partnership with the Muley Fanatic Foundation, a relatively young conservation organization focused on exclusively on mule deer recovery. Their motto: “To ensure the conservation of mule deer and their habitat and to provide such supporting services to further the sport of hunting and sound wildlife management.”

“Hunters have a unique character, creativity, and independence to their lives. Dark crimson and full of flavor, Gray Ghost exhibits those qualities in liquid form,” Scott Graber, owner of the San Luis Valley Brewing Company, wrote.

Gray Ghost is currently only available on tap, though the brewery has plans to release the hoppy ale in 22-ounce bottles in the near future.