CC image from Flickr Urban deer are a growing problem in many U.S. cities, and officials have struggled with how... 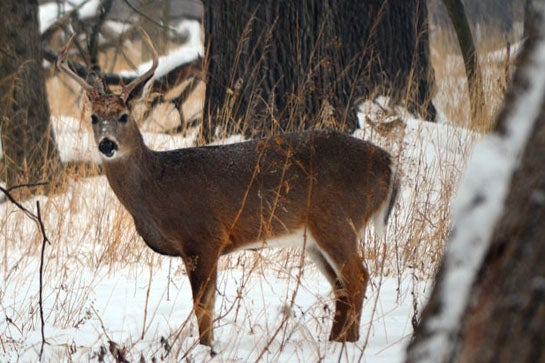 Urban deer are a growing problem in many U.S. cities, and officials have struggled with how to deal with them. Somewhat surprisingly, considering it’s a government agency, the National Park Service has come up with a plan that not only manages an extreme over-population of deer, but also helps feed the less fortunate in Washington, D.C. According to this New York Times article, sharpshooters in the city’s Rock Creek Park removed nearly 200 deer in the last two years and donated all of that prime venison to D.C. Central Kitchen, which provides meals for area shelters.

“_The government sharpshooters worked so efficiently in the dead of the night in Rock Creek Park that by the end of this year’s short killing season, they had shot 106 white-tailed deer.

Make that 3,300 pounds of local venison turned into meatloaf, burgers and more for the surprised directors of homeless shelters and other charities across the capital.

Despite local protesters who say the killings are cruel, the goal remains culling the deer population down to no more than 20 deer per square mile, from 77 per square mile counted last fall. Armed with small-caliber rifles, professional sharpshooters from the Department of Agriculture started killing deer in a one-night operation in March last year. The herd thinning quietly picked up again over five nights from January to March this year.

Now, to help the homeless and to make sure that the dead deer are not simply discarded — an action that would further outrage local residents — the National Park Service has the meat inspected and processed and then gives it to D.C. Central Kitchen. Using donated ingredients, the kitchen cooks and distributes 5,000 meals a day to community centers and shelters._”

It’s worth noting that D.C. Central Kitchen is no stranger to using donated deer, as Farmers and Hunters Feeding the Hungry gives them up to 5,000 pounds of processed venison each year. Kudos to both the National Park Service for educating people about the importance of venison as a healthy source of protein, and to FHFH for exemplifying how hunters are stewards not only of the land, but also of their community.