It’s not easy getting a tiny chironomid midge in the face of a giant still-water trout, but if you master the technique, that trout will chew every time 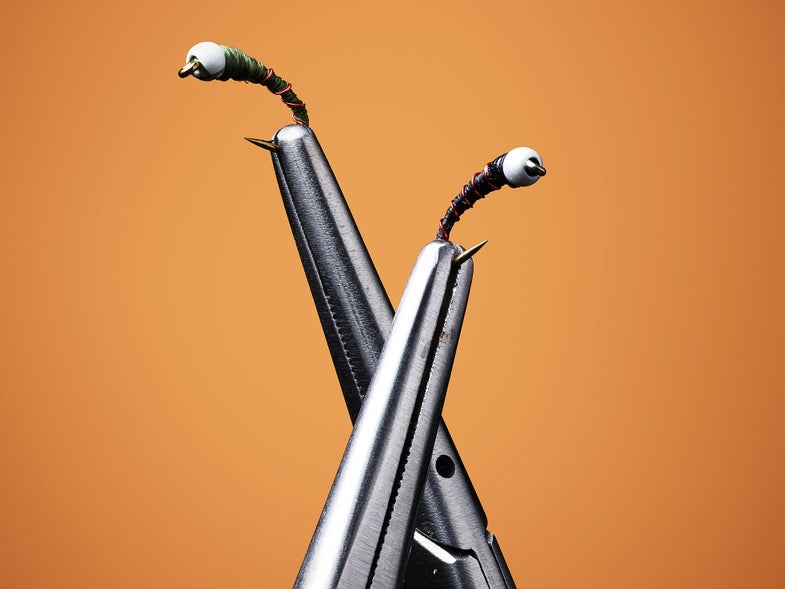 The first time I witnessed the power of chironomids was back in the 1990s on Lenice Lake in Washington state. I had been stripping a leech fly for hours without a touch. Twenty yards away, a buddy of mine was crawling a strike indicator across the surface at a snail’s pace. Below it hung a tiny, thin, wormlike chironomid fly—often just called a midge. Every few minutes, that indicator suddenly jerked under, a deep bend formed in his rod, and he’d slide another big rainbow into the net. After the seventh strike I couldn’t take it anymore. Making fun of him earlier for fishing these micro bugs in such big water was a mistake, I realized, and clearly he knew something I didn’t. I made the switch and within three casts was tied into a 5-pound rainbow. It was an eye-opening fish that changed my whole perception of how big trout feed in still water.

On western lakes and reservoirs, chironomids are one of the most abundant food sources in early spring, hatching as soon as the ice melts. At this time of year, after surviving the lean winter season, trout are on a serious mission to regain their energy stores, which means they may eat chironomids by the hundreds daily. Though I’ve been fishing these flies for years with some success, it wasn’t until last May that I got the ultimate chironomid education while fishing with Brian Chan, the angling advisor for British Columbia’s Freshwater Fisheries Society and renowned still-water trout expert. This crash course happened during a single day on Chan’s johnboat at an unnamed lake an hour outside Kamloops, B.C. What I learned will make you believe in the potency of these tiny flies for huge trout, and help you sink the net around more spring still-water trophies than ever before.

Chironomids begin their lives as eggs on the bottom. Next, as larvae, they eat decaying plant matter and build tube-shaped cases around themselves. When the pupae mature within these cases, they break out and ascend to the surface. If they reach it before a trout finds them, they struggle free of the pupal shuck and fly to nearby vegetation to mate. Females return to the water within 24 hours and drop eggs, which sink to the bottom, completing the cycle.

In spring, the pupal stage is key because pupae often suspend within a few feet of the bottom, wiggling as they finalize their transformation before rising to the surface. Large concentrations of chironomid pupae are available in small areas, and the trout casually swim through them, chowing down. According to Chan, determining whether the feed is on starts by eye.

“When I’m cruising around in the boat, I’m always looking for chironomid shucks on the water’s surface,” Chan explained as we idled out. “If I see them, I know a hatch is coming off. I also look for birds working over the water because they feed on these bugs, too.”

As Chan motored us along in 20 feet of water, he kept a sharp eye on his sounder. As soon as he marked four fish in a row, we dropped anchors off the bow and stern to keep the boat as still as possible.

“In water 20 feet or deeper, the ­sounder’s cone is wide enough to mark fish directly below the boat,” Chan said. “If you’re in 15 feet or less, then side-scanning sonar works best.”

What I couldn’t figure out was how we were going to suspend these tiny flies in the strike zone with fly rods in such deep water. The answer was some specialized rigging.

Chan’s chironomid rig starts with a 7½-foot leader that tapers down to an 8-pound tip. Once it’s connected to the fly line, he threads on a quick-release strike indicator, and then splices 10½ feet of 6-pound tippet to the end of the leader with a Blood knot. He ties a small barrel swivel to the end of the tippet, adds another 2 feet of tippet to the other end of the swivel, and uses a nonslip mono loop to tie on the fly. The swivel adds a bit of weight to the bottom of the 20-foot leader, helping keep the fly suspending just off the bottom. Next comes a ½-ounce lead weight with viselike jaws that Chan clips directly to the hook shank (see “Load the Clip” on p. 56 for more on clip weights). He lowers the lead over the side of the boat until it hits bottom. Then, based on the sounder reading, he’ll reel up until the fly is directly in the mix of hovering chironomid pupae and feeding trout. In our case, we needed our flies 2 feet off the bottom. Once the depth was set, we pegged our indicators in place and hand-lined our rigs back up to remove the clip weights. The quick-release indicators we were using trip when a fish strikes, allowing them to slide down the leader during the fight. If you were to use a fixed indicator in more than 10 feet of water, you’d never be able to get a trout close to the net.

Chan likes to make a long cast directly upwind, which allows the line, indicator, and fly to drift back to him naturally. He slowly strips in line, keeping slack out so he can detect strikes quickly. As the indicator bobs in the chop, the chironomid below gently gyrates like a natural pupa. Chan makes the presentation look simple. I found out in a hurry that it’s not.

“A 10-foot rod with moderate action makes casting easier, but the most important aspect is to make three or four roll casts until the swivel and the fly come back up to the surface,” Chan told me. “Then you can make an overhead cast.”

In the beginning, I couldn’t get my fly farther than 5 feet away from the boat, but when I eventually got the hang of it and managed some distance, the bites came fast. For the next few hours, Chan and I hooked rainbows to 6 pounds, one after another.

Chironomid pupae range widely in color from red to chrome, and the trout have a habit of keying in on one particular hue. That’s why it helps to carry a lot of patterns in a variety of colors and sizes. Most chironomids are tied on scud hooks and are available in sizes 8 to 18. The most common coloration of pupae is black; however, dedicated still-water anglers like Chan always carry a small seine to sample pupae, and a pump to extract them from trout throats. His go-to pattern is a white beadhead and black body wrapped with red copper wire, but if it doesn’t get eaten in a hurry, off it comes.

“If I see the bugs on the water and have fish under the boat and I don’t get something after three casts, I’m changing,” Chan said. “If I don’t get a bite in 20 minutes, I’m gone. You’ve got a limited window. They’re usually on the bite for three to six hours a day, and then it’s over.”

Fishing chironomids in deep water with long leaders is certainly easier from a boat, but you can cash in with the method from shore via some tactical tweaks and strategic placement. Deep water isn’t always a requirement for success.

In any given lake or reservoir, some trout cruise the shallows looking for chironomids. In the ideal situation, they’ll push onto shallow shoals where you can sight-cast to them, dropping a chironomid below an indicator right in front of their noses. If skinny water isn’t producing, use contour maps to locate areas of the lake where deeper edges cut close enough to shore that you can reach them with a ­moderate-​length cast from the bank or by wading. Chan says the trick is to avoid sinking lines, which will cause your fly to spend more time stuck on the bottom than hanging in the strike zone. He fishes the same rig he uses on the boat to suspend a fly near the bottom over the edge of a dropoff.

Since fishing with Chan, I’ve had many productive spring days using his rig along the banks of several lakes in my home state of Montana. Unlike boat fishing, where you simply let the indicator drift freely, I’ve found that covering water is critical from shore. After my fly settles, I’ll slowly take in line, just barely moving the fly, which mimics a chironomid’s struggle to change from a larva into a pupa. While the process may be slow compared with stripping a streamer or casting to rising trout, I promise the takes are just as jarring.