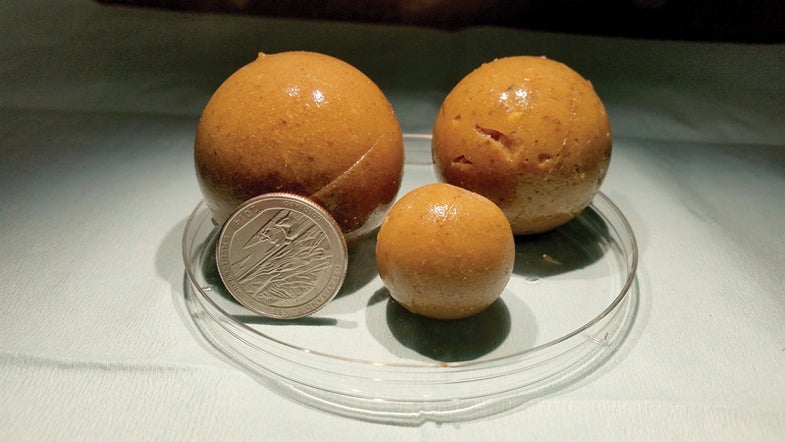 The poison baits are about the size of a golf ball and contain about 8 grams of sodium nitrite, enough to kill about a 98-pound pig within a couple hours, according to researchers. Louisiana Forestry Association
SHARE

A meat-curing compound commonly found in bacon may be the ticket in helping wildlife managers, landowners, and farmers tackle the increasing problems caused by burgeoning populations of feral hogs. For nearly 10 years, researchers at Louisiana State University have been exploring how to use sodium nitrite as a humane and effective method to kill crop-rampaging, habitat-destroying hogs. Marauding hogs are attributed with roughly $50 million in agricultural damage there.

An article in Forests and People magazine, posted on the Louisiana Forestry Association website, updates research and testing by Dr. Glen T. Gentry, aided by LSU’s Chemistry Department, to create a bait that wild pigs will readily eat. The bait delivers a lethal dose of sodium nitrite to wild hogs that breaks down fast enough so as to not negatively affect the environment or scavengers that might feed on feral hog carcasses. This is in contrast to traditional poisons that might accumulate in the environment or harm other animals.

Sodium nitrate and nitrite are common preservatives, used in curing meat products like bacon, deli meats, and jerky. The compounds are the reason why cured meat is pink or red. In meat, nitrites turn into nitric oxide, reacting with proteins and helping preserve it, along with changing its color. The compounds are also linked to heart disease and diabetes. Some food processors are cutting out their use and producing, for example, “uncured” bacon.

According to Louisiana’s Department of Wildlife and Fisheries, the state’s feral hog population is estimated at 700,000. Due to feral hogs’ high reproductive rates, 70 to 75 percent of the population must be killed to control the population. Louisiana reports that the hunter harvest is less than half of that objective, meaning populations are growing. Feral hogs are found in all 64 Louisiana parishes. Trapping and hunting, including day and night shooting by private landowners, plus aerial gunning by nuisance wildlife-control specialists, are used.

According to Gentry, the sodium nitrite approach came at the request of the U.S. Department of Agriculture and Environmental Protection Agency. He told Forests and People, “Sodium nitrite is relatively safe for humans. When a mammal consumes sodium nitrite, it induces methemoglobinemia. So, your hemoglobin changes form and it cannot carry oxygen.”

Gentry first shared this then-new wild hog research at an August 2014 natural resource symposium in Baton Rouge. He outlined challenges related to figuring out what flavors pigs preferred, learning strawberry and dehydrated fish (bass and porgy), among others, appeared tasty. The key was finding a bait that tasted better than corn, one of a hog’s favorite foods. How to get the sodium nitrite into a bait that would largely stay intact until the hog ate the whole dose was another challenge. They eventually begin taking a serious look at semi-solid bait forms, something similar to gummy bears, developed by LSU AgCenter researcher Zhijun Liu in the School of Renewable Resources.

Another challenge, beyond getting the right taste, is keeping the sodium nitrite dose intact in the bait—that is, not letting it break down in the environment or crumble when the hog eats it. Otherwise, a lethal dose might not be delivered. That’s where the gummy bear consistency comes in, offering a texture that makes it easy for the animal to eat smaller pieces that might break off, Gentry said.

Gentry also worked with the chemistry department on preserving the sodium nitrite’s potency. Sodium nitrite exposed to air breaks down into sodium nitrate, which is less toxic to animals.

“[Gentry] had already made a bait the hogs would eat,” said Dr. John Pojman, professor and chair LSU’s Department of Chemistry. “We just had to find a way to keep the nitrite in it stable so it wouldn’t break down until the hogs ate it.” To keep the sodium nitrite from becoming acidic and breaking down, then giving off an odor similar to chlorine, Pojman and his graduate students used an antacid to stabilize the compound.

The baits they seem to have settled on are about the size of a golf ball and includes about 8 grams of sodium nitrite, enough to kill about a 98-pound pig within a couple hours, Gentry said.

“It’s not cruel,” Pojman told Forests and People. “It’s a very humane way to kill a hog. They just fall asleep and it kills them. And if they don’t eat enough, they wake up and are fine. It really is amazingly humane.”

Answering a question that might be on the mind of hunters who kill a pig that ingested a less-than-lethal dose and want to have some feral pork on the dinner table, Gentry said, “Unless he eats the stomach contents themselves, there’s some work coming out of Texas that says it’s safe.”

Moving forward, the researchers are looking at how the toxic baits might be used with wildlife feeders equipped with cameras that can instantly transmit images. Based on the number of feral pigs feeding, the user can send a message to the feeder to selectively release a set number of the baits. Final bait formulas are still being refined.