The Fine Art of Shotgun Engraving 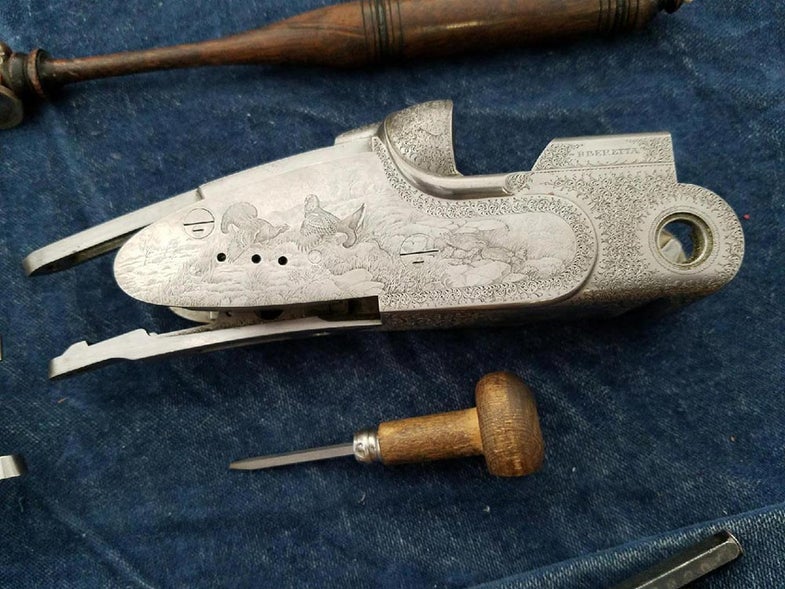 A bird-hunting scene is engraved on this Beretta receiver. Phil Bourjaily
SHARE

Two weeks ago, on a visit to the Beretta factory in Gardone, Italy, I was lucky enough to see the engravers at their benches in a quiet studio filled with natural light. Master engraver Luca Casari even showed me how to handle a hammer and chisel. On a block of steel, I made a gouge, another gouge, then a short, straight line. When you do get the angle right, the tools cut through steel easily, but still, it’s incredible to me that people can actually draw ducks or tiny rose scrollwork on metal. Based on my gouge-gouge-line I might be able to do Morse code messages on a gun, but that would be about it.

Firearms engraving originally served utilitarian purposes: it covered up flaws and, according to Terry Wieland’s excellent book Vintage British Shotguns, cut glare and provided a textured surface to hold oil on the receiver. From simple beginnings, firearms engraving has evolved into an art form of its own. Collecting guns engraved by various well-known engravers isn’t quite as popular as it used to be, but it’s still a thing. If you have enough money, you can have anything engraved on a gun, from the usual scroll or game scenes to the incongruous (I’ve seen Picasso’s “Guernica” on a gun) to the completely inappropriate (explicit sex, which I cannot now unsee).

Good engraving definitely enhances a gun, while bad or very faint engraving is worse than none at all. The current trend to shallowly-cut laser engraving on production guns is unfortunate, although you find it on some $4,000 and $5,000 guns that would look much better, in my view, without it. It’s also possible to do laser engraving so well it’s difficult to tell whether it was done by hand or by a machine. The gun I was invited to Italy to see, Beretta’s new SL3, is completely engraved by a five-axis laser which can follow any metal contour and create beautiful designs without the aid of human hands.

In between hand and laser engraving, there is roll engraving, which I have seen done in the Miroku factory in Japan. The design is engraved in reverse on a curved plate, then rolled onto the gun in a press so it cuts into the metal. Roll engraving can be left as-is, but the better grades are then hand-chased with chisels to deepen it. Other makers use a combination of lasers, EDM and hand-chasing to good effect.

At Beretta, the highest grade guns are still engraved the old-fashioned way. The process begins with a smear of grease, then powder on the metal surface. The engraver scribes the design into the powder before going to work with the hammer and chisel, then switching to a burin (hand chisel) for the fine details. They use a tiny loupe magnifier to see details as they work, and the end result is beautiful. They showed us how they cut a sort of angled dovetail into steel that will securely hold gold inlays that are then hammered in, and they had some examples of baked enamel decoration as well in the shop.

Engravers tend to be younger than you would expect, and engraving is one of the few jobs in fine gun making (checkering is the other) where you see women working alongside men. Beretta runs an apprentice program where young people study for five years before going to work for Beretta or another maker in Italy’s gun valley. They would seem to have a steady supply of talented artists, and we can only hope lasers don’t someday take all of their jobs.