Tackling the Asian Carp Invasion with a First-Time Bowfisherman 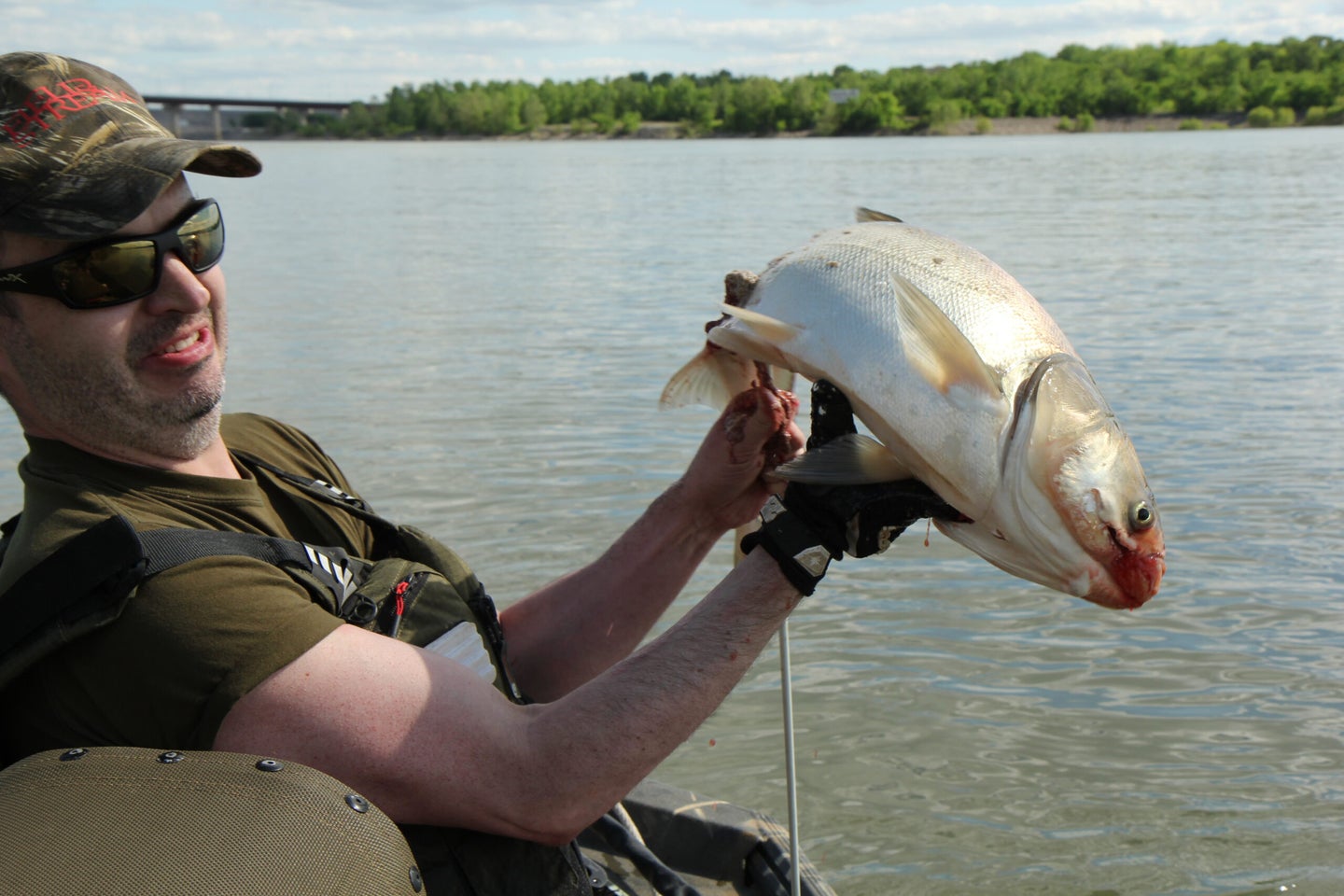 Russ Smith is standing below Barkley Dam wearing black skinny jeans with the cuffs rolled up above a pair of cowboy boots. But he’s wearing a camo cap, too, and holding a bowfishing rig while watching for carp. And really, the skinny jeans aren’t what makes him stand out among the dozen other bowfishermen lined along the same shoreline. It’s his perfect shooting form. There are a lot of arrows being flung here, most of them missing, but none of the others miss with more class than Russ. He carefully anchors every shot, positioning his bow arm and elbow perfectly and bending slightly at the waist. It’s deliberate—artful, even.

I could compare the performance to a fly angler, false-casting his way to the perfect drift. The backdrops are different, of course. In lieu of a bubbling stream, there are thousands of dead and festering carp washed up on the banks below the hydroelectric dam, with sirens blaring and parking lot waste baskets overstuffed with Mountain Dew cans, fishing line, and dirty diapers. And though Russ’s missing is making him just as ineffective as the average fly angler, it’s only temporary. He’s shooting a bit over every carp—as everyone does that at first. Once he figures out to compensate for the light refraction and aim low, he’ll be lethal: The graphic designer from Brooklyn, come to exact hell on the invasive carp problem.

Russ has flown from New York to Nashville, where he rented a car and drove a couple hours north to meet me in Kentucky. It’s the first time in four years, he says, that he’s driven a car, and the first time in a year that he’s traveled out of the city because of Covid-19. And he did all of that for a chance to go bowfishing, something he’s always wanted to try. Years ago, Russ designed the magazine layout for a bowfishing story I wrote in Field & Stream, and he asked me if it was as much fun as it looked.

“Damn right it is,” I told him, and invited him to come to Kentucky. As many such casual invites go, I never really expected him to make the trip. But we finally put it on the calendar for early May of 2021, and Russ booked his ticket. In the city, he says, he goes to an indoor range, where he’s taken archery lessons. And it’s clear he’s paid attention. He tells me that he’s interested in bowhunting but the hurdles required to kill a deer are steep. He doesn’t have an easy place to hunt, and even if he did, he doesn’t own a car. Bowfishing, on the other hand, looks accessible—plus action-packed and low-key. And so, here we are.

From Carp to Cats

We have just three hours of daylight left on our final afternoon of bowfishing and so far, our luck couldn’t have been much worse. It was sunny and hot the day before Russ arrived—perfect conditions—but a vicious storm passed through that night. Tornadoes were confirmed just down the road, and we woke up the first morning as one of the 14,000 area households without power.

But that wasn’t the worst of it: Showers and clouds hung on most of the first day, taking away the critical bright sunlight we needed to spot fish with polarized sunglasses. Besides that, the air temperature had plummeted 20 degrees. The flooded willows in the shallows of the lake, which had been full of common carp and gar a day ago, were now cold and the color of creamed coffee. We tried anyway, and we did get a few shots. Russ arrowed his first fish—a spotted gar—but it wasn’t the carp-a-minute action he’d come here to experience.

We took the gar back to camp, where I split down its back scales with a heavy knife and filleted away the tiny-but-prized backstraps underneath. We rolled them in flour, fried them, and declared that gar ‘po boys could be a good thing.

We still didn’t have power the second morning, and it was still cold—but we did get some sunshine. I asked Russ if he’d ever caught a catfish, and he couldn’t remember having ever caught a fish on a rod and reel, save for a sunfish or two when he was young. We decided to let the water warm up a bit before trying the bowfishing again, and instead ran out to the edge of the river channel on Kentucky Lake, to a submerged rock pile where I’d caught a bunch of catfish a few days earlier.

A hard north wind was blowing, and I anchored the boat into it. I baited four spinning rods with night crawlers, cast them out the stern, and put them into rod holders. The boat bounced, up and down 2 feet at a time with each wave, and Russ and I found ourselves grasping at the gunnels to keep steady.

The fishing was slow. But after an hour a spinning rod finally doubled over, and Russ pulled a three-pound flathead catfish to the side of the boat. He followed that up within minutes with another of about the same size, plus a pair of channel cats. With enough fish in the basket for supper, at least, we decided to make the hour’s run to the dams, for one last try at the bowfishing.

After shooting from the bank for awhile, we leave Barkley Dam and drive a few minutes to the Kentucky Dam tailwaters, where we’re able to launch a half-mile downstream into the Tennessee River. The odds don’t look good. The current is stiff, and the sun’s beginning to sink in the west. I’ve almost accepted that Russ has traveled a long way to catch a few catfish and shoot a tiny gar; post cold front fun at its finest. Still, we aren’t quitting yet.

The current pushes us downstream at a good clip, and I use the trolling motor to keep course along a mud bank. We drift past a treetop and strike gold: a school of bighead carp is finning on the surface in the eddy below the tree, and we launch a pair of arrows simultaneously. Russ just misses high, but I hit a 40-pounder that flops loose from the arrow at the boatside. It’s more action than we’ve had yet—but still, we don’t have a fish to show for it.

We reel in and reset, and continue our drift. And through polarized sunglasses, we see them—silver carp cruising the shallow bank, not by the hundreds…by the thousands. “Russ, pick a fish and start shooting!”

He draws and anchors with his perfect form and lets fly. And by damn, he aims low enough. I see the flash of a fish, hit squarely in the flanks with a boil of blood, and Russ’s line stretches taught under the boat. As he’s pulling the fish in, a silver carp cruises past me, and I hit it, too.

For 30 minutes, we’re shooting carp fast as we can reload our arrows and draw our bows. Blood and slime and scales and carp eggs splatter across the boat and us, too—like they’ll do in a good day of bowfishing. At one point, I look at Russ, who’s holding at full draw, laughing and frantically pointing his arrow from one fish to the next as they lazily cruise past us on the surface, just feet away. “I can’t decide which one to shoot!” he says.

It is a good feeling. We kill carp like professionals, hands raw and blistered from bow strings and braided line. I don’t know how many silvers are skewered in the flurry of action, but it’s as fine a frenzy of invasive carp shooting as I’ve seen in a while. And then, after two drifts, the school vanishes from the shoreline and melts into the river.

Sitting in my truck, Russ’s pants are caked with crisped-over slime, and he has carp guts stuck to his arms and his shirt, and some to his face. “Are you sore?” I ask him. “Because I am.”

He’s suspending his arms over his lap, as if he’s holding an invisible infant child. I realize, through all the shooting and gore, Russ hasn’t said much, and I wonder to myself if perhaps the mess is more than he bargained for.

“My neck is sunburned,” he says. And then he belly-laughs, deep and genuine. “That was awesome!”

Russ did his shooting with a Muzzy Vice Bowfishing Kit, courtesy of FeraDyne Outdoors. The bow itself was perfect for high-volume bowfishing—built tough and with just the right amount of let-off (75 percent). Though the spincast XD Pro reel worked fine, we did have a problem keeping the mount tight, and so we swapped it out mid-trip with a retriever-style reel mounted to the riser. The kit comes with a bowfishing arrow tipped with a Muzzy Gar Point (my favorite bowfishing point, for whatever swims), to which I added a safety slide and stop to prevent snap-backs. It’s a 30-second fix that costs a few pennies, and I won’t shoot a bowfishing arrow without it. —W.B.