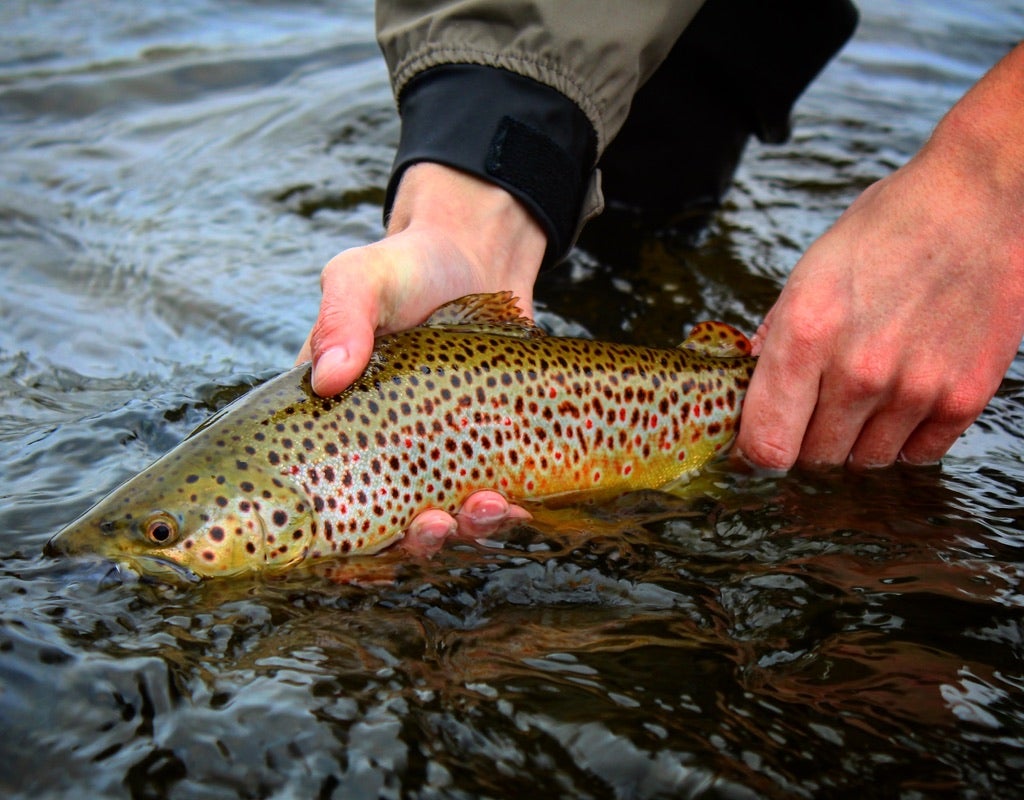 Add an assortment of non-traditional patterns to your fly box to catch more trout this spring. Ryan Chelius
SHARE

Staring at a dry fly or indicator drift after drift without a single take is aggravating. Maybe it’s a new fancy pattern you just learned to tie or a way-too-expensive fly the kid at the shop promised would catch a big fish. Either way, you are now hours into fishing, wading in the river wondering if you can return the six-dollar hopper you just bought. We’ve all been there.

Opening up your box to find an old reliable can save the day. They are the “flies” that always seem to get the job done. I say “flies” because many of these patterns don’t imitate one particular insect, bug, or baitfish. Consider them the misfit toys of the fly fishing world. Some purists may snub their noses at these patterns because they look goofy and don’t fall under the category of a traditional fly pattern. But for those who simply like catching trout and don’t mind doing things a little differently, these seven cheat flies are for you.

There is no better fly to kick off the cheat list than the famous Woolly Bugger—one of the most recognizable and common flies out there. Its versatility is what makes this streamer so deadly. I’ve caught everything on Woolly Buggers, from brown and rainbow trout to steelhead and bass. You can dead drift it, strip it, or swing it through a run. The Woolly Bugger thrives in lakes, ponds, streams, and rivers. If there’s water with fish in it—then the Woolly Bugger will work.

The beauty of the Woolly Bugger is it can imitate several kinds of prey. It resembles leeches, crayfish, minnows, and small baitfish. It comes in various colors, sizes, and styles. I like to tie weighted Woolly Buggers with either a bead head or wire tied around the hook shank. The weight allows me to get the fly down in the water column when fish are holding deep.

The San Juan Worm is another outcast among classic trout flies and a springtime favorite. It is a simple yet extremely effective pattern that even novice fly tiers can produce. All you need is some chenille and thread to create this fly. The San Juan imitates exactly what you think it does—worms. One of the most productive times to fish this pattern is after a rain when worms rise to the surface and are flushed into streams.

I like to use bead heads and fish the fly below an indicator. Once you dial in the correct depth, you can adjust your indicator, so the fly suspends precisely where you want it to in the water column. I make sure my box is holding a few every time I hit the water. The next time it rains, head down to the river and tie on a San Juan Worm. You won’t be disappointed.

Here is a fly you love to hate. The Mop Fly is debated in fly fishing circles and a pattern that almost every fly angler has an opinion on. I’m not sure there’s a pattern more tailored for the term “cheat fly.” Its name and appearance alone separate it from all other patterns out there. But I wouldn’t include it if trout didn’t love it. The fly gets its name from looking like scraps of old mops and rugs. As flashy and ridiculous the Mop Fly may look, trout seem to think differently. It resembles fly larvae and grubs—both of which trout love to feed on.

Like any fly, there are all kinds of variations and patterns. But the consistent theme is that, well, it looks like part of a mop. From my experience, the more flash and ridiculousness added to the pattern, the better it works. You can fish it all in different ways, but I like drifting it under an indicator through seams and riffles.

I was fishing a spring-fed stream in late spring when I started noticing caterpillars all over my jacket and waders. At first, I didn’t think much of it as I struggled to dial in on what the trout were rising to. I tried every dry fly in my box with no luck and sat on the bank defeated. While sitting down, disappointed in my angling abilities, another caterpillar plopped right onto my lap. Out of frustration, I took the caterpillar and tossed it into the stream. As soon as it hit the water, a trout came up and smashed it. A light bulb went off in my head. I finally noticed that the entire bank, trees, and over-hanging brush were covered in caterpillars, so I took a few more off the leaves and tossed them in the stream only to watch trout instantly demolish the bug as it hit the surface.

I had no luck finding any fly shop or website that sold caterpillar flies—so I made my own. At Michaels arts and crafts store, I bought a piece of one-dollar green foam. Next, I used some leftover green chenille, hackle, and thread to complete my first and only original fly pattern, the Plopper Stopper. Here’s how you tie one:

First, make sure you have dry fly hooks. Next, lay down a base layer of thread before tying on a piece of chenille the length of the hook shank. Finally, tie your foam to the hook shank, leaving sections of the foam raised to resemble a caterpillar’s body. Color in some dots with a sharpie for the finishing touch. I’ve found this pattern to work well as a terrestrial fly on most streams and produce bites along the bank and under overhanging brush.

There is no other way to describe egg patterns than deadly. They are trout slayers and produce bites no matter where you go. They can often be overlooked on the stream and thought of only as a steelhead pattern. But eggs work exceptionally well on smaller trout streams by using the same fishing techniques as steelheaders.

You can fish with egg patterns by tight lining or underneath an indicator. Both are effective, but I personally like to use an indicator. It helps give me a better visual of my drift and understand where my fly is in the water column. Look for the usual fishy areas, which means targeting riffles, seams, and runs. I often do very well with eggs in deep pools where trout hold in colder water at the bottom. Egg color is like any other fly pattern, and you have to try different styles until you find what works. Some days it’s bright and flashy, while others, it’s natural and dull. I tend to lean toward natural colors with a couple of small split shot to make sure I’m getting down.

Depending on how you define “cheat flies,” this one may be up for debate. I’m including it on the list because of its consistent productivity on the river. Pat’s Rubber Legs is a typical stonefly nymph pattern found in fly boxes all across the country, and rightfully so. It is a versatile fly that will catch trout, steelhead, and smallies. Pat’s Rubber Legs will work on any stream or river where stoneflies are present.

These flies do well right off the bottom of the stream bed. You can dead-drift or swing the fly to produce strikes. The legs create motion in the water and serve as an attractor. Stoneflies make for high-protein meals for trout and can be lights out when the bite is on. They come in all different colors and sizes, and you should tailor your fly selection toward your stream and style of fishing.

A more modern take on the classic San Juan is the Squirmy Worm, which is just as lethal. What’s the difference between the two? The only fundamental differences are the material and action of the fly. The Squirmy Worm is tied with a thin silicone material that gives off a wiggly motion in the water. Like the San Juan Worm, they are easy to tie and great for beginners at the vice and on the river.

This pattern also imitates worms and can be fished in a similar way to the San Juan Worm. I like to suspend the worm under an indicator and add weight if necessary. I often find myself breaking out of a Squirmy Worm when the fishing gets tough, and I need a fly that I have confidence in to produce a bite. As with many cheat flies, some anglers look down on the Squirmy Worm. If it’s not your thing, it’s just not your thing. But if you ask me, there’s no reason to be embarrassed when fishing a Squirmy Worm. You are fly fishing to catch fish—and have fun. A Squirmy Worm will most definitely help you accomplish both.