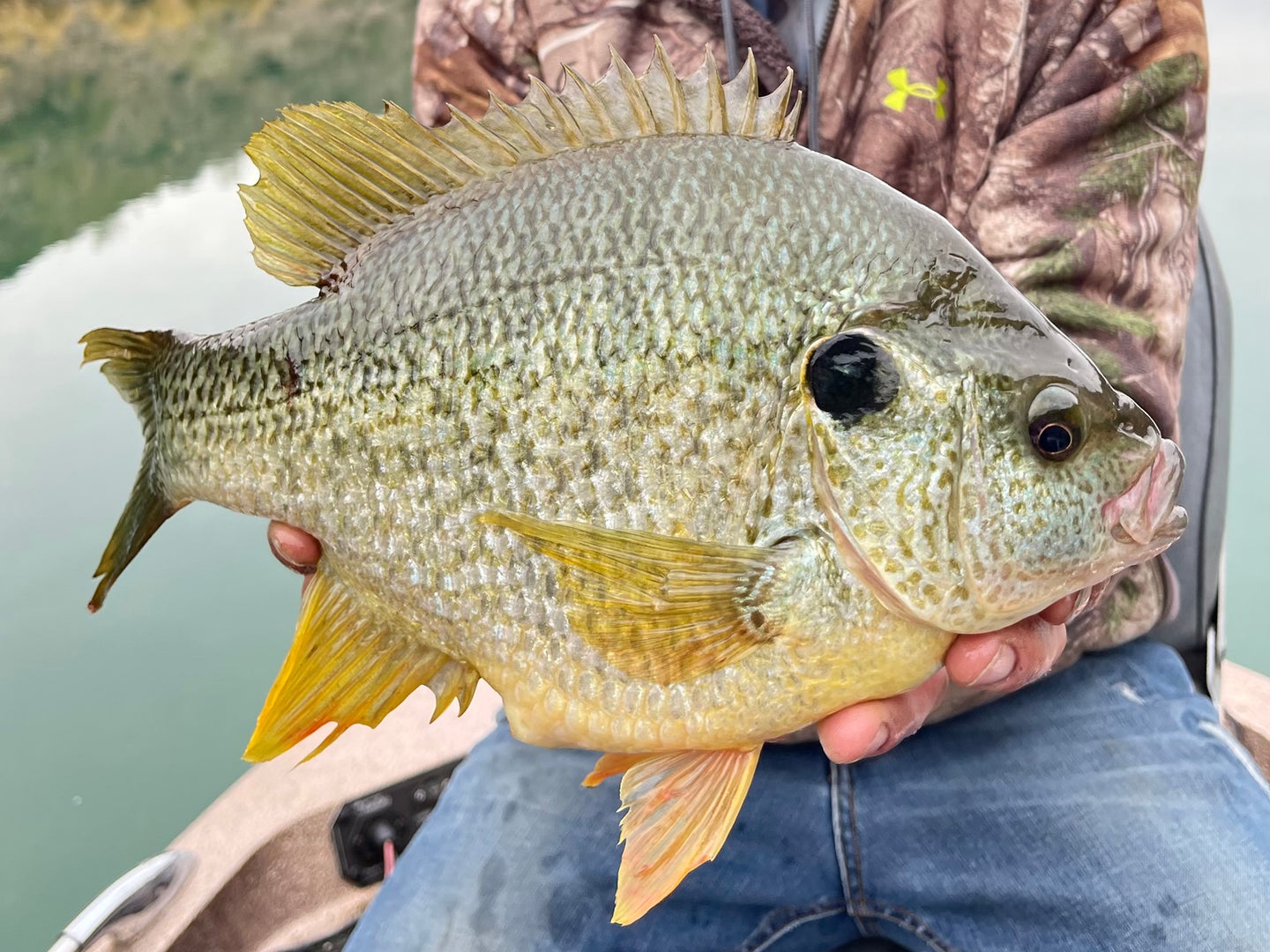 It takes two hands to show off a good shellcracker, which can grow much larger than other sunnies. Zac Mickle

A Limit with Wade: Catching Shellcrackers With My Hero

The author remembers his mentor, Wade Bourne, and the rare spring morning when they caught one elusive shellcracker after another

SOME SAY a big shellcracker is the most mysterious fish in freshwater. Properly called a redear sunfish, it’s three times the size of a keeper bluegill, on average, and just as delicious. But it’s notoriously finicky, apt to ignore a nightcrawler threaded onto an Aberdeen hook but then inhale a redworm thrown to the same spot on the same rig the very next cast. Most of the time they hug the bottom, where they probe gravel bars for snails. When you haven’t caught one in a year, their power against light spinning tackle is startling. For a few short days late in the spring, when the weather is warm and the moon is just so, and if you’ve been a good person most of the year and hold your mouth just right, you might find shellcrackers on a bed and catch a mess of them.

One time, and only one time, I caught my daily limit of 20 shellcrackers from a single bed at a local lake. Wade Bourne caught his limit too. He was standing at the stern of my 16-foot johnboat, threading redworms onto his hook and laughing with surprise at each hookup, as if he hadn’t spent an entire storied career doing things just like this.

I don’t think Wade ever knew what a mentor and a hero he was to me. I’d wanted to be an outdoor writer from about the age of 12. But I never cared about going to Africa to hunt dangerous game, and I didn’t read Capstick or Ruark or even O’Connor. Instead I devoured the hunting and fishing magazine articles of the ’90s. My bedroom was cluttered with stacks of Game & Fish, Bassmaster, Southern Outdoors, Buckmasters, Fur-Fish-Game, Outdoor Life, and Field & Stream. I’d look for names like Zumbo, Hanback, and Winke, but Wade Bourne was my favorite. You could find his stories in most of those magazines, but he was also a television and radio host with a kind, clear Southern voice that was instantly recognizable.

Wade hunted and fished the same places I did, and for the same critters. On television, he shot gadwalls and squirrels and rabbits and whitetails. I remember one show when he hunted hogs with a Smith & Wesson revolver. As a teenager, I’d never seen anyone hunt with a handgun before that show, and after it, I was obsessed with the idea. Thirty years before #GetBit was a thing on Instagram, Wade was filming catfish noodling in Mississippi. Long before I met him in person, I had a copy of Southern Outdoors with Wade on the cover, standing knee-deep in a Tennessee creek with a spinning rod in one hand and a nice smallmouth in the other.

That guy has it figured out, I thought.

Wade had lived less than two hours from me in rural Kentucky my entire life, but I never knew it. Nor did I realize he was a graduate of Murray State University, where I went to school. It took living in New York City for a summer for me to finally meet him in person. I was 19 years old and an intern at Outdoor Life. I worked in a cubicle next to the editor-in-chief’s office, where I spent my days checking the accuracy of URLs and phone numbers that were about to be printed. (One of the editors had told me the horror story of the intern who didn’t verify a phone number, resulting in an adult-talk hotline making it into print.) I lived in Greenwich Village and walked 30 blocks to work on Park Avenue each day, wearing khakis and a button-up shirt my mom had bought me especially for that summer. I’d come from a tiny town in the Mid-South, and every day I wondered how living in that loud and bustling concrete hell would lead to a job where I got to fish creeks for smallmouths and shoot pigs with .44-magnum revolvers.

Then one day, Wade Bourne walked in and stood next to my cubicle to talk to the editor-in-chief. He was dressed in nice clothes, and the editor introduced me as the summer intern. When Wade heard me talk, he smiled and gave me his undivided attention. “You sound like you’re from closer to where I live than up here,” he said. “You’re learning to get into this business?”

I wanted to gush, to tell him that I’d seen him on TV when I was 10 years old, wrestling catfish in the Yazoo River. To tell him that I’d read that story he’d written about calling up a gobbler for his young son, Hampton, who missed him with a little double-barreled 20-gauge, and that the story had made me feel better because, like Hampton, I’d missed the first turkey I ever shot at when I was little and hunting with my dad. I wanted to talk about squirrel hunting and bream fishing and all the things that Wade seemed to enjoy just as much as I did. I wanted to say that my life’s ambition was to be just like him.

But mercifully I didn’t say much more than, “Yes, sir, I love to hunt, fish, and tell stories.”

But Wade must’ve heard something extra. My dad owned a one-man-show law office in Dawson Springs, Kentucky, and the next week, he called me in New York. “You’re not going to believe this!” he said. “Wade Bourne, the guy on TV, called my office to tell me that he’d met you and that he just wanted to say he was impressed.”

Two years later, I was 21 and standing neck-deep in the muddy water of the Yazoo River. A hard-boiled Mississippian named Bob stood next to me, glaring. “Get your ass in there and get him, Wade Jr.,” he told me. “He’s a yella cat about 25 pounds, and I ain’t holding him down for you.” I remember being worried about losing my wedding band, since I’d been married only three weeks and it still felt out of place on my hand.

Wade had shared the contact information for his Mississippi catfish noodlers, with the warning that they were rough around the edges, and they were. But I ran my bare hand into a cypress box the size of a coffin and grabbed the flathead waiting inside by the lower jaw. He rolled and thrashed, peeling enough skin from my knuckles to leave scars I wear to this day, but I slung him over the gunwale of the nearest johnboat. I came home, wrote a story about it, and sold it to Field & Stream—my first.

Wade was the voice and face of Ducks Unlimited then, and when I left the associate editor job at DU that he’d put my name in for, I was worried he’d be upset. But he simply wished me luck and asked that I call him if the shellcracker bite got good. One day in late May, just after a full moon, when the weather seemed right, I called Wade and invited him to come fishing with me. He met me at the lake the next morning at daybreak.

We caught a few bluegills right off the bat, but the shellcrackers were being themselves. I had a milk run of spots I liked to check, but they were mostly empty. Late in the morning, with only a few stops left on the list, I was afraid we might end the day skunked. But then I stopped my boat 20 yards off a rocky point, where I’d caught a redear or two in the past, and fired a long cast with a redworm on a drop-shot rig. When I took up the slack, my line was already swinging toward deep water. When it came tight, my ultralight rod bent into a neat bow, and the reel’s drag buzzed.

The shellcracker that finally rolled alongside the boat was so big that for a second I worried about the strength of my 4-pound-test line. But Wade scooped it up with my net—a quivering bream so thick that it was more practical to lip than grasp in the middle. “What a beautiful fish!” Wade said. It was a line that could’ve been scripted for TV or a radio show but was shared only with me, and out of genuine appreciation for being there.

“We better drop the anchor here for a minute,” I said. The spot was easy to see, as the shellcrackers had worked up a cloud of silt next to the shoreline, just at the end of a long cast. We didn’t dare get any closer. I stuck with a drop-shot, but Wade rigged his redworms under a tiny split-shot sinker and a pencil float, just because, he said, he loved to watch a cork disappear. We caught shellcrackers on almost every cast, and in little more than an hour, we’d limited out.

Wade and I stayed in regular touch, and we often talked about those shellcrackers. In the summer of 2016, the same year he received the Homer Circle Fishing Communicator Award, he called me for advice on booking an elk hunt. Since I was the hunting editor of Field & Stream and traveling the world to hunt big game by that time, he thought I might know of a place to go. We talked for a while before bad reception dropped the call. I texted him and told him we’d follow up on that elk hunt later, and he texted back, saying that it had been nice to catch up. He died of a heart attack that December, at age 69, after cutting down a Christmas tree.

I still fish that rocky point, and though no shellcracker spot is a guarantee, it’s as reliable as any I know, if you catch it on just the right late-spring day. Sometimes, when I do catch one, I’ll say out loud, to no one in particular, “What a beautiful fish.”