The Ultimate Guide to Digging for Clams

With a few basic tools and some know-how, you can collect a pile of seafood in no time 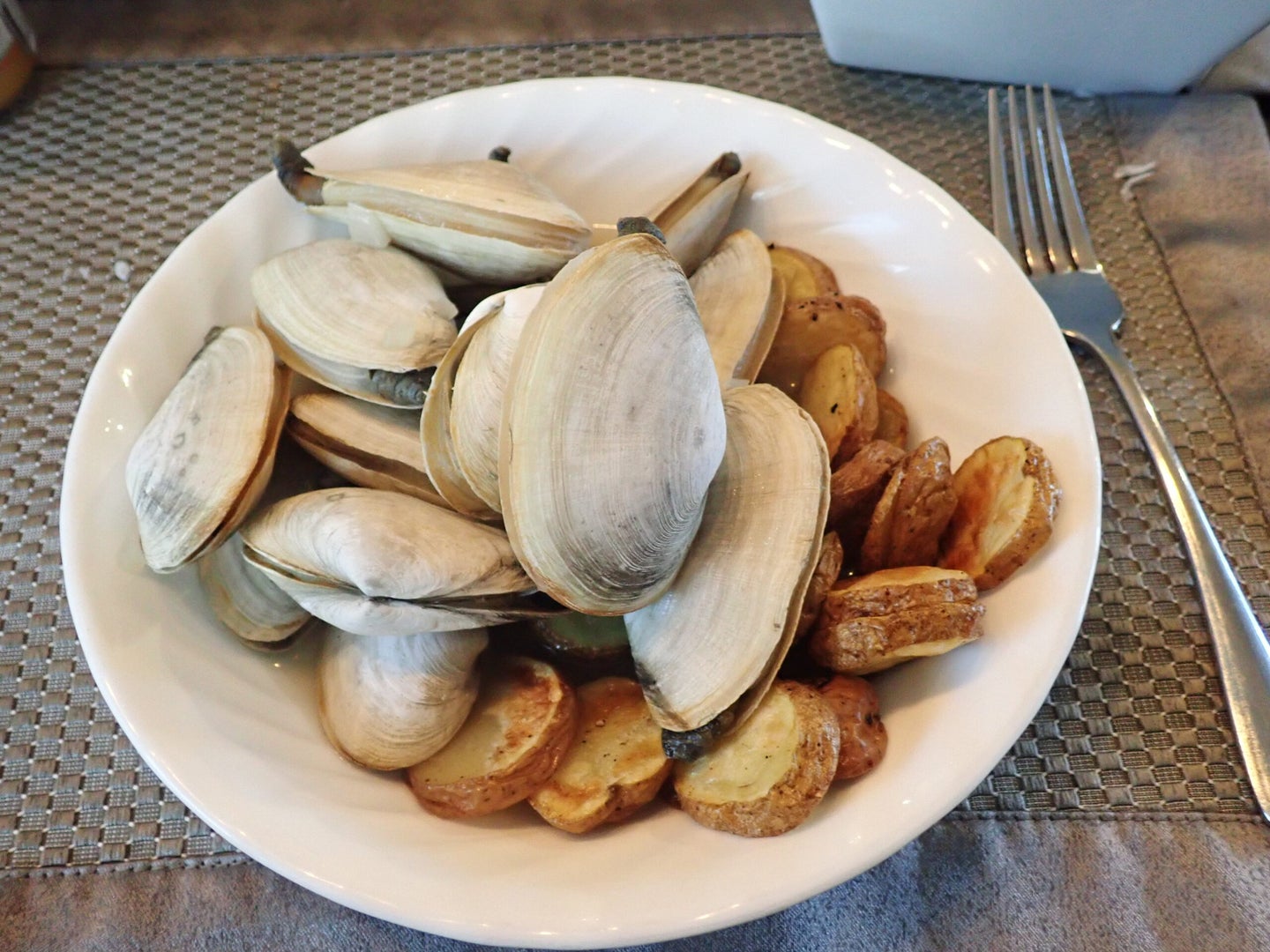 Clamming is easy and the results are delicious. Joseph Albanese
SHARE

Digging for clams was so important to indigenous people’s survival that archeologists use the mounds of shells left behind, known as middens, to identify settlements. Though we aren’t as reliant on shellfish as we once were, clams remain a delicious treat. Here’s everything you need to know to about harvesting your own clams.

Mollusks exist along every coast, and in many fresh waters. The most important for foragers and lovers of seafood on the East Coast are hard and soft-shell clams. These are found in the intertidal zone, the area where the ocean meets land between high and low tides, and the subtidal zones, which are always covered by water.

Sometimes referred to as quahogs, Mercenaria mercenaria are the clams that can be found at raw bars and in chowders. In the past, quahog shells were used by indigenous people to create wampum, a traditional shell bead used for ceremonial purposes and currency.  Quahogs are graded by size, starting with the smallest legally harvestable specimens, countnecks, followed by littlenecks, then topnecks, then cherrystones. The largest are called chowder clams because they are generally considered a little too tough to be consumed raw, and are used in cooked dishes. You can find quahogs from Prince Edward Island all the way down to the Yucatan Peninsula in Mexico.

Soft shell clams, Mya arenaria, are referred to as steamers, Ipswich clams, and perhaps most notably, piss clams because of their propensity to squirt water when you wander too close to their holes. Soft shells are often steamed, as their name suggests, or breaded and fried in sandwiches and served with French fries. Steamers can be found in both mud and sand flats, but the “arenaria” in their name means sandy, and they seem to show a preference for that substrate. Look for them anywhere from Canada to the southern states, but keep in mind that warm water temperatures limit their range.

Where to Find Clams in the Wild

Before you start digging, you need to make sure the area you plan on going to is open to shellfishing. There are many reasons why harvesting clams would be prohibited, but the most common involves water quality. You’ve undoubtedly heard the phrase “you are what you eat,” and this is most applicable to filter feeders such as clams. Because they obtain nutrients directly from the water, clams can harbor marine toxins and affect anyone that eats them. Poor water quality caused by runoff or industrial pollution will cause closures to shellfishing areas, as will harmful algal blooms and red tides.

Other reasons that an area would be off-limits include previous over harvesting or low clam populations. Some beaches are seeded with small clams from another area to repopulate the region and provide clammers with a bounty in the future. Other times, clams are transplanted from an area with poor water quality to a more favorable area, allowing the harvest of healthy clams at a later date.

How to Legally Harvest Clams

Shellfish regulations can be confusing even for folks well versed in the subject. Just who owns the clams varies greatly by locality. In most areas, shellfish belong to the people of the state in the same manner that wildlife does. But some townships own the bottom of the bay, and regulate access only to residents of that community. For example: Despite defeating the British in 1783, New York’s Town of Southampton still uses a decree from King James the Second issued in 1686 to control who may harvest shellfish in the hamlet. This is the exception and not the rule, but many areas require some form of license to harvest shellfish.

Most marine jurisdictions have a bay constable charged with enforcing fish and game laws, and you should contact their office to ensure you are compliant with local regulations. These offices can also provide you with maps of the areas that are open for clam harvesting, and they often maintain a hotline and website to give up to date information on closures due to water quality issues.

Just like the minimum size and harvest limits placed on fish, there are regulations on shellfish. Hard clams are usually measured across the hinge, with an inch minimum thickness being the required size in most areas. Soft clams are typically measured across the shell, with most jurisdictions requiring at least an inch and a half to be taken. Limits vary from region to region, but most permit taking a bushel or so a day.  Be sure to check with local authorities before you start digging.

How to Dig for Clams

Though they are buried under the surface, soft shell clams usually offer some hints as to where they lie. Walking across a sand or mud flat at low tide reveals a series of holes they create by burrowing into the substrate, and many of these will squirt water as you approach. After you spot some dimples, you can use a small trowel to remove some earth, but you’ll need to be careful to not crack the delicate shells. Once you get down a bit, use your hands to dig, feeling as you go. When you touch something hard, trace around it with your fingers. This will allow you to unearth the clam without damaging the shell.

Hard clams are usually better camouflaged, and are most efficiently harvested using a purpose-built fork  or rake. These devices feature long tines spaced about an inch apart, and penetrate the surface to bring clams upward. Unlike steamers, hard clams are usually within a few inches of the surface. To find them, drag the rake across the surface, driving the tines downward as you go—you’ll feel the resistance of the clams on the tines. If the substrate is tough, it can pay to dig a large hole in a likely area using a spade and deposit the spoils in a pile to go through with the rake. Just be sure to fill all holes back in when you leave.

How to Use a Clam Gun

Clam guns are a recent invention, originally developed to remove razor clams from West Coast beaches. Though simple, the device is nothing short of ingenious, allowing clammers to easily pull up what looks like a core sample of the beach. There is a tube section with a vent on top that gets plunged into the ground in a likely location. Then the vent hole is plugged with a finger, allowing a column of sand to be removed within the tube. Taking your finger off the vent breaks the vacuum, and the column falls out. Then you rummage through the sand and find the clams contained in it. It’s an effective tool and technique for both steamers and hard clams.

How to Purge Clams Before Eating Them

Clams pull in water to obtain nutrients and, in the process, ingest some sand and dirt. While you can open a clam right out on the flat and suck it out of the shell (and I suggest you do so at least once in your lifetime), allowing them to purge some of the sand ensures they will be less gritty when you eat them. There are a few ways to do this, but the easiest involves placing them in clean salt water for a while. You can purchase purpose-made wire baskets for this task, or simply drill a bunch of holes in bucket to let clean water flow through.

Just be sure to discard any clams that are dead or damaged, even ones you accidently broke when pulling them up. Dead clams begin decomposing immediately, and eating them can cause stomach troubles and possibly food poisoning. Tap the shell or poke the siphon and see if the clam reacts; if there’s any doubt, toss it.

How to  Shuck Raw Clams

Bivalves have two strong abductor muscles that hold the two halves of their shells shut, which makes getting to the delicious meal inside difficult. The best way to open them involves a so-called clam knife, a specialized blade with a rounded tip designed to slip into the narrow gap between shells. A pairing knife will do in a pinch, but if the blade misses its mark, your fingers will suffer much worse consequences than they would with a clam knife.

To make clams easier to open, place them on a bed of ice. Make sure they stay on top, as lowering them into fresh water can kill them. Letting them sit on the ice for around an hour will open the shell up just enough to easily side the blade in, but if it doesn’t you can cut across the hinge in the back. This will give you enough wiggle room to slide the blade in the front.

Once you have enough space to get the the knife in, insert the tip on one side and rotate the clam, pushing the blade in and along the top shell with the hand holding the clam. Rotate the clam in your hand, drawing the knife across to cut the other muscle. Once the top shell is removed, you can use the knife to free the meat from the bottom half. Then eat it raw, or use it in your favorite clam recipe.