Just about any hatch on a trout stream is worth fishing, but some are nothing short of incredible 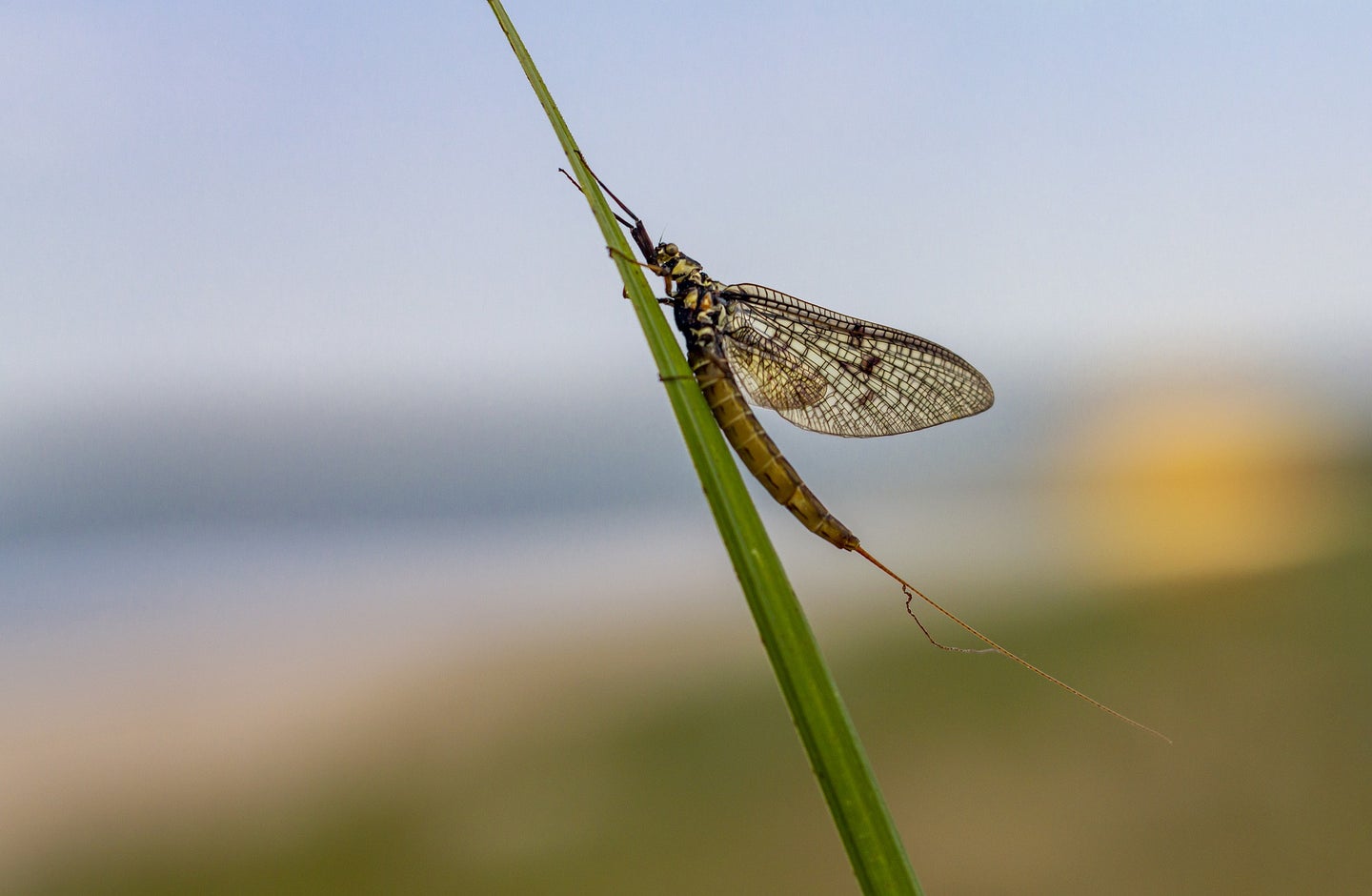 A mayfly on a blade of grass. Erik Karits from Pixabay
SHARE

Every hatch is a gift from nature, a cool phenomenon to be anticipated and enjoyed. You can almost always go find a trout holding lazily in a deep pool, but when hundreds of aquatic insects decide to leave their homes among the rocks and ascend to the surface, and the trout suddenly become visible and enthusiastic, well, that’s an exciting experience. It’s the difference between going fishing because you can, and going fishing because something is going to happen that you don’t want to miss.

We’re all grateful for our local emergences, but there are some that have regional or even national significance. Here’s a look at some of America’s beloved hatches, and the flies designed for them.

Many anglers in the East and Midwest enjoy the Hendrickson hatch more than any other. It was named a century ago when Catskills fly guru Roy Steenrod, having solved the hatch with a great pattern, declared “The fly is the Hendrickson,” after trucking magnate and avid angler A.E. Hendrickson. It’s the season’s first prolific hatch of good-sized mayflies on most trout rivers. Females of Ephemerella subvaria are a pale pinkish-tan, and can sometimes be seen flying hunched over, hauling yellow egg sacs. The males are darker. The hatch is an April event at the southern end of its range, May in the northern states, and offers the prospect of rising trout for three weeks or so, usually in the afternoon but later in the day as the hatch wears on.

Did I say the locals enjoy this hatch? Worship might be the better word. “The Hendrickson is truly the exalted king of the early season,” wrote Al Caucci and Bob Nastasi in their essential mayfly guide, Hatches II. “It is our sincere hope that every fly-fishing enthusiast have at least one good fling with the subvaria (Hendrickson) hatch.” And why not? The fish have been waiting all winter for this hatch, and so have the fly-fishers.

Popular dry fly patterns include the Compara-dun in tan or light gray, Catskill-style Hendrickson, Red Quill, and Rusty Spinner. Hatch-specific nymphs exist, but all-purpose nymphs such as the Gold-Ribbed Hare’s Ear also work; fish them before the rising starts.

Out west, the first big hatch of spring isn’t a mayfly, it’s a caddis: Brachycentrus occidentalis, often called the Mother’s Day caddis or the American grannom. As with the Hendrickson mayflies back east, this emergence is an eagerly awaited event for winter-weary fly anglers, who hope to find blizzards of dark-bodied, size 16 flies over their local riffles, and trout slashing at the surface in response.

Colorado anglers welcome the hatch, but with an eye on the snowpack in the mountains. When the snow melts, the rivers blow out and most fishing is over until late June or July. “The Mother’s Day Caddis signifies the arrival of spring, and it’s the last good dry fly fishing before spring runoff occurs,” says Pat Dorsey of Blue Quill Angler in Denver. “We have Mother’s Day Caddis on all of our western freestone streams. It’s a big thing out here in the west.”

Lots of fish are caught subsurface on pupa patterns, but to enjoy the dry-fly action, you need to be in the right place at the right time. “The hatch progresses a little bit upstream each day, and if you’re on the leading edge, the dry fly fishing can be good,” Dorsey says. He likes to skitter the Elk-Hair Caddis or the Puterbaugh Caddis.

Eagerly anticipated in the Mountain West is that king of the stoneflies, Pteronarcys californica, known to non-Latin speakers as the giant salmonfly. People plan vacations around its appearance, especially on the big rivers of Montana.

Like most stoneflies, the salmonflies don’t hatch in the water and drift on the surface the way mayflies do; rather, they crawl to shore and clamber onto rocks or reeds to unfurl their wings. This is when fishing a nymph of the appropriate size can pay off. Adults do end up on the water, but it’s generally when the females of the species return to lay eggs that dry-fly fishing occurs. Hit this right, and you’ll have a memorable experience.

The first salmonflies can show up as early as May, but the action on major rivers like the Madison and the Yellowstone tends to be in July. This kind of fishing involves a lot of report-chasing and intelligence gathering; astute observers keep track of which rivers are going good, and follow the progress of the two-week hatch from lower to higher elevations. Large dry fly patterns like the Stimulator and the Chubby Chernobyl can float the tumbling western currents, while big, dark nymphs like the Kaufmann’s Stone or the Pat’s Rubber Leg Stone will pull strikes among the streambed rocks for which stoneflies are named.

You may have heard of the Hexagenia limbata mayfly. It’s the one that hatches in such huge numbers that it is sometimes visible on Doppler weather radar. It’s the one they sometimes have to clear from bridges with snowplows. It’s the biggest mayfly anyone counts on for fishing, and both the trout and the fly-fishers of the upper Midwest are delighted to see it arrive in the summer. Anglers on Michigan’s Au Sable and the Manistee seek out big browns long into the night, casting toward the sound of rising trout in the darkness as two-inch mayflies flutter around their ears.

The Hex hatch calls for big dry flies, strong rods, stout tippets, and a headlamp. It also requires, even for serious and accomplished anglers, a fair amount of luck. As with other “blanket” hatches, when there are hundreds of natural flies on the water, it can be hard to get a trout to notice your fake one. The experts advise picking out one fish to target, rather than casting to every rise you see (or hear), timing the rises, and taking care to drop your fly in its feeding lane. Adding subtle twitching movement can also up your chances, since some trout seem to focus on those flies struggling especially hard to escape their nymph shucks.

Hex fishers use standard floating mayfly patterns—hackled, parachute, or Compara-dun style—in large sizes, and very often with bodies made of deer hair or foam that extend well back of the bend of the hook.

Read Next: The 25 Greatest Flies of All Time

Perhaps the country’s biggest hatch is also its smallest. From coast to coast and from spring through fall (and occasionally in winter), American trout feed on that informal category of mayflies known as Blue-Winged Olives. They can be as large as size 14, but olives are generally small flies, commonly 18-20 and sometimes as tiny as 26. They must be tasty because you’ll sometimes see trout feeding on little olives while ignoring larger flies on the same water. As the name suggests, the flies’ bodies are varying shades of olive, and their wings are a smoky blue. Their nymphs vary in size according to their species, but a “typical” BWO nymph is probably a size 18 Pheasant Tail. (It has been said that subsurface trout food basically boils down to 3/8” long and black.) The nymphs are good swimmers, by the way, so it’s worthwhile to swing and dart them along with the customary dead drift.

Olives are famous for hatching on dreary days. They’re often the first hatch in the still-cold days of early spring, and they’re still hatching when the rest of the mayflies are finished in the fall. Some species have multiple broods during the season. These important little flies are available to trout much of the time, and you should always have some small flies and 6X tippet to take advantage.