How to Catch Striped Bass with Giant Flutter Spoons 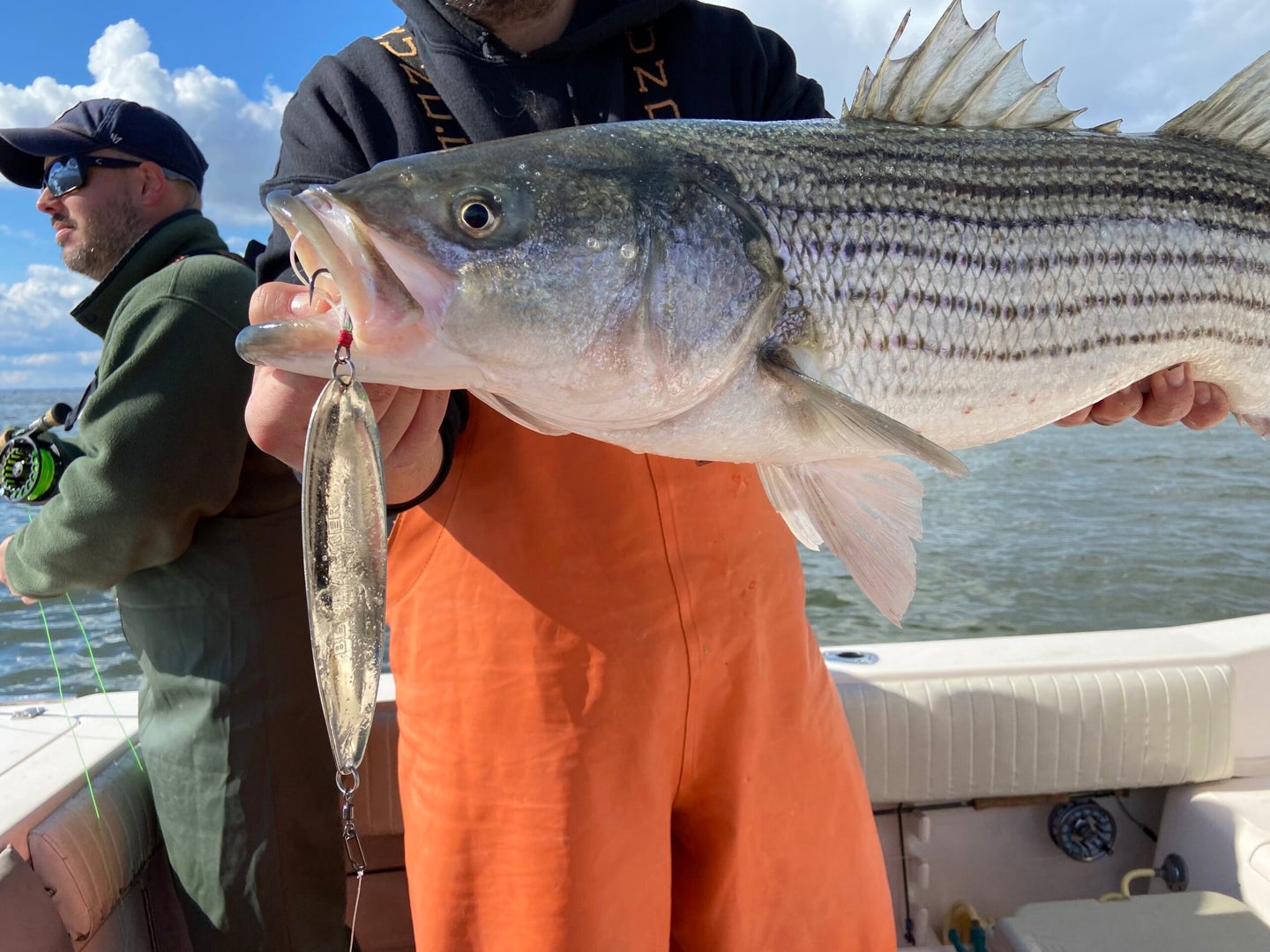 Flutter spoons are one of the hottest new lures to hit the striper scene in years. Joe Cermele
SHARE

When it comes to fishing lures, one of the greatest crossover success stories has to be that of the Creek Chub Pikie Minnow. Released in 1920, this long wooden plug with a heavy metal lip and seductive side-to-side wiggle was intended to hammer monster largemouths, pike, and muskies. What Indiana-based Creek Chub didn’t anticipate was that it would catch fire on the East Coast among surfcasters looking for something better than the metal lures and jigs of the era to fool huge striped bass in the waves. The Pikie was so potent that it became the model for countless famous striper plugs that followed in its wake. Now, more than 100 years later, another freshwater lure is quickly proving its worth in the salty striper scene.

That lure is (drum roll, please)…a spoon. I know what you’re thinking, spoons have been around forever. They have, but it took innovation in the deep-water largemouth arena to put a new twist on an ancient classic. Magnum flutter spoons are all the rage, but to understand why—and how they made the leap from niche freshwater lure to striper staple—we need to step back a few years.

A Fresh Spin on Saltwater Lures

In June 2014, half of the top-10 anglers fishing an FLW tournament on Kentucky Lake were using Nichols Lures Magnum Flutter Spoons. That same month, the lures also scored Bethel University’s fishing team a win on Pickwick Lake in a BASS College Wildcard Event. Measuring a whopping 8-inches long, this spoon had an uncanny ability to trigger strikes from huge largemouths suspending over deep ledges in summertime. Bass pro Ben Parker is attributed with figuring this technique out, which is why Nichols spoons bear his name. The thing about these giant slabs of metal is that they weren’t designed to put up numbers so much as size. On the fall, they flap and flutter wildly, and it turned out that if one flapped right past a suspended trophy’s face, it couldn’t help but take the shot. These huge spoons quickly became the next big thing in bass fishing, prompting companies like Jenko to release their Sticky Spoon, and Castaic to drop the Heavy Metal Spoon.

Part of the reason this spoon technique caught on was because it paired so well with modern electronics. “Video game fishing,” as some people call it, involved anglers using their side-scan, down-scan, and forward-looking scope to mark a single suspended fish, and then drop a lure right on its head. Older technology didn’t allow anglers to hit suspended fish with the same pinpoint accuracy—not to mention big, suspended loner bass were previously some of the hardest to fool. But giant flutter spoons flash so brightly and move so erratically on the fall, it was unlikely that a marked fish wouldn’t see one. Moreover, the action seemed to trigger a strike-first-ask-questions-later reaction from large, smart bass. The spoons stayed squarely in the largemouth lane up until about two years ago, when East Coast anglers targeting highly pressured saltwater striped bass were looking for a new secret weapon.

Striped bass anglers have been dropping Krocodile Spoons, Kastmasters, and countless others for decades. But none of the spoons that existed in the scene behaved quite the same as these new-school freshwater offerings. They are wider but less dense than many classic saltwater spoons. They consistently fall horizontally instead of zipping straight down vertically. While it’s hard to pinpoint exactly where Nichols and Jenko spoons first started being dropped for stripers, I noticed them infiltrating tackle boxes on Raritan Bay in the shadow of Manhattan first. For several reason, this was the perfect testing ground.

Raritan is relatively small, yet in both spring and fall, it loads up with stripers—big ones at that. It is, however, also one of the most pressured striper fisheries in the country given that it’s smack-dab in the middle of one of the highest population densities in the U.S. On any given weekend in season, Raritan is a zoo. Historically, it was common to find killer action jigging soft-plastic shads or diamond jigs only until the traffic got too bad and the fish scattered. When that happens—and I’ve experienced it countless times—getting small groups of marked fish to chew anything but a trolled lure becomes very difficult. Magnum spoons changed that so effectively, that they’ve become the newest staples in local tackle arsenals.

How to Spoon-Feed Striped Bass

I first started playing with flutter spoons just last season and instantly fell in love with the technique. Similar to how they perform on largemouth lakes, these spoons don’t catch a lot of little stripers—if one gets thumped, it’s typically by a 15-plus-pound bass. While these spoons represent everything from gizzard shad to trout in freshwater, they are the perfect size to match menhaden—a.k.a. bunker—in saltwater, which is a primary forage of large stripers coast wide in spring and fall. Also similar to the reactions they draw on lakes, striper anglers quickly figured out that even bass not in kill mode or actively feeding on a school of live bunker, could be triggered by one of these spoons waddling past its face. The first time I used one, I went 40 minutes without a bite despite dropping the spoon over suspended fish we were marking on the sounder. Then, I finally got it in front of the right face and the 30-pounder hit it so hard it nearly took the rod out of my hands. It was a highly addicting kind of bite.

I’ve since gone all in the flutter spoon just like most local striper anglers I know. In fact, I’d rather catch a few big fish spooning than 20 schoolies on small rubber shads or trolling umbrella rigs. If you end up purchasing some heavy metal, just make sure you don’t drop it on a rod that’s too stiff. I like a conventional rod with a slower tip and midsection so I can really feel every wobble and, more importantly, feel when that wobble stops because a big bass just inhaled the lure.

Braided line is also a must for the increased sensitivity, and if you find that you’re missing bites, don’t be afraid to add an assist hook to the lures top split ring. It’s an insurance policy that no matter how a striper grabs that chrome hunk, it’s getting the point.