In a new companion book to his father's own "A River Runs Through It," the author begins by hooking the trout of a lifetime 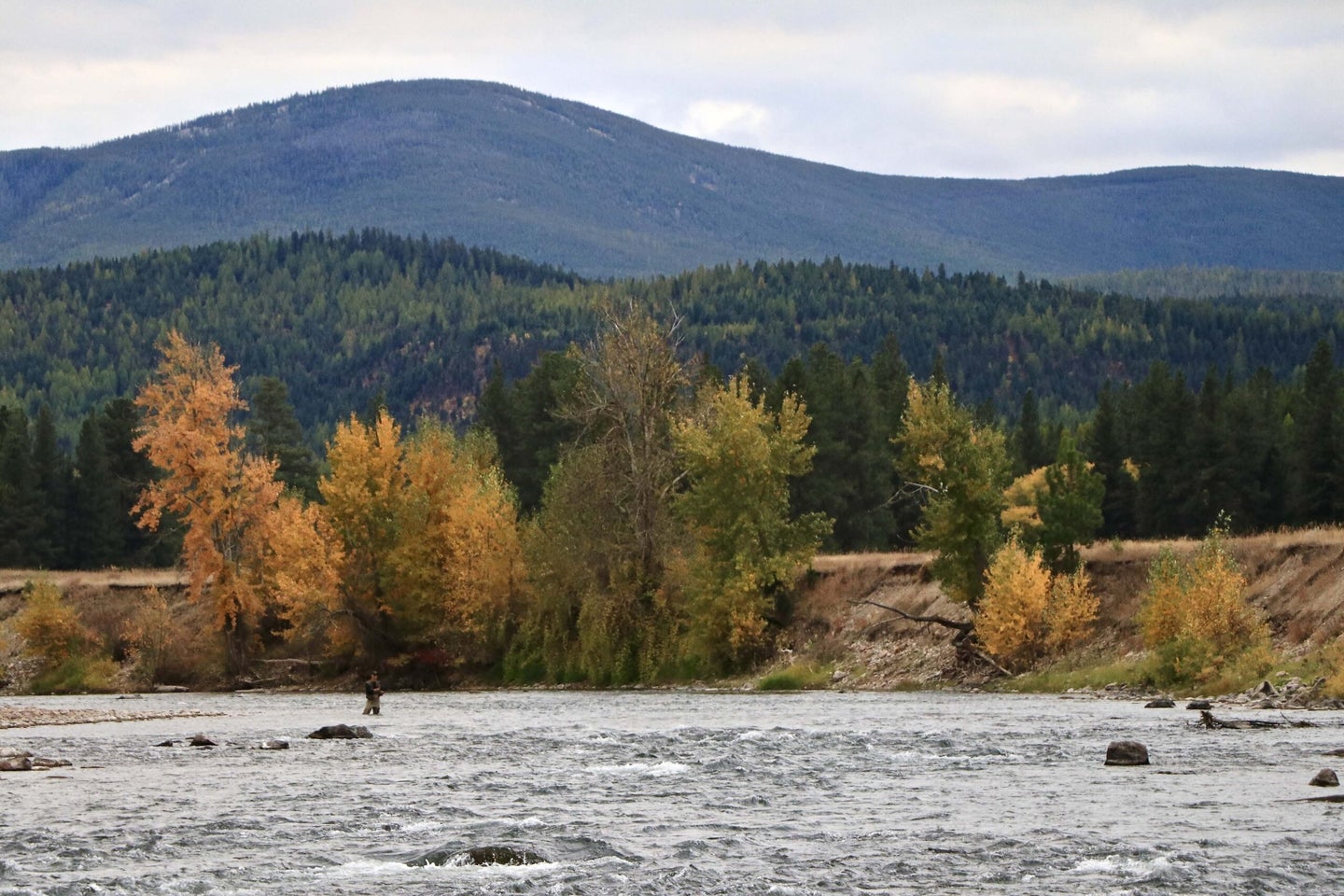 The author casts for trout on the Big Blackfoot River in Montana. Alec Underwood
SHARE

The trout rose in a smooth arc, took my tumbling salmon fly, and completed its curve in an undulating, revelatory sequence. A greenish speckled back and a flash of scarlet on silver along its side marked it as a rainbow. One slow beat, set the hook . . . in those first seconds I felt a connection to a fish of great size and power.

This could be the one.

I’ve fished the Blackfoot River in northwestern Montana from the time I was big enough to tag along with my father and the other men of my family, yearning for the day when I, like them, would catch an enormous rainbow trout, the river’s signature fish. Over the decades the heft of the rainbow necessary to reach that landmark had advanced with my age and proficiency, and I had never quite achieved it.

It was clear this trout would set the terms of the fight: he wasn’t a fish to be horsed. There were no logjams or iceberg rocks around, and he had deep waters to work with—the Muchmore Hole on the Blackfoot River in northwestern Montana, made famous by my father, Norman Maclean, in his novella, A River Runs through It. Old-timers will tell you there are several “Muchmore Holes” on the river, the very name speaking of bounty. (There are even more “Muchless Holes.”) This one, however, is named for the Muchmore family, who homesteaded here in 1895. It also perfectly resembles a description in the book, that of an epic fight my father had with a big rainbow, the fish rising in swirling foam from an apparently bottomless hole below a rock reef.

The features all match: The Muchmore Hole begins with a long and relatively shallow rapid. The water pours over a reef of rock extending unevenly for the width of the river. Past the reef, the river turns back on itself in a giant whirlpool for half its width, swirling foam covering much of the whirlpool’s surface. The other half of the hole, where I was fishing on that June afternoon, is a long, powerful rapid. When I was young, the Muchmore Hole was a great mystery, a place where the fish practically jumped into your basket—except there was no way for me to get there. When I asked my dad why we didn’t fish there, he told me he no longer knew who owned the ranch bordering that stretch of the river and couldn’t get access. But he also held many memories close, in a kind of time vault, to be reshaped and burnished without the nuisance of updates.

Long years after my childhood, the ranch earned a new owner, a Chicago businessman named Jay Proops. I’d struck up a friendship with him back in the Midwest where I worked as a newsman for the Chicago Tribune. When we first met, Jay and his wife, Kay, had just made a trip west to explore the actual scenes in my dad’s book, which they loved. They now dreamed of owning a ranch on the Blackfoot River. They’d found one, but the price was too dear. I encouraged them, though, and their business prospered, and eventually their dream came true, for me as well as for them. They bought the ranch, including riverfront on the Muchmore Hole, and they often invited me over to fish at their place, not far from our family cabin at Seeley Lake. When I finally saw the storied water, what had been for me a long-sought mirage, always beyond reach, suddenly became real.

The Muchmore Hole didn’t look promising on that bright and windy day when Jay and I walked down the bank to fish it. The sun played on the rushing water and gave it a hard metallic sheen. The fish most likely were down in the depths to avoid eyestrain. I set up my rod, waded out a few steps toward the long rapid on the near side of the hole, and shook out some line. Then I flipped a cast toward the top of the rapid, in a pocket where it broke over the reef. There I hooked the biggest rainbow I’ve ever seen on the Blackfoot. I carefully measured and weighed the fish in my mind: over twenty-four inches, more than six pounds.

Jay watched as the trout broached. “It’s like a salmon!” he shouted. He put down his rod and reached for his long-handled net.

This rainbow was big and strong, and he fought his battle in heavy water where he used the strength of the river to magnify his own. The line went taut to the reel—an old-style Ross Gunnison G2—which spun as the fish plunged and thrashed down the long rapid. The rod was a new one—a made-in-Montana R.L. Winston nine-foot, five-weight Boron III X—and I’d already lost fish adjusting to the famed soft action tip. The outfit was well suited to normal conditions, but this rainbow was exceptional from the moment of the rolling take. I followed along and kept the rod tip up and the pressure on, not hard but firm. When I was young, I lost a lot of big fish by not trusting the tackle— or myself—and holding on too hard, giving the fish a firm brace to shake off the hook. I could not lose this trout that way, I told myself. I’d spent too many decades pursuing this moment: the past haunted the present. In such a contest, seconds and minutes expand into timeless, defining moments.

A long battle is exhilarating for a fisherman but can be exhausting or even fatal for a fish, and a responsible sportsman tries to bring it to hand and release it without delay. The fish, however, gets a say in this. Jay waded out with the net and prepared for the capture, except the rainbow glimpsed the net and didn’t like what he saw. He broached and twisted as the current inched him downriver toward the net. Jay swooped up the net, but the trout was too big for it and sprawled half in, half out. He escaped back into the water and we had to start the process all over. Jay tried again with the net and failed once more. I began yelling at my friend because I couldn’t understand why he didn’t just net the fish and finish the thing. In a rush of anxiety, I tightened up on the line, the same overreaction that had cost me battles when I was a kid. I was about to lose the fish of a lifetime.