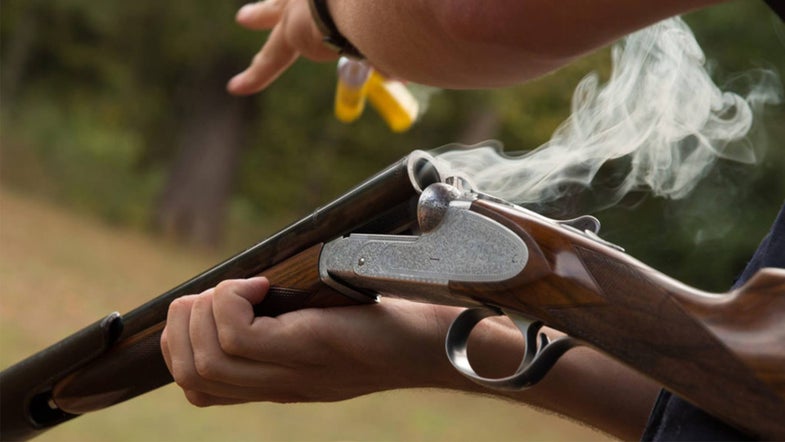 At a time when many 23-year-olds were graduating from college, Allen Treadwell was training for the Olympics. It was 2004, and as a competitive skeet shooter, the Missouri native had already set two national skeet-shooting records, been named the Missouri athlete of the year, and placed high in three skeet World Cups, in 2002. Today, his pedigree is only more impressive, including three appearances as a World Championship team member and 10 appearances as a World Cup team member. Treadwell now uses the insight he gained from competitive skeet shooting to help hunters and clay shooters improve their skills.

Barrett Sovereign and Field & Stream are hosting an upcoming sporting clays tournament on October 21 at Big Cedar Lodge in Ridgedale, Mo. During the tournament, participants can get advice and tips from Treadwell, as well as compete to take home a new Barrett Sovereign shotgun. You can purchase tickets online today. In the meantime, we asked Treadwell to share some of his hard-won shotgunning advice.

What separates a good shooter from a great one?

That’s a hard one. Athletes worldwide would probably stand in line if I had a simple solution for going from good to great. The honest truth is it’s either in you or it’s not. Practice, desire, will—it takes it all. You have to want it.

What’s the hardest bad habit for shooters to break?

In truth, the hardest bad habit to break is any that you allow to become a bad habit. It can be anything, in other words. That’s why it’s important for new shooters to have someone looking over their shoulder, to point out issues and to steer them in the right direction. That said, form is a big one. I see a lot of young shooters, especially, lean back to help hold up the gun, but it’s hard to be on offense in a defensive stance.

RELATED: The Mental Side of Skeet Shooting

How do you stay calm while shooting in high-pressure situations?

Years ago I was in a sudden-death shoot-off, where if you miss you lose. I was competing for 1st place, and I was going up against a big name. We drew for shooting positions, and I drew second. As my competitor was shooting, I looked at my left hand, and it was shaking uncontrollably. I thought to myself, Why? This is what I train for, this is a situation I want to be in. Don’t be nervous, embrace it, enjoy the moment—this where you want to be. I literally watched my hand stop shaking and then went on to win the shoot-off. That’s the last time I had a problem controlling nerves.

Shooting a shotgun should be instinctive. That’s the main thing to keep in mind. And to do that, you need to keep both eyes open. The first thing anyone starting out needs to do is find out which eye is dominant. If you’re right-eye dominant, shoot from the right side. If you’re left-eye dominant, shoot from the left. That allows you to leave both eyes open and be as effective as possible. Then, when you’re ready to fire, look at the target you want to hit instead of at your sights. Never look at the barrel, like you would with a rifle. I use the example of throwing a baseball. If I’m going to throw a baseball to a catcher’s mitt, I’m not going to look at the ball in my hand; I’m going to look at the mitt I’m throwing to. So, stare at the target like you would at a catcher’s mitt.