Does all that money just buy bells and whistles, or is there really something to dropping a few bills on a 1911? 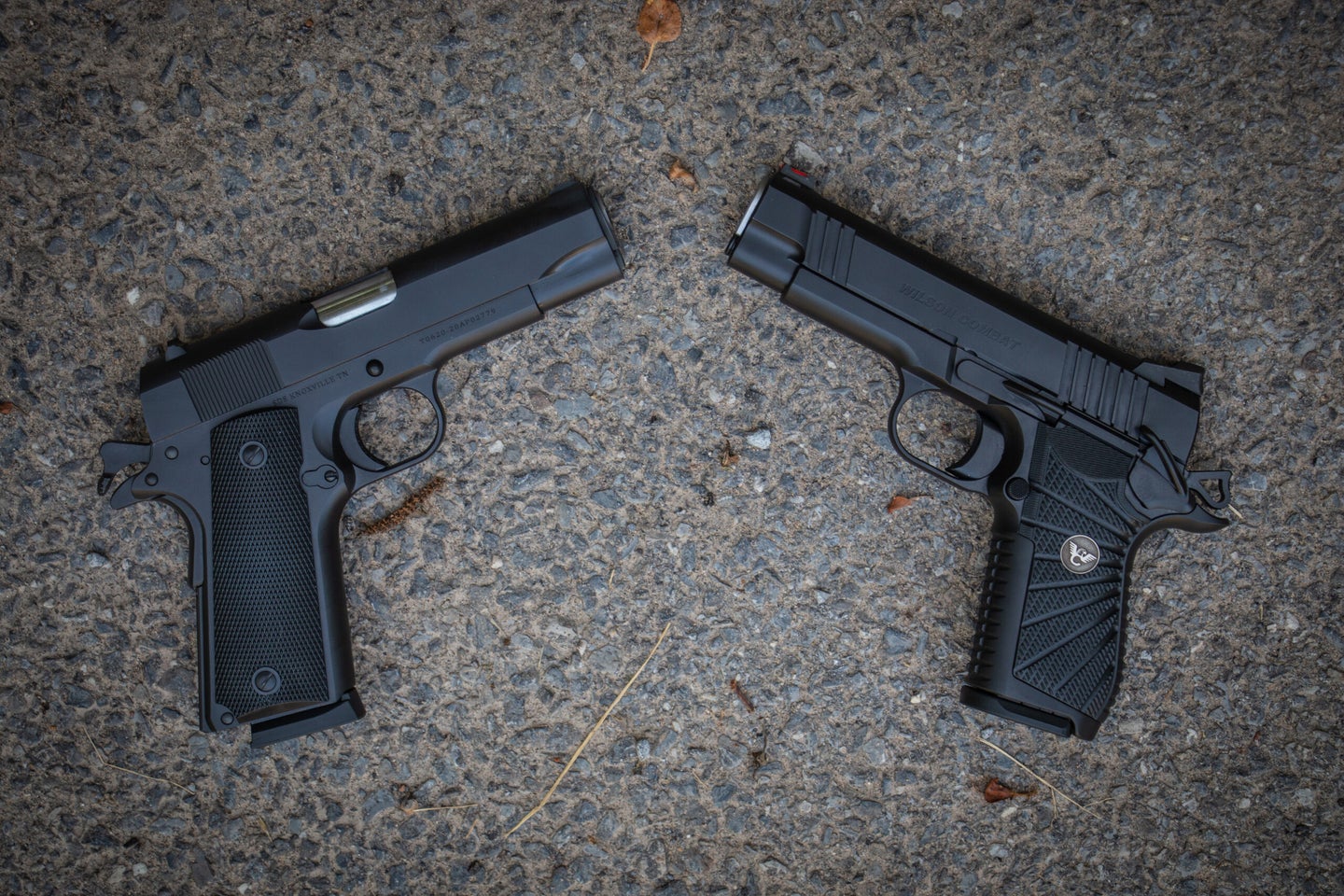 The 1911 is often considered a real man’s gun or the pistol of a professional. Prices range from less than $500 to beyond $5000, and that’s before gold inlays, engraving, or genuine ivory grips are added in. Nighthawk’s Turnbull VIP 1911 retails for $7999. Wilson Combat’s more practical X-Tac Supergrade Professional starts at $4795. And Springfield Armory’s Ultimate Carry Handgun will cost you $3395.

But there’s another end of the spectrum. Springfield also offers more than 50 other 1911 models with prices as low as $640. And SDS Imports offers Turkish-made 1911s starting at only $409. How can one type of firearm go from being that cheap to having prices equivalent to the cost of a good used pickup truck? It’s all about what’s going on under the hood.

Why Some 1911 Handguns Are So Expensive

After the foundation of the International Practical Shooting Confederation (IPSC) in 1976, the 1911 rose to prominence as the best platform to use for building competition handguns. Men like Bill Wilson, who founded Wilson Combat, became masters at expertly tuning the more than 50 parts of the 1911. Competitors at the World Shoot, and even those in small town combat pistol matches, were willing to drop lots of dollars for even the smallest competitive edge. Ultimately, some competition-driven modifications found their way to carry guns. You can now get a 1911 any way you want it.

Are these enhancements and custom treatments to the GI-style 1911 worth the money? Yes and no. As the popularity of the 1911 skyrocketed in the last part of the 20th century, low-cost versions became available to meet the demand. Due to poor quality control and the use of less-than-ideal materials and parts, these bargain guns gave 1911s a bad reputation. This pushed consumers to high-end variants and to custom gunsmiths. Ultimately, the 1911 developed an underserved, if-it’s-not-custom-it-won’t-work, reputation. To some extent that belief still exists but it’s not necessarily the case.

If you look at the 1911-A1 Tanker imported by SDS Imports you’ll find a very reliable, less-than-$500 handgun. Where this pistol is lacking is in the inclusion of many of the upgrades gunsmiths like Bill Wilson made popular. The sights are small and hard to see. The combination of the standard GI grip safety and GI hammer will painfully bite the web of large hands. The thumb safety is small and non-ambidextrous. The slide-to-frame and barrel fit, while good, is not optimal for the highest level of precision. The grips are unattractive and plastic. And, maybe just as importantly, by modern 1911 standards, the gun has a plain and utilitarian look.

On the other hand, if you look at the Wilson Combat Experior Compact Double Stack, which retails for $2995, you’ll find a very attractive pistol that’s been optimized for shooter interface and operation. It’s built on the magnificent Wilson Combat modernized 1911 EDC X9 platform that does away with the grip safety. The sights are bold and easy to see. The trigger action is magnificent. The grip is wrapped in G10 scales, and the front strap has an aggressive checkering pattern to help you hold the gun with sweaty or even blood-covered hands. Fit is impeccable and the pistol is optimized for accuracy and reliability. It also holds 16 rounds of 9mm as opposed to half that many .45 ACP cartridges.

But a custom 1911 is not just about appearance and modernization, it’s about perfection. It’s about the assurance the gun will work with any ammo you put in it. It’s about a trigger that seems to break by will alone. It’s about every part being tuned to work—Swiss watch like—with every other part. Even affordable 1911s will probably shoot better than you can, but a customized 1911 can shoot better than anyone can. And a plain GI-style 1911 can be customized to run like a top and drive nails, but still look like the gun your granddaddy took to war.

Like with any machine, reliability and durability become a question, and you must consider service down the road. Just like a Hyundai or a Bentley, all guns can have issues and even break. You know builders like Wilson Combat will stand behind their guns, and many first-time gun owners are going that route because, like with all machines, parts optimized to work together perform better, last longer, and need less maintenance.

Affordable GI-style 1911s that are reliable can be had from SDS Imports, Springfield Armory, Colt, and others. They may be finicky with certain loads, may need minimal tuning for optimal reliability, and small internal parts may or may not excessively wear or break after 500 or 5000 rounds. Just like the cheapest cordless drill or lawnmower, inexpensive handguns are inexpensive for a reason. The money you spend may not guarantee performance but generally does equate to good service.

Read Next: Why The Model 1911 Will Never Die

Which 1911 is right for you? If your wallet is thin, the SDS imported 1911-A1 Tanker is reliable and accurate enough for self-defense. Will it last a lifetime? Maybe, maybe not. Most who start at this level upgrade before they find out. At $1499, Colt’s Combat Unit model may not be any more reliable or durable, but the shooter interface is greatly improved as is pride of ownership.

Custom-made 1911s are the most precise fighting pistols made by man. You’ll spend $2500 plus to get there, but buyer beware. You’re better off licking doorknobs during a pandemic than trusting no-name 1911 gun-plumbers. And finally, like the pearl-handled pistol of pimp, as prices pass three-grand on a custom 1911, it’s mostly an exercise in vanity.

A GI-style 1911 can save your life and last just as long—the U.S. Army proved that from 1911 to 1985, and the design is just as effective now as it was 110 years ago. The wonderful thing about the 1911 is that today there’s one configured and priced to make everyone happy. You can have it box-stock and wearing blue jeans or blueprinted and dressed in a tux.

Field & Stream is dedicated to covering safe and responsible gun ownership for hunting, recreation, and personal protection. We participate in affiliate advertising programs only with trusted online retailers in the firearms space. If you purchase a firearm using the links in this story, we may earn commission.