If you're looking for a tough, no-bs waterfowl shotgun that's also a great deal, the Benelli Nova might be the one for you 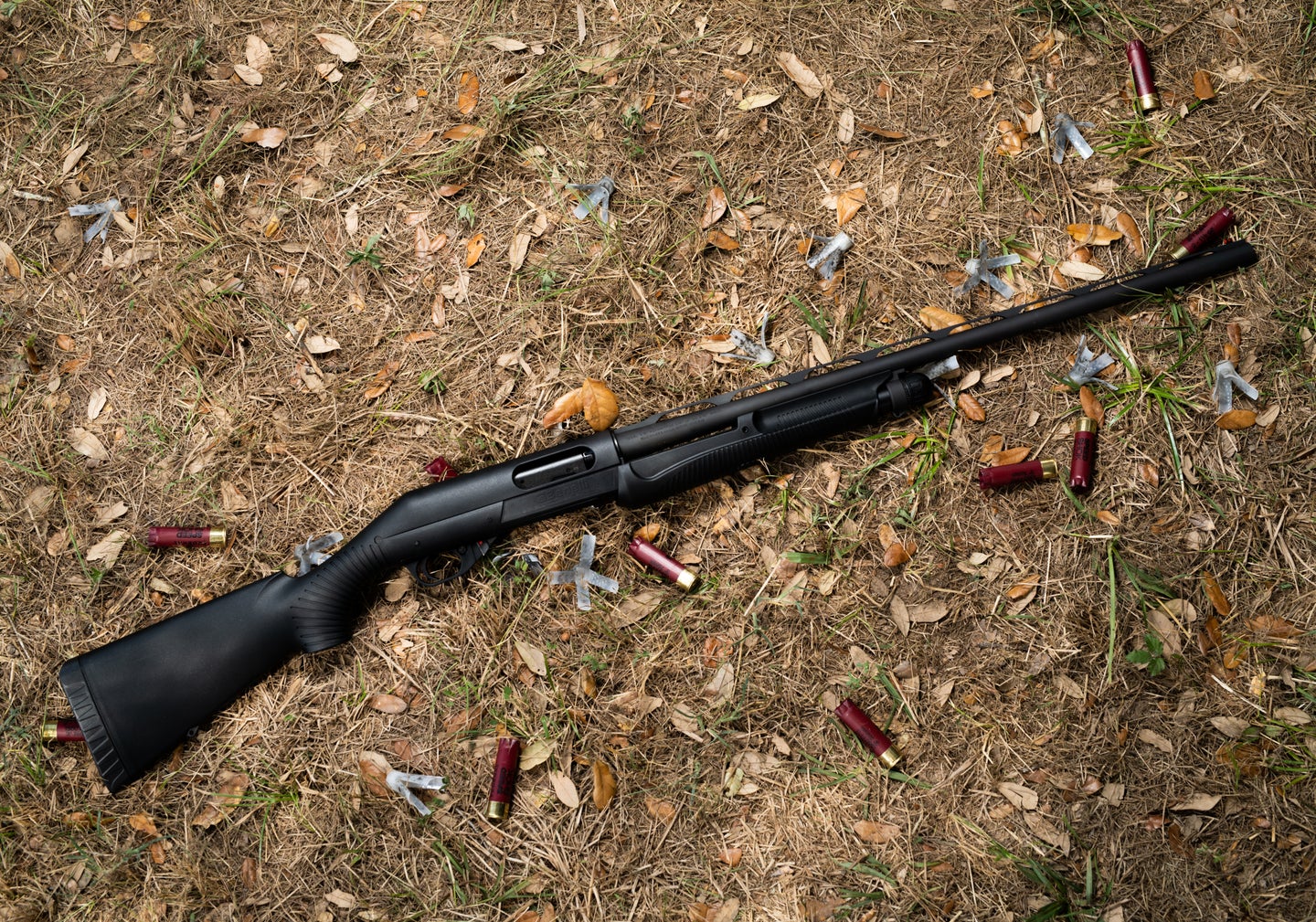 Slide actions still have a strong following among duck hunters and a definite place in a waterfowler’s battery. Even those who favor a semiauto as their main gun need a pumps for the days when the weather that will choke an autoloader—or on any hunt where you really don’t care what happens to your gun. Pumps can take abuse. Our duck gun test included the tough, affordable, unusual, Benelli Nova among more standard offerings from Remington, Mossberg, and Browning.

The Nova is unique in several ways, starting with the fact that it’s Italian. Pump guns have always been almost strictly an American preoccupation. We invented the pump gun, back in the 1880s. We perfected it several times over—first with the Winchester Model 12, later with the Remington 870. We hunted with pumps, shot clays, used them for home defense, and taken them to war. Americans love pumps because they are rugged, reliable, work in all weather, and don’t cost much. Pumps suit us.

Europeans, by and large, have always viewed pumps with indifference or even disdain, which made the Italian-made Benelli Nova even more of a surprise when it debuted in 2001.

When Benelli decided to make a pump, they did it in typical Benelli fashion: They made a pump unlike any pump anyone had ever seen. The stock and receiver were a single piece of polymer, which was unheard of. It had typical Benelli concept-car styling. The Nova remains distinctive today, but 20 years ago it looked like it had come back from the future. I had one of the early Novas, which a friend dubbed “the Darth Vader gun” for its black finish and menacing appearance.

Unlike other Benellis, the Nova was inexpensive and it caught on among waterfowlers. Some of them always wanted to own a Benelli and now could afford one. Some who wanted a gun that looked different. Anyone who bought a Nova for its durability and smooth stroke.

The Nova originally debuted as a 3 ½-inch 12-gauge hunting gun, and now there are tactical models as well as a 20 gauge, and a Super Nova—a 3 ½-inch 12-gauge gun that retains the Nova’s aggressive styling but has a traditional two-piece stock and receiver.

Nuts and Bolts of the Benelli Nova

Specs on the Benelli Nova

Benelli introduced the Nova in the mid-1990s. It was made for law enforcement originally before hunting models were developed for the U.S. market. The Nova’s one-piece stock and receiver set it apart from any shotgun ever made. The unit is molded around a steel cage that reinforces the frame without adding excessive weight. Like Benelli’s famous inertia guns, the Nova has a rotary bolt. Since the rotary bolt locks directly into the barrel, it requires neither a barrel extension nor a steel receiver, which is one reason the Nova can have its polymer stock/receiver. The other advantage of the rotary bolt is that they contribute to an extremely slick, fast pump stroke. Combine that with a forend that extends all the way back to the front of the receiver where it’s easy for anyone to cycle, and you get a very smooth-running pump.

The Nova had a couple of other unique features. It was the first shotgun to include a sling swivel stud molded into the stock, which is now common. It also had a magazine cutoff button on the bottom of the forend. Push it and work the slide, and the shell in the chamber ejects and the other two shells remain in the magazine tube. It’s a handy feature if you want to quickly drop in a goose load—or if you just want to open the action to keep the gun safe as you cross a fence or obstacle. A nipple on the tip of the magazine cap doubled as a punch for popping out the trigger group pins so you can disassemble the gun in the field if need be.

How We Tested the Nova

We tested the Nova on the clouds of teal at the Pintail Hunting Club in the mornings, and shot it at the lodge clays range. We tested the gun for both point of impact and to see how it patterned with hunting loads at 35 yards. We weighed it, measured, and checked the trigger pull. Our test gun shot slightly high, and it recorded a 66-percent pattern with 3-inch, 1 ¼-ounce Federal No. 2s with a Modified choke, which is about what you should expect from that choke/load combination. The gun weighed 7.7 pounds, and that weight is a good thing in a fixed-breech gun that otherwise doesn’t offer any recoil reduction. Some heft makes a gun like the Nova easy to shoot, too. The trigger broke at 7.14 pounds, which is on the heavy side, but a definite improvement over my old Nova (one of the very early ones) that had a trigger close to 10 pounds.

In addition to the tests we conducted at Pintail Hunting Club, I owned and shot that early Nova as my primary duck gun for several years, and I took it turkey hunting a time or two as well. During the years I had it, I dropped it in the mud and, on one occasion, onto some large chunks of riprap. That fall would have gouged or scarred any other gun. The Nova shrugged it off and was no worse for the wear save a slight road rash on the plastic receiver.

Novas always handled well for me, and this one was no exception. It’s an easy gun to shoot, and that long forend allows me to take the short grip with my front hand that I prefer. It also makes the gun easy to pump. And, like all Novas, this one cycles like butter. You’re barely conscious of giving the forend a flick, and the gun is reloaded and ready to shoot again.

The heavy trigger never bothered me, except when I took the gun turkey hunting, when I managed to fill a tag with it anyway. You may not like the weighty pull, however, if you’re sensitive about triggers. What I disliked about the Nova’s ergonomics was the tiny safety button at the front of the trigger guard. I can’t remember the button ever costing me a shot, but I worried about not being able to find it with my finger all the time.

Even 20 years later, the Nova still looks contemporary, not dated, although a few guns have copied its look. Although the Nova’s lines aren’t for every taste, I like the way it looks—although you could argue that the plastic receiver is a bit bulky looking. It’s hard to comment on the “workmanship” of a gun that is scarcely touched by human hands at the factory. But, like all Benellis, it is a well-made gun with the exception of the slide release, which is a cheap-looking stamped part.  Also, the forend rattles. Many people complain about the Nova’s noisy forend. My feeling was always that anything close enough to hear the rattling forend was already close enough to shoot at, so I never paid it much mind.

To me, the Nova is a dedicated waterfowl gun. With its heft, its durable plastic covering and its 3 ½-inch chamber, it fits right into the blind. There’s even an optional stock-mounted recoil reducer you can add for serious 3 ½-inch magnum shooting. I did use mine for turkeys, with magnetic sights fixed to the rib, and it delivered the goods, although it wouldn’t be my first pick due to its trigger pull. A Nova would work for pheasant hunting if you didn’t mind the weight, and I always enjoyed shooting skeet with mine due to the smooth stroke and the forend that let me hold it the same way I hold a target gun. The Nova could serve as a home defense gun, albeit a fairly long one, or you could buy the tactical model.

Also, the Nova isn’t a versatile gun in the sense that there’s not much you can do about it if the gun doesn’t fit you out of the box. Synthetic stocks are difficult to lengthen or shorten, and the one-piece stock/receiver design means there’s no way the Nova can be shimmed. It either fits you or it doesn’t.

We experienced no function problems with the Nova, and mine worked well for years—although eventually I had some trouble with its magazine latch. And, as I mentioned, I dropped mine on large rocks. It bounced, it clattered, and it kept right on working. The Nova is durable, reliable gun. Although it is made to be abused, if you take that abuse to an extreme and break the stock, you’re stuck, as the stock and receiver are one piece, and you’d have to new gun. If that bothers you, move up to the Super Nova.

At $449, the Nova isn’t the cheapest pump around, but it’s close. And it’s a gun with a proven track record. What it may lack in versatility as an all-around gun, it makes up for with ruggedness and shootability. If the one-piece stock bothers you, it’s only $110 more to move up to the Super Nova, which has a stock that can be replaced or shimmed, and the recoil-reducing ComforTech system, all for $110 more.

What the Benelli Nova Does Best

What the Nova does best is hunt ducks and geese. It’s a tough, no-nonsense gun with some unusual features like the cutoff button in the forend and the bulletproof (or at least, riprap-proof) receiver. Chambered for 3 ½-inch shells, if you care to shoot them, it’s a gun that you can take on any waterfowl hunt and not be under-gunned. With its very smooth-cycling action, it’s easy to make followup shots with, too. And, I always enjoyed mine for skeet practice, although I wouldn’t shoot it in competition.

What the Nova Does Worst

The Nova is a heavy gun, and not the best choice for taking into the uplands. Its trigger pull doesn’t completely disqualify it for turkeys, and there is a 24-inch-barreled model that would work in the woods, but it wouldn’t be my first choice. The steel-reinforced plastic receiver isn’t drilled and tapped but it can be done by a gunsmith. And, if you break your stock, which would take some doing, you are out of luck. Replacing it is the equivalent of buying a new gun, as the stock/receiver is the part with the serial number engraved on it and you would have to buy it through a licensed dealer.

The Nova caused a stir when it was first introduced with its unique design and lines. It has gone on to establish itself as an excellent choice in a low-cost pump to compete with the 870 and Mossberg 500. If imitation is the sincerest form of flattery, remember that Remington offered a 3 ½-inch pump gun entirely clad in plastic, barrel and all, called the 887. Internally, Remington execs called the 887 the “Nova Killer” but the Nova is still around and pumping, and the 887 is long gone. The Nova—heavy trigger, rattling forend and all—still makes a great choice in a durable, affordable duck gun.