The Browning A5 isn't exactly a "value" gun, but it is an excellent shotgun that gives modern duck hunters what they want—lightweight, dependable firepower 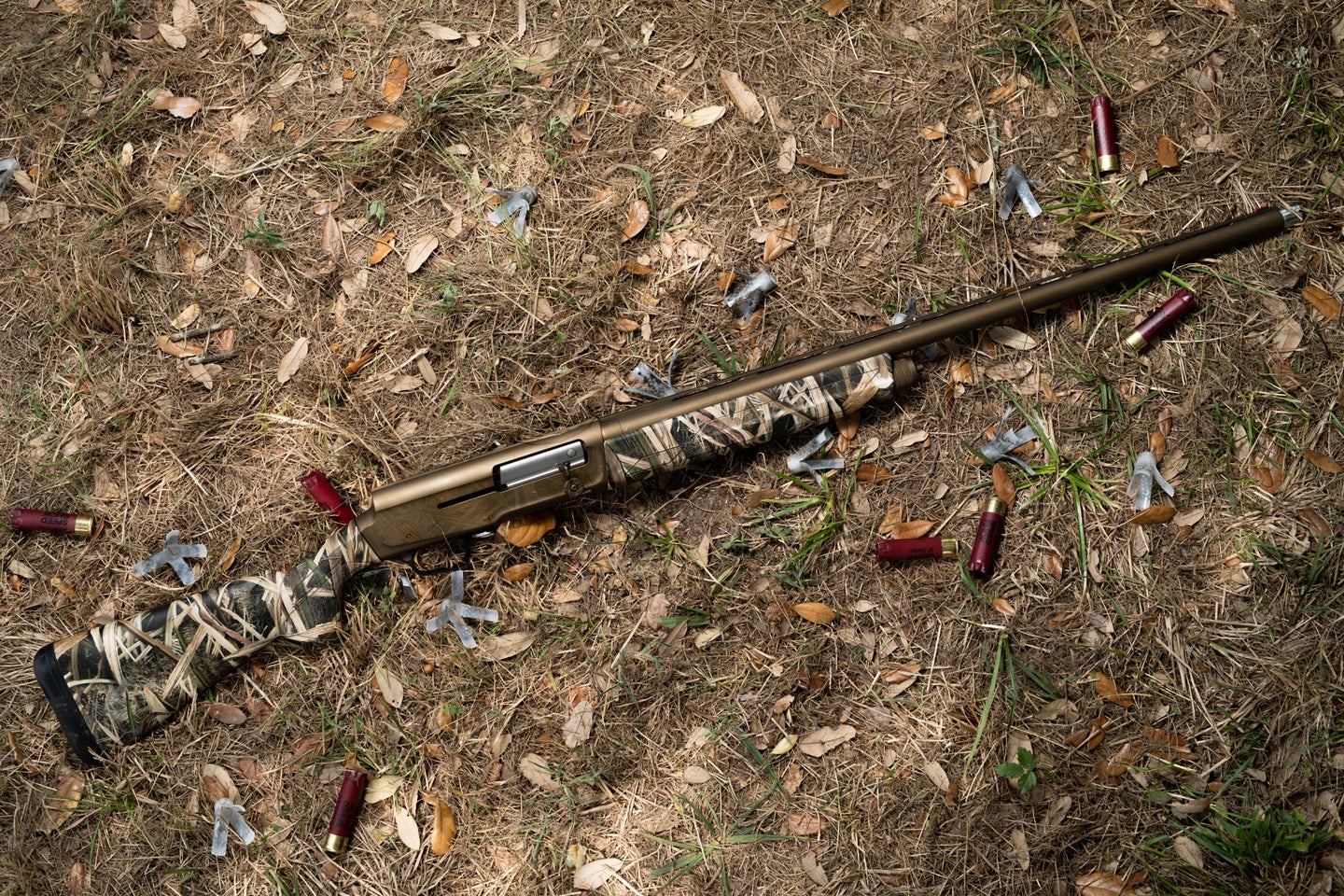 The author's personal Browning A5, which our test team put through the ringer in Texas last fall. Stephen Maturen
SHARE

The Browning A5 shares a profile and a nickname with John M. Browning’s classic Automatic 5 semiauto, but inside it’s a different completely different gun. The new A5 is an inertia-operated shotgun, much closer to a Benelli than to any other Browning that ever existed. That said, having shot the A5 both at home and during our duck gun test at Pintail Hunting Club, I know John Browning would recognize the brilliance of its design. He would be proud to have the Browning name on this gun, which performed quite well throughout our test and is built to Browning’s high standards.

Although John Browning invented the semiauto and his original design remained in production for almost 100 years, the Auto-5, while beloved, was also outdated by the time Browning stopped making it in 1998. Its replacement, the Gold, was a soft-shooting gas-operated gun. It eventually became popular (although perhaps more popular in its Winchester-branded versions as the Super X3 and X4), but Browning customers missed the Auto-5 and the extra reliability of a non-gas action. There was room in the Browning lineup for another semiauto, and when Benelli’s patent on inertia operation expired, Browning seized the opportunity to offer an inertia gun of its own. Therefore the A5 has little other than superficial appearance in common with the long-recoil operated Auto-5.

The A5 comes in 3 ½- and 3-inch 12 gauge, as well as in a “Sweet 16” 16-gauge version. The guns are available in walnut and blued steel, black synthetic, and camo. The most expensive model is the Wicked Wing version we tested (and one of my personal guns) that features camo furniture and bronze Cerakote metal, including a faint two-tone camo pattern on the receiver and an enlarged bolt release button.

Nuts and Bolts of the Browning A5

As an inertia gun, the A5 works exactly like a Benelli, with the same strengths and weaknesses. Upon firing, the gun moves backward and the heavy two-piece bolt remains stationary of its own inertia. The bolt actually locks tighter as the gun recoils, while a heavy spring inside the bolt compresses, then rebounds, sending the bolt back after the shell has fired. Inertia guns are famous for their reliability, especially under adverse weather conditions, and for staying clean, because no gases are used to drive the action, so there is no carbon buildup in an inertia gun as there is in a gas-operated gun. On the downside, inertia actions don’t do much to mitigate recoil, and the guns are often light, so they can kick hard. It’s also possible to bump an inertia gun out of battery, resulting in a first-shot misfire.

The A5 has the squared-off, humpback profile of the original. It also features Browning’s Speed-Load two-piece carrier that allows you to thumb a shell into the magazine and have it whisk up into the chamber, as well as the Turn-Key magazine plug that you can take out of the magazine tube with only a car key, and without the risk of launching a magazine spring.

Another difference between the Browning and other inertia guns is a very conveniently placed carrier release button (the button you push to make the bolt lock open) just in front of the trigger guard. The safety is large and very easy to switch over for left-handed operation, too, just as it is with the Browning Maxus. The A5 also features Browning’s Inflex recoil pad with a no-stick insert in the top and a series of baffles inside designed to direct recoil away from your face.

The trigger broke at 6.9 pounds, which is heavier than is ideal, but the pull was short and not gritty, so it had that going for it. The A5 uses Browning’s DS choke tube system, which features a split brass ring around the bottom to both better seal the bore to prevent plastic and carbon from building up underneath the tube, and to be easier to remove.

How We Tested the Browning A5

Our waterfowl gun test consisted of morning teal hunts followed by patterning sessions and lots of shooting at Pintail Hunting Club’s clay range. The A5 cycled 1-ounce target loads with no problem as well as 1 ¼-ounce steel and steel and bismuth HeviHammer ammunition. Among the four of us testing the gun, we put hundreds of rounds through it and didn’t experience any malfunctions or other problems with the A5. It will misfire, as will most inertia guns, if you bump the bolt out of battery, which happens rarely but does happen, say when you ease the bolt shut when loading to be quiet. I’ve done it by tangling a bolt handle in camo netting. Otherwise the gun ran perfectly.

How the A5 Performed

The Browning A5, like most inertia guns, is quite light. This one, with a 28-inch barrel, weighs in at 6 ¾ pounds. That is way too light for a 3 ½-inch 12 gauge (I’ve shot 3 1/2s out of this gun, and it’s an eye-opening experience), but its surprisingly manageable with 3-inch hunting ammo. I credit the gun’s fit, which is perfect for me, and the Inflex recoil pad, which really does seem to work. Long, light guns are often easy to shoot well, and this gun is no exception. Also, inertia guns have no springs or gas system parts up front, making them trim and easy to point with your front hand.

The controls are easy to use, too. Neither the action spring nor the magazine tube spring are particularly stiff, and the carrier doesn’t grab your thumb, making this an easy gun to load and unload. That doesn’t matter much on a 70-degree teal hunt, but it definitely matters in cold weather, and I have taken this gun out on some nasty days at home.

The gun is well-built in Browning’s factory in Portugal. The fit and finish is good, and the squareback lines of the gun are definitely eye-catching and appealing. Personally, as a wood and walnut person, I can take the camo and bronze Cerakote finish or leave it alone, but not everyone feels that way. One of the other hunters at Pintail Hunting Club offered to buy the gun from me on the spot as soon as he saw it. When I said no, he pressed his business card on me in case I changed my mind. There is no question this gun stands out in camp as well as it blends into the field.

The A5’s light weight and 3 ½-inch chamber, and it’s 50/50 point of impact says to me this is a gun you could take to the turkey woods in the spring. Likewise, it would be easy to carry in the field after upland birds. It cycled light loads well enough that it could serve as a dove gun. It proved its worth for waterfowl in Texas, as it has on other hunts for me—although I would like it to weigh quite a bit more if I planned to shoot a lot of 3 ½-inch ammunition. Nor would I pick this gun for serious clay-target shooting. Although I find it easy to shoot, the light weight and inertia operations mean it would kick too much for serious, high-volume clay use.

The Wicked Wing A5 that we tested sells for $2,159, which is a little bit more than you’d pay for a Benelli Super Black Eagle 3. You can get into a 3-inch, black Stalker A5 for $1,659, but even at that price, it’s hard to call the A5 a “value” gun. If I were buying an A5, I’d choose a 3-inch gun and save $140 or so, since the guns are so light I would never shoot 3 1/2-inch shells out of it anyway. There are other inertia guns on the market that sell for less, too, so if there’s an area where this gun falls down, it’s value.

What the Browning A5 Does Best

The A5 is a duck gun, but it’s light, trim, and shootable enough to serve as an all-around hunting gun and it’s extremely reliable and easy to shoot. I actually prefer it slightly to most other inertia guns for the ease of loading, the safety, and for its dead-on point of impact. Browning guns are known for their quality, and the A5 is a well-made shotgun.

What the A5 Does Worst

Much as I like the A5, it’s not perfect. It’s an expensive gun in a market with many other reliable inertia guns. The light weight that makes it a breeze to carry also means it kicks hard with the heaviest loads. Although, as noted, the Inflex pad does work and does help mitigate recoil. Finally, if you compare it head-to-head with the SBE3, which is fair, as they are similar guns at similar prices, the A5 lacks the SBE3’s Easy Locking bolt, which completely does away with the out-of-battery misfires that afflict inertia guns.

Final Thoughts on the Browning A5

Generations of hunters grew up looking over the square back of a Browning receiver. The A5 gives them that familiar view in a new, lighter, equally reliable shotgun. The A5 suits what modern duck hunters want, which is lightweight, dependable firepower. The A5 delivers that in warm conditions and in the cold, and in any finish you might prefer, from walnut to black synthetic to camo to the Wicked Wing camo and Cerakote finish. It is a pricy gun, but one you won’t regret if you splurge on it—unless you plan to shoot a lot of 3 ½-inch ammo.

Our test team all liked the gun very much, but, of course, we were just testing it, not buying it. It remains up to you to make the decision to pony up for the A5 or not. But if you do, long after the money is forgotten, you will still own an excellent waterfowl gun.