To be effective on whitetail deer, you don’t need to tote a 12-gauge shotgun 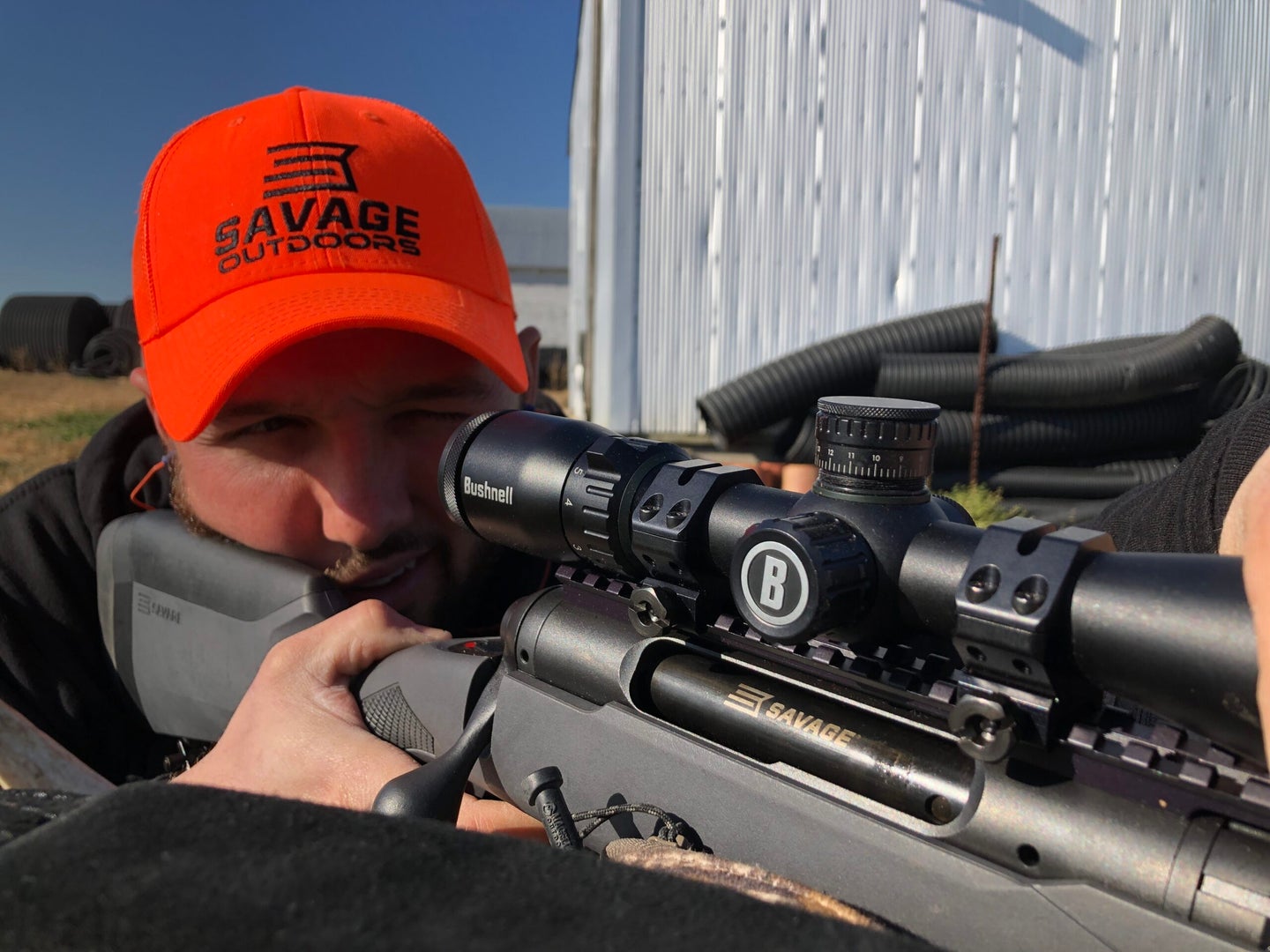 Bigger isn’t always better, and recent advances in slug technology have hunters ditching the 12 gauge in favor of the svelte 20. The downsized slugs hit nearly as hard as their larger counterparts, and can offer 200-yard performance in the right gun. As a bonus, the guns that fire them are lighter, which makes long hikes to the stand more pleasant. Below is a list of proven 20-gauge guns, from legendary to utilitarian.

The problem with most slug guns is that they have a shotgun trigger. Savage solved this by putting its excellent AccuTrigger into the 220, giving shotgun hunters user-adjustable pull weights all the way down to about a pound and a half. The similarities to Savage’s rifles don’t end there, as the 20-gauge slugger is built in much the same manner as the 110 series. The free-floated button-rifle barrel is threaded into the bolt action, ensuring consistent head spacing. This makes the 220 is more accurate than a factory slug gun should be; I’ve put five Lightfields inside an inch at 100 yards with mine and it will shoot minute of deer way further than I’d ever poke at a living creature. They can be a little fickle with ammo selection; and you’ll want to put a few varieties of slugs through to find what it likes best. The ergonomics can be tailored to the individual shooter using the AccuFit system, which allows for easy length of pull and comb height adjustments. Other notable features of the 220 is the one-piece rail that allows for solid scope mounting and the detachable box magazine. The 220 is a bargain at only $569.

Most dedicated slug guns are bolt actions or pumps, but it doesn’t have to be that way. Benelli created a downsized version of the M2 some years ago giving sub-gauge shotgunners access to the inertia system that has made the Italian autoloaders so popular. The fully rifled barrel is fitted with iron sights, and the receiver is drilled and tapped so you can easily add the optics of your choice. You’re unlike to loose a torrent of slugs, but if you do, the same ComforTech stock that waterfowlers find so enjoyable will soak up recoil and get you back on target quickly. The buttstock allows you to swap in optional raised comb pads to aid in getting the correct cheek weld for whatever optic you mounted, and switch buttpads to adjust length of pull. Originally designed with marshes in mind, the synthetic stock will shrug off wet weather and is dimpled for a sure grip. It’s pretty easy to tote, at only 6.5 pounds. Expect to pay around $1,559 for the 20 gauge M2 slug gun.

It’s hard to have a conversation about slug guns and not mention Ithaca. The Ithaca Gun Company introduced the first dedicated slug gun way back in 1959, and those models can still be found on gun racks in shotgun counties throughout the East. The original Deer Slayer was a smoothbore built on the company’s Model 37 action, but it featured iron sights and a chamber tuned to make the most of the Foster slugs available at the time. The addition of a rifled barrel in 1988 gave a boost in accuracy, but the rest of the gun remained unchanged. In 1996, the platform was completely revamped with the introduction of the Deer Slayer II. For greater accuracy, Ithaca ditched the removable barrel design typical of shotguns in favor of a free-floating barrel that threaded into the receiver to provide secure lock-up when the bolt was brought into battery. The only downside was the weight, tipping the scales around 12 pounds. The latest iteration, the Deer Slayer III, is a much trimmer affair thanks to advances in CNC machining processes, weighing only 7 ¾ pounds in 20 gauge. Ithaca claims four-inch groups at 200 yards, due in large part to the excellent rifled barrel and trigger that breaks around five pounds. You can get your choice of wood on these, from basic Grade A Walnut up to fancy AAA. Price varies from $1,399 to $1,949, depending on furniture.

Thompson Center set the handgun hunting world ablaze with the introduction of the Contender pistol in 1967. With a single receiver, hunters could swap barrels for a variety of calibers—even rimfire. The handgun would eventually be fitted with a buttock and longer barrel, giving hunters a handy single shot that could take a variety of game from woodchucks to mountain lions. The company would later produce the Encore, a beefed up version of the break action receiver, better suited to the punishing recoil of magnum rifle rounds. The Encore’s versatility was later extended to black powder, and shotgun slugs. Today, the Encore Pro Hunter is the gold standard in single shots, with stainless construction and synthetic furniture designed to soak up recoil. Fitted with a 28-inch rifled barrel, it makes a highly accurate slug gun. You can also purchase additional barrels—even muzzleloading ones—to extend the usefulness of the Encore through a variety of seasons. Expect to pay around $890 for an Encore.

Mossberg pump guns have long been the middle infielder of the shotgun community: a utility player that can handle a variety of roles. The 500 has been around for over 50 years, with over 10 million rolling off the assembly line. With a relatively low price point and reputation as a workhorse, the 500 made its way into gun cabinets and equipment lockers everywhere. For less than $500 you can pick up a 20 gauge with both a rifled slug barrel and a smoothbore to handle bird duty. The rifled barrel features a cantilever mount so zero won’t be affected every time you take it off. Unfortunately, this arrangement doesn’t provide the secure lock up of the others on the list; so don’t expect MOA accuracy from this one. But it will deliver slugs with enough precision to reliably take deer at the ranges common in most slug gun regions. A removable comb riser ensures your eye lines up properly with your optic. Youth sizes are also available, making the 500 an excellent choice for a first shotgun that can be used all season long.

The Ultra Light Slug Hunter in 20 gauge was the gun of choice for hunters looking for an inexpensive and accurate slugster, but I haven’t been able to find one in stock for years despite still appearing on Harrington & Richardson’s site. Connecticut Valley Arms is looking to fill that hole in the market with their CVA Hunter, carrying a suggested retail price of only $260. But despite the low price point, the Hunter offers plenty of accuracy. It’s perfect for lefties, with an ambidextrous stock and a reversible hammer spur. The barrel breaks easily by sliding your trigger finger past the trigger guard, a task that can be accomplished with equal ease with either hand. A rail rides the heavy contour 24-inch barrel for your optic of choice; no sights are included. The single shot weighs only 5.8 pounds in 20 gauge, making it a dream to carry on all day drives or still hunts. In fact, it’s so light that some particularly recoil-adverse folks have actually added weight to the stock to tame some of the kick.

When I was attending in college in Central New York in the early oughts, TarHunt slug guns were already something of a legend. Rumors swirled of folks in shotgun counties taking deer at distances that were more typical of a .270 with the innovative bolt action. These tack-drivers delivered mythical long-range performance thanks to decades of tinkering by Randy Fitz, the company’s owner. He took his benchrest experience and turned it to shotguns when a fully rifled 12-gauge barrel became commercially available. By 1994, the RSG, or Rifled Slug Gun, was delivering 1-inch groups at 100 yards. Eventually, Fitz would tackle other gauges, and soon built the 20 by which all others should be judged. The RSG-20 Mountaineer is built using TarHunt’s revolutionary controlled feed bolt action and free-floating E.R. Shaw heavy wall stainless steel barrel, with a Jewell trigger that breaks at a scant 2 ½ pounds. A muzzle brake and a Pachmayr Decelerator recoil pad absorb some of the kick, but at about 7.5 pounds there’s not much. Legendary accuracy comes at a price, and the RSG-20 Mountaineer starts at $3,495.