Q&A: ELR Shooter With No Arms Makes a 3-Mile Shot

Aaron Miesse, AKA Chamberbrake, used his feet to make the 5,280-yard shot on a 1 MOA target 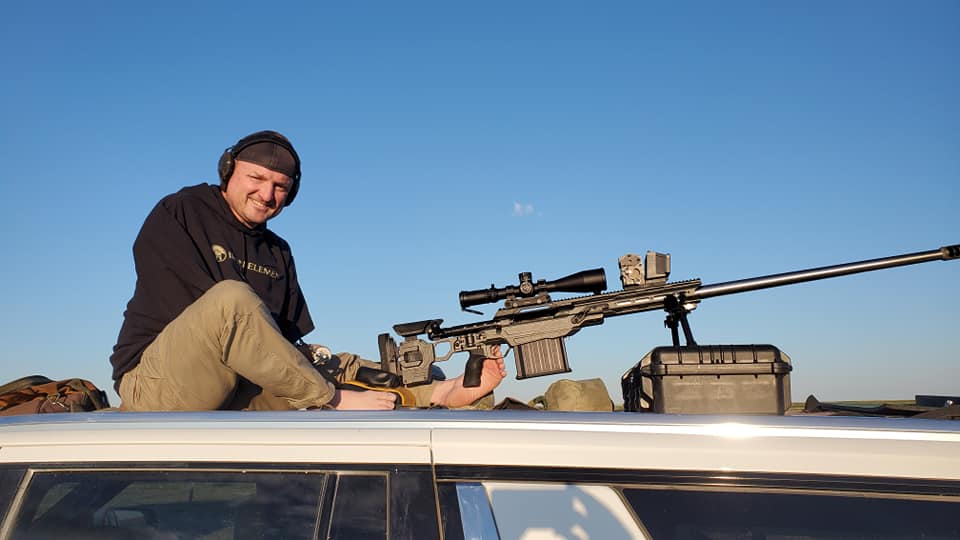 Miesse with the rifle he used to make the shot, a .416 Barret Match built by Vestals Custom Rifles. Aaron Miesse
SHARE

Think of something 3 miles away. Maybe it’s the grocery store, or the gas station—maybe a bridge you cross on your way to work every day. Now imagine trying to shoot a 52-inch steel plate at that distance. The bullet would likely take around 12 seconds to make impact. It would travel 1100 feet in the air. You’d need to know how gravity and wind would affect it in that time and compute mathematical equations to predict these forces. Before you even get there, you’d have to work up the right handloads. And when you take the shot, you’d need perfect trigger control because the slightest movement could send your shot into the next county. Now picture doing all of that with your hands tied behind your back.

That’s what Aaron Miesse, known among shooters as Chamberbrake, did on April 18, 2021. Three miles is a long way to go for any shooter, but Miesse did it without the use of his arms. He lost them when he was 5 years old in a farming accident. Since then, his motto has been “Forward Forever, Backward Never.” From chainsawing logs to long-range shooting , Miesse does it all in his own way mostly with his bare feet. We got a chance to talk with Miesse and learn about how he shoots and what it felt like to make that 3-mile shot.

You just shot a 1 MOA target at 3 miles. Was that your dream shot?

How does that feel?

Even to shoot 1,000 yards, I spent a ton of effort, time, and money to get there—which now seems funny. But once you achieve a big goal and you take a little break, it’s good to just enjoy the moment and the feeling. What’s the next challenge? I haven’t really placed a number on it yet, if there is a number. Maybe I’d just try to be more accurate.

Can you walk us through a shot? What extra steps are you taking that other ELR (Extreme Long Range) shooters may not have to take?

I basically sit down, fold in half, lie down, and shoot. After the shot, I have to sit up and reload. The difference between me and another shooter is, they don’t have to sit up. I spend a lot of time training that motion to build up muscle memory. That way when I sit up and lie down, it’s the same every single time. When I come down on the rifle, my body has to be in the same spot, and my face has to be in the same spot. I can’t apply pressure laterally, which is left and right, or vertically, which is up and down, to the rifle in any way. It has to all be seamless.

One of the things that I train a lot is my core. Any kind of ab workouts or body core workouts help me keep that part of my body strong so I’m able to manage muscle memory a whole lot better. Getting that muscle memory is actually not as hard as it looks. Your body is incredible at adapting. It’s the same for every single one of us. If you never push your body, you never know how easily it can adjust.

So what is it about ELR shooting that appeals to you rather than other types of competitive shooting?

What really appeals to me is getting better at something that is so challenging. I’m either all in or I’m all out in almost everything I do. There’s no halfway for me. There’s no maybe, I might get to it tomorrow.  When I get into something, I tend to devour it. And no matter how much I seem to devour ELR, it always surprises me. It’s just extremely challenging both mentally and physically, more so than other forms of shooting.

Where did the name Chamberbrake come from?

Chamberbrake is a combination of two things that were pivotal for me in finding a lot of accuracy. A number of things have improved my shooting over the years, but what really enlightened me on precision shooting is a well-cut custom chamber and a well-designed muzzle brake on the end of the barrel. That’s why it’s spelled B-R-A-K-E, instead of B-R-E-A-K.

I’ve heard there’s a lot of gear required to shoot ELR. How do you carry it all when you’re at a match?

It’s true. When you shoot in a match, you have to carry your own gun to and from wherever you’re parked or wherever you’re sitting. I always make the joke that we need gun caddies because our guns weigh 25, 30, and even 35 pounds. Even my smaller rifles weigh 17 pounds. And then I’ve got ammo that doesn’t fit traditional ammo boxes, so you got these big boxes, spotting scopes, and tripods. I have a prosthetic arm, and I use it to carry everything.

Are there any special modifications you’ll make to a rifle to make it easier to shoot with your feet?

No. I shoot everything standard off the shelf. Well, with the exception of having my rifles built by a gunsmith. But anybody can do that. The only thing that I add is a hook about midway through the chassis that has nothing to do with shooting. It’s for carrying. It just gives me something else to hold onto with my prosthesis so that I don’t apply too much pressure on the bi-pod. As for shooting, no, I have zero modifications other than custom work that anybody could get.

Do you use your feet for trigger control or is it just something that you’ve developed over the years?

I think I’ve tried everything except for shooting upside down to find accuracy. I’ve tried shooting with the hook on my prosthetic arm, and I wasn’t able to be consistent. I couldn’t repeat the steps in my shot sequence the same way every time. When I sat up to reload, I would have to pull my hook out of the trigger. It added an extra step that was inconsistent. There’s also something to be said for feeling the trigger. I shoot with the index toe on my left foot.

Read Next: Extreme Long-Range Shooting: How to Hit a Target at Two Miles

I saw some videos of you running everything from chainsaws to handguns and farm equipment with your feet. How did you learn to do all that?

After the farming accident, the first thing they did was hand me a pencil and say, “Here, use your mouth to try to color or draw.” If you’ve ever stuck a pencil and eraser in your mouth you know it’s not a real optimal taste, right? So I abandoned that and picked up a crayon with my left foot—I was a lefty with my hands, and I’m still a lefty—and I started to color. That’s the summary of my life. When people see me doing something, they have a paradigm of how it looks correct to them. But because I’m outside of the paradigm, what I do doesn’t necessarily look correct—it even looks like it’s very difficult.

I survived my accident. It made me who I am, and I like who I am. I believe I was put here for a purpose—to do what people say can’t be done so that others realize that they are their own limitations. The only limitation you have is your mind. Overcome the mind, and your body almost always adapts.