Before far-reaching magnums, deer hunters shot whitetails up close—and they used these cartridges to do so 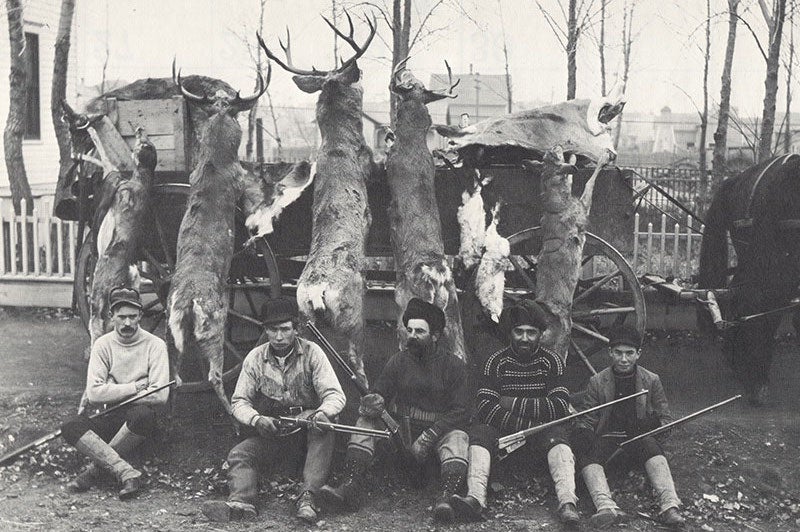 Years ago, hunters bagged a lot of deer with these classic cartridges. North Dakota Game and Fish
SHARE

Modern deer rifles are very powerful firearms. But 100 years ago, the .30-30 Winchester and other cartridges of similar and even less power, were the go-to deer guns. The Jordan buck—the number two whitetail in the world—was killed in 1914 with a .25-20 Winchester, a cartridge no one now, and few if any even then, considered deer-capable.

The fact is deer are not that hard to kill. The main reason for the creation of newer more powerful cartridges was to extend reach. At 50 yards, a deer is no easier to hit or kill with a .300 Magnum than a .30-30 Winchester. But at 300 yards, well, that’s a different story. Here are seven classic deer cartridges that have done and still can do the job if you can find ammo for them. But in today’s world of wonder magnums and 6.5 hysteria, they’re mostly forgotten.

Also known as the .44 WCF, the .44-40 is one of America’s most iconic cartridges. It was originally introduced to accompany the legendary Winchester 1873 lever-action rifle. Old-timers will remember the 1950s movie, Winchester ’73, starring Jimmy Stewart. Millennials and members of Gen-Z have likely never heard of it. Original ballistics gave a 200-grain bullet about 1200 fps. In stronger, more modern rifles, 1600 fps can be reached. One of the truly unique aspects of the .44-40 was that it was also chambered in many early revolvers. This allowed a hunter/cowboy/outdoorsman to fire the same ammo in both. At one time it was the most popular cartridge in the western world, and countless deer have undoubtedly been taken with it. Factory ammo is still available.

Though he was singing about shooting his woman instead of deer hunting, in 1937 the famous blues musician Robert Johnson wrote a song about the .32-20. Initially loaded with black powder, the .32-20 was very popular in early revolvers. Though the cartridge has a reputation for fine accuracy, by modern standards, its original ballistics are very uninspiring. Out of a rifle a 100-grain bullet was lucky to reach 1300 fps. However, in modern rifles like a Marlin 1894 the .32-20 can be amped up to push 100-grain bullets to more than 2000 fps. Still, at 100 yards that’s only a little more than 500 foot-pounds of energy. The best modern comparison would be the .32 H&R Magnum, which will offer ballistics like original .32-20 loads, and the 327 Federal Magnum which will equal the best .32-20 handloads. I’ve never taken deer with a .32-20 but have put several on the meat pole with the .32 H&R and .327.

The .38-55 has two stories. From 1876 until about 1893, when Marlin began offering it in a lever-action rifle, the .38-55 was popular in single-shot rifles for target shooting. It got its name from its .38-caliber (0.377) bullet loaded ahead of 55-grains of black powder. Until about 1940 it was a common chambering in Winchester and Marlin lever guns and was generally loaded with a 255-grain bullet with an at-best velocity of about 1500 fps. It’s greatest claim to fame however is that it served as the parent case for the .30-30 Winchester, .25-35 Winchester, and .32 Winchester Special. In 1978, Winchester, with the introduction of their Big Bore Model 94, sort of gave the cartridge a re-birth with a strengthened and slightly shortened case. They named the new cartridge the .375 Winchester and it was loaded to much higher pressures. Winchester still offers a 255-grain .38-55 load at about 1300 fps. Buffalo Bore has a “Heavy” .38-55 load that’ll push a 155-grain bullet to almost 2000 fps.

Along with the .30-30 Winchester, the .25-35 was one of the first smokeless rifle cartridges and it was available in Winchester, Marlin, and Savage lever-action rifles. The .25-35 was reasonably popular for a time but by the end of World War II there were no American-made rifles chambered for it. It’s a very light recoiling round, and my son used a custom-built Remington Model 788 chambered for the .25-35 to take his first deer. Fortunately, factory ammunition is still offered for the .25-35 WCF, as it is also known. Hornady recently added the .25-35 to their LEVERevolution line of ammunition and it’s loaded with a 110-grain version of Hornady’s very modern FTX bullet. It has an advertised muzzle velocity of 2425 fps.

Everyone has likely heard of the .300 Savage which was the forerunner to the .308 Winchester. The .250 Savage is also well known as the first centerfire cartridge to break the 3000-fps mark. However, both have an older sibling: the .303 Savage. Though ballistically similar to the .30-30 Winchester, the Savage rifles chambered for their .303 allowed the use of pointy spitzer bullets. This gave the .303 a down-range edge over the .30-30. Today, you’ll have better luck finding COVID-19 facts two people agree on than finding factory .303 Savage ammo. Other than a few custom ammo shop offerings, you’ll have to handload for it. When Savage introduced their .300 in 1920, it marked the end of the .303 Savage’s deer killing days.

To this day the .405 Winchester remains one of the most powerful rimmed cartridges ever designed for a lever-action rifle. Introduced in Winchester’s 1895 tube-less lever-gun, much of the fame associated with it can be attributed to Teddy Roosevelt. With a muzzle velocity of about 2230 fps, the .405’s big 300-grain bullet hit hard. Roosevelt once wrote, “The Winchester .405 is, at least for me personally, the medicine gun for lions.” Though likely used on less deer than any of the other cartridges on this list, you can be sure Americans who idolized Roosevelt proudly carried their .405 to deer camp and bragged about it around the campfire. Winchester and Hornady still offer factory ammunition for this dinosaur killer.

This was Remington’s way of competing with Winchester’s .30-30; ballistics are nearly identical. However, the .30 Remington could be loaded with spitzer-style bullets when fired in rifles like the Remington Model 8 semi-automatic and the Model 14 pump with its special magazine tube. This gave the 30 Remington a slight trajectory advantage. Though in its early years the .30 Remington experienced moderate popularity with deer hunters, it and Remington’s Model 8 and Model 14 rifles did not hang around long. If you have a .30 Remington, you have a deer-killing machine, but you’ll have to load your own ammunition. The .30 Remington’s greatest contribution to the shooting world is that its case served as the basis for the 10mm (1983), 6.8 SPC (2002) and .224 Valkyrie (2017) cartridges.