Turkeys behave differently in the fall than they do in the spring. Here’s how to punch your tag—and bring home Thanksgiving dinner 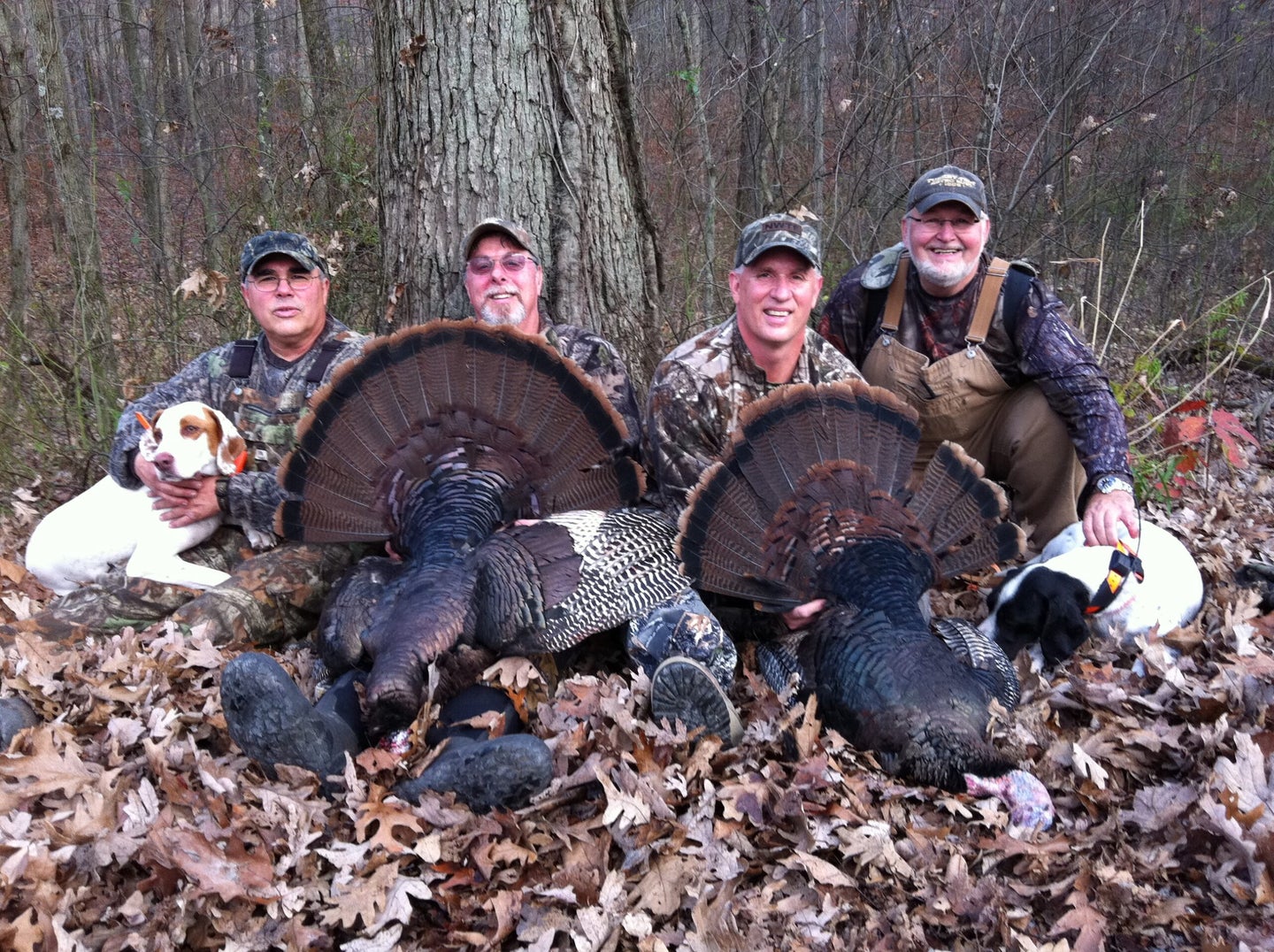 A crew of turkey hunters show of a nice pair of toms. Marlin Watkins
SHARE

Turkeys typically only receive passing mentions when folks discuss their favorite fall pursuits. And with spring being a distant memory and other seasons in full swing, that’s understandable. And unfortunate. Fall turkeys offer a sporting experience unlike any other outdoors adventure. And with more than 40 states offering autumn turkey seasons—some of which open in September and others that run deep into winter—opportunities abound.

But the fall game plays out somewhat differently than the familiar spring ritual. Here’s a quick look at the types of turkeys you’ll likely encounter in the autumn woods and some tips on how to bring one home.

Many hunters kill fall turkeys incidentally while pursuing deer or small game, sometimes encountering flocks at harvested crop fields or mast-rich wooded areas. There’s nothing wrong with that, but true students of the autumn game dig far deeper into turkey behavior and learn to interact with each type of fall bird.

During fall, turkeys are in different modes than in spring, as they’re no longer concerned with breeding. Food and the struggle for survival dominate their existence. They typically fall into several distinct flock types: adult gobblers, hens without poults, and hens with broods of poults. Several subcategories also exist: Male birds in their second autumn—those that were jakes the previous spring—group together. These are sometimes called jake-and-a-halfs. Also, hen-poult groups often combine into larger family flocks, called crèches. The various groups sometimes intermingle, especially at prime feeding areas or large common roost sites. Often, however, you’ll encounter them separately.

As with spring, calling can be critical in autumn for finding turkeys and getting them close. However, turkeys—especially hens and poults—can be much more vocal in fall, and their lexicon expands to include sounds many spring hunters don’t hear much. Roost sites that attract family flocks can sound like a din of turkey chatter at dawn. Young turkeys often utter kee-kees (a series of three to four ascending whistles) and kee-kee runs, which are whistling series followed by a crude yelp or two. The vocalizations might sound slightly different depending on whether it’s uttered by a jake or jenny. Brood hens use long, pleading strings of assembly yelps to gather their offspring after being separated. Gobblers are typically less vocal in fall, communicating via slow, raspy gobbler yelps and popping clucks. Still, it’s not uncommon to hear them gobble at times.

Because the various types of turkeys act and vocalize differently in fall, general hunting approaches can fall flat. For example, the straightforward hen yelps that made a gobbler respond in April will likely be met with indifference from male turkeys in October. To boost your chances, you must know the kind of bird you’re hunting and then fine-tune your strategy.

How to Hunt Scattered Fall Turkeys

Generally, fall hunts fall under two broad categories: 1) Hunters who call in an attempt to make turkeys come to them. 2) Hunters, or specially trained turkey dogs, who scatter groups of turkeys, then set up and try to call the birds back. Knowing the type of turkey you’re after is especially critical during scatter scenarios.

“You need to be the turkey that calls to you,” said Marlin Watkins, a noted Ohio call maker and expert fall turkey hunter. “A young gobbler is not coming to hen sounds. You need to be that bird, whether it’s a jenny hen, young gobbler, or adult hen. And if you produce those sounds, you will be far more successful.”

When his dogs scatter a flock, Watkins immediately tries to determine the group’s composition—hens, gobblers, or a family flock—as that will dictate his calling approach. “If I’ve scattered turkeys, I start with jenny hen kees and kee-kee runs, provided it’s a family flock,” he said. “As soon as first bird answers, I mimic that bird. A young gobbler is not coming to a jenny hen normally, so if a young gobbler kees and gobbler yelps, that’s what I do, even to the point of going note for note. As the bird approaches, I soften the calling, but I do not quit, or they will walk away. They can hear other birds calling that I can’t.”

Depending on the flock type, reassembling turkeys might present a shot opportunity within 20 or 30 minutes. However, adult hens and toms often take longer to get back together, so Watkins uses a different approach after flushing gangs of gobblers or jake-and-a-halfs. “We usually wait 30 minutes or more and start with gobbler yelping and clucking,” he said. “If we get no response in an hour or more, we will mix in gobbling. We start slow, only making a call or two every 10 or more minutes. After no response for that hour or more, we get a little more aggressive.”

That patient yet observant mindset can pay off, as it’s often unclear how birds will react. “I’ve broken gobblers one day and sat three hours, heard one cluck and then shot him,” Watkins said. “The very next day, I’ve broken a different flock, and they started gobbling in an hour and gobbled nonstop until we killed one. You just never know what they will do.”

When hunting alone, or in situations when you can’t scatter turkey flocks, calling strategies become more opportunistic. Brett Ladeau, a Vermont hunter and contest caller, often starts fall quests with a basic tactic. “I typically approach a fall hunt by finding roost sites and try to pattern either a family flock or mixed flock,” he said. “To locate birds, I scout much like I do in spring. I like to be close to birds while they are still on the roost, so finding roost areas is an important tactic I use to find fall birds. I scout for roosting areas and mark them on my mapping app for future hunts. If possible, I also like to watch or hear birds fly to the roost in the evening so I know where they will be in the morning.”

If a roost hunt doesn’t pan out, Ladeau tries to locate turkeys via calling, often taking a mobile approach. “I use my spring technique of riding from spot to spot where I know there are birds, and once I find a few spots that hold birds, I will cold-call at a few well-known turkey haunts,” he said.

And as with hunting scattered groups, Ladeau tries to match his calling to the vocalizations of responsive birds. “If I’m hunting a family group or mixed group, I will use the kee-kee a lot, along with assembly yelps and other calls,” he said. “If I’m hunting a mixed flock or a group of male birds, I will gobble- and jake-yelp to try to entice them into range. My setup is to try to get as close to the birds as possible and then start my calling sequence. If I’m close to a roost, I might not call much, especially if I know their routine, but if not, I call pretty aggressively.”

Get Your Thanksgiving Gobbler

Get to know the flocks of autumn this year, and fine-tune your calling to bring them into shooting range. Ducks and big bucks can wait a bit as you enjoy the sights and sounds of the fall turkey woods.

Turkey Hunting
Fall
How To
Turkeys