Want to Take a Rabbit Super Slam? You’ll Need to Target These 9 Species 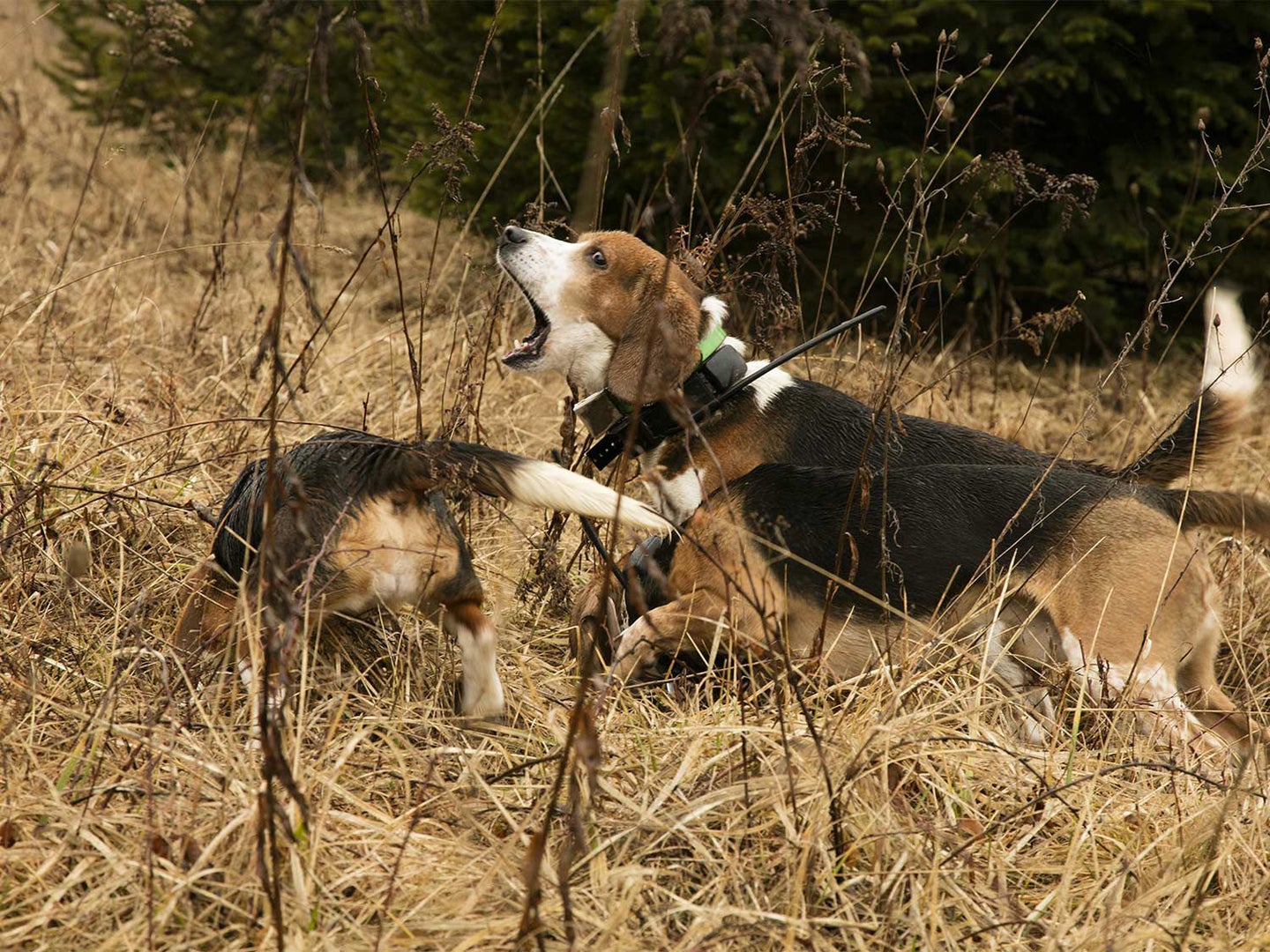 Hunting behind a pack of beagles will up your odds significantly. Nathaniel Welch
SHARE

Bob Ford’s new cookbook Rabbit Stew for Your Soul tells me three things. First, the hunting, writing, field-trialing Pastor created 20 delicious recipes for preparing four species of cottontails, three types of rabbits, and one hare. Second, the book told me that to come up with all of those recipes he must shoot a heck of a lot of bunnies. And third, if you want to prepare each of those meals, you should set your sights on a rabbit super slam.

“My goal was never to shoot a slam,” Ford says. “I just like to run dogs and hunt rabbits. To extend my season and to expose my dogs to different chases and terrain has always been my goal. Much of my hunting is in my home state of Pennsylvania, with regular trips to New York and New England. But every year I pack my truck and go for a drive. Getting a slam happened along the way.”

Ford has harvested seven of the following nine American species listed below. “By the Grace of God, a lot of my parishioners let me hunt their properties,” he says. “When I’m on the road I frequently find places to hunt through church members and their extended families. I’m not opposed to driving long distances, either. My longest drive was to hunt Mountain cottontails in Montana. I went out to attend a writer’s conference but stopped along the way to hunt. If you’re looking for a slam, here is where to look.”

The Eastern and south-central United States.

“Bird hunters are a rabbit hunter’s best friend,” Ford says. “We all like the same terrain. I look for Eastern cottontails in the young forests that grouse and woodcock prefer. Cuts from 15 to 30 years ago provide primary and secondary growth, and there usually are open fields with nearby pines. The combination of young and old forests and fields makes for a great chase, with Eastern cottontails circling up to 300 yards. I’ll usually see grouse, woodcock, and stocked pheasant while rabbit hunting, so that makes for an even better, mixed-bag hunt. Beagles are great flushing dogs for upland birds, with the exception being my dog Duke. When he was younger, my dog Duke pointed birds, most of the time with one paw lifted up. His tail set was straight, but he was every bit as stylish as my buddy’s setters.”

“Pennsylvania and West Virginia have good numbers of Appalachian cottontails,” says Ford. “The old timers call them woods rabbits. They’re a bit smaller than an Eastern, but they run bigger, usually circling at 400 to 500 yards. Sometimes the dogs are so far out that I can’t hear them baying. Tracking collars are a must, and I use a SportDOG Tek 2 to keep up with them. The woods rabbits like the same kind of primary and secondary growth as Eastern cottontails.”

“The New England cottontail is a subspecies of the Eastern Cottontail,” says Ford. “I’ll head to coastal areas to hunt them. They like the brambles and thickets of the Pine Barrens which are a mix of warm-weather grasses, white, black, and scrub oaks, and bittersweet and sweetbriars. My friend Jason Wiseman and I hunted them along the Bay Side Cape Cod, and then packed our guns and dogs to jump on the Nantucket Ferry. It was a riot seeing folks wearing navy blazers, Nantucket red trousers, and penny loafers on the same seating areas as our dog boxes and gun cases. Once on the island we stayed with Viagra Dan, the island’s pharmacist. Not a lot of folks hunt out there so there were a lot of bunnies.”

“The Mountain cottontail is found only in the Rockies,” says Ford. “It’s big country, with lots of prairies, mountain ranges, and rivers. When scouting places to hunt it’s best to work off the rule of thumb that 80 percent of the rabbits are found in 20 percent of the cover. Look at the rabbits’ natural coloration and then search for grasses that match their color. Low prairie grasses provide succulent growth, and by matching the color of the food and cover with the rabbit you’ll find them pretty easily. Mountain cottontails like safe, protected areas so they can eat in peace.”

Northern parts of the United States

“Unlike cottontails that get water from their food, Varying hare, also known as snowshoe rabbits, need to drink water directly,” Ford says. “As a result, I find them in cedar swamps rimmed with hemlock and other coniferous species. I also find them along rivers, streams, seeps, and ponds. Look for areas that have been aggressively logged several years prior, especially if the harvested trees are conifers. The young boughs provide protection from avian predators and the low growth offers grasses and clover to eat. Varying hare are big runners, usually in the 500 to 700-yard range so pack your tracking collars.”

The South-central United States and along the Gulf Coast

“Sweet Home Alabama is a great state to look for Swamp rabbits,” says Ford. “So is Mississippi and Louisiana. Swamp rabbits run big like a hare, and because they’re known to swim they make a hound’s chase very difficult. I remember shooting one swimming up a creek with only its nose sticking out. Until it climbed up the bank I thought it was a beaver.”

Coastal regions of the Eastern and Southern United States

“Marsh rabbits are known to swim, too, mostly to avoid predators,” Ford says. “They’re small and run that way, usually around 200 yards or so. If you’re in areas with small marshes they’re a lot of fun to hunt. I remember finding a lot in Southern Virginia near the North Carolina border. I’d have stayed longer but I had to get back for church.”

“The Whitetail jackrabbit is one that has eluded me,” Ford says. “I found some in North Dakota, and saw it on the jump. The only thing is, unlike the other rabbits I’ve killed, the Whitetail jack never circled. I’ve heard that some houndsmen hunt on horseback as they need to cover ground. Their dogs are different, too, and they favor longer-legged sight hounds instead of the standard scent hounds. Those dogs run much bigger.”

“I’ve never chased a Desert Cottontail,” Ford says. “They live in the dry, near-desert grasslands in the Southwest and even up to eastern Montana. On windy days they never come out of their holes because the wind makes it tough for them to hear approaching predators. On hot days they loaf around midday, digging depressions with their front paws to get cooler soil to lower their temps.”

“Any shotgun will do, but I like side-by-sides” says Ford. “Because they balance well with the weight in the forend, they’re the ultimate game gun. My gauges range from 16 to .410. Straight stocks keep weight down which is a good thing because I’m carrying them all day. Less metal work also lightens the load and they’re highly responsive.

“Chokes in my larger gauges are Modified and Improved Modified,” he says. “I like light tighter chokes in my smaller gauges, so when I drop down to a 28 gauge or a .410 bore I tighten up to Modified and Full. Most of my shot sizes are 6, but when I shoot the 28 gauge or the .410 I like Nos. 4 and 5. I load the larger 4 shot in the right barrel and the smaller 5 shot in the left barrel. That way I get more impact on the first shot and better spread on the second shot.

Read Next: How to Skin Rabbits and Squirrels

“Regular brush gear is important for hunting in the primary and secondary growth,” says Ford. “Chaps or bibs, gloves, a strap vest, is really all I use. The important part is collars for my dogs. When they’re pounding and chasing out of the range of sound, GPS tracking collars help me know where they are. That’s helpful when they circle so I can position myself in an open area to get a kill shot. Boots are important. If you’re hunting cottontails, then regular upland boots are fine. Rubber boots are better if you’re running swamps or in wet areas.”