How to Run a Lever Gun—the Right Way

You already know how to make your lever-action go bang, but these tips can help you run it better, faster, and more safely. 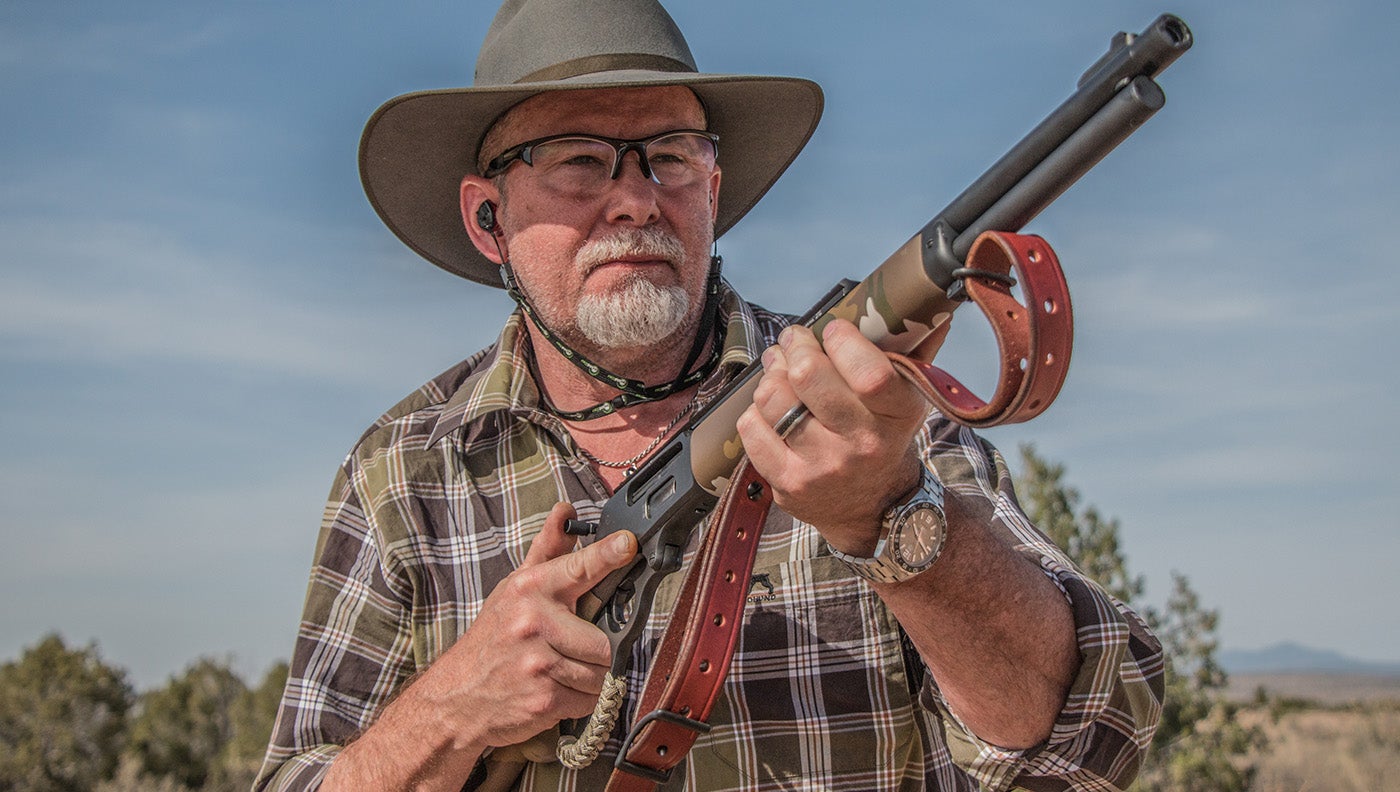 The author on the range with one of his favorite lever guns. Richard Mann
SHARE

The right way to operate and shoot a lever-action rifle might seem pretty straight forward. But, as is the case with any firearm, there are some tips and tricks that can help you be safer, faster, more reliable, and maybe even more accurate with your lever gun. Just because we all have a little cowboy in us, does not mean we all come into this world knowing how to run a lever gun. Here’s what you need to know, from loading to shouldering to shooting and more.

How to Properly Load a Lever Gun

Some lever guns have detachable magazines, some are loaded through a port in the magazine tube, but most traditional lever guns are loaded through a gate on the receiver. The best way I’ve found to load a traditional lever gun is to insert the first cartridge only about three-quarters of the way into the gate. It should stay in place there while you take the next cartridge and then push it the rest of the way in, stopping again at about three-quarters of the way. Repeat this until the magazine tube is full. If the partially loaded cartridge wants to creep out, you can hold it in place with the little finger of your support hand while retrieving the next cartridge to load. This method keeps you from having to depress the loading gate with every cartridge.

How to Handle a Lever-Action Safety

Any time you chamber a cartridge in a lever gun the hammer is cocked. If you’re going to carry/hunt with a loaded lever gun, you’ll first need to lower the hammer. Point the gun in a safe direction – toward the ground – and firmly place your thumb on the hammer. Holding pressure with your thumb, press the trigger, then as you begin easing the hammer forward, release the trigger and lower the hammer to half-cock. Some modern lever guns have a cross-bolt safety. It can be engaged as opposed to, or for added safety, in conjunction with lowering the hammer.

The Best Way to Unload a Lever Gun

Though it might seem unsafe, the best way to unload a lever gun is to cycle the cartridges through the action. Just point the gun in a safe direction towards the ground, and while keeping your finger off the trigger, cycle the action. To be sure your finger does not find the trigger you can grip the lever loop with all four fingers. If the rifle is equipped with a cross bolt safety, this is the time to use it. With the safety engaged, even if you inadvertently press the trigger, the rifle will not fire.

How to Shoulder a Lever-Action Efficiently

Lever guns are fast handling, svelte, rifles. To take advantage of their handling qualities you need to mount the rifle properly. Don’t place the gun’s butt to your shoulder and then try to raise the muzzle to the target. Mounting the rifle is this manner makes it more difficult to quickly align the sights on target. A more efficient and faster way is to snap the rifle up level with your eye. Then while keeping both eyes open and on the target, pull the stock into your shoulder as your eye directs the sights to the target. If there’s not already a cartridge in the rifle’s chamber, run the lever as you raise the rifle. If a round is in the chamber, cock the hammer and/or deactivate the cross-bolt safety, as you raise the rifle.

How to Shoot and Shoot Again

Shooting a lever action is no different than shooting any other rifle. However, after shooting the lever gun you’ll need to stroke the action. Do this immediately after following through on your shot, but while keeping the stock firmly against your shoulder and your trigger finger out of the trigger guard. Also, do not wrap the thumb of your shooting hand around the stock; keep it straight. And remember, if after cycling the lever you discover you do not need to shoot anymore, immediately lower the hammer, engage the cross-bolt safety, or both.

How to Deal with a Lever-Gun Jam

Lever guns can jam. Most often because the lever was not cycled with authority or because the gun was dirty. Sometimes you can clear these stoppages by jiggling the lever, shaking the rifle, and holding your mouth just right. In other instances, you may have to remove the lever and even the bolt to get it sorted. This makes knowing how to field strip your lever gun important. The best way to avoid stoppages is to perform frequent maintenance, only use factory or proven ammunition, and when you run that lever, run it like you mean it.

How to Keep Your Lever-Action Running Smoothly

Proper maintenance will keep lever guns running; they’re machines that need to be clean and lubricated. But don’t use too much lubrication; it will attract dust and gum up internals. For best results, take your lever gun apart and thoroughly clean the action, lightly applying oil, making sure to coat any surface showing wear, because wear indicates metal to metal contact.