The best way to sight in your hunting rifle depends on how far you plan to shoot. Here's how to do it right for short, medium, and long shots 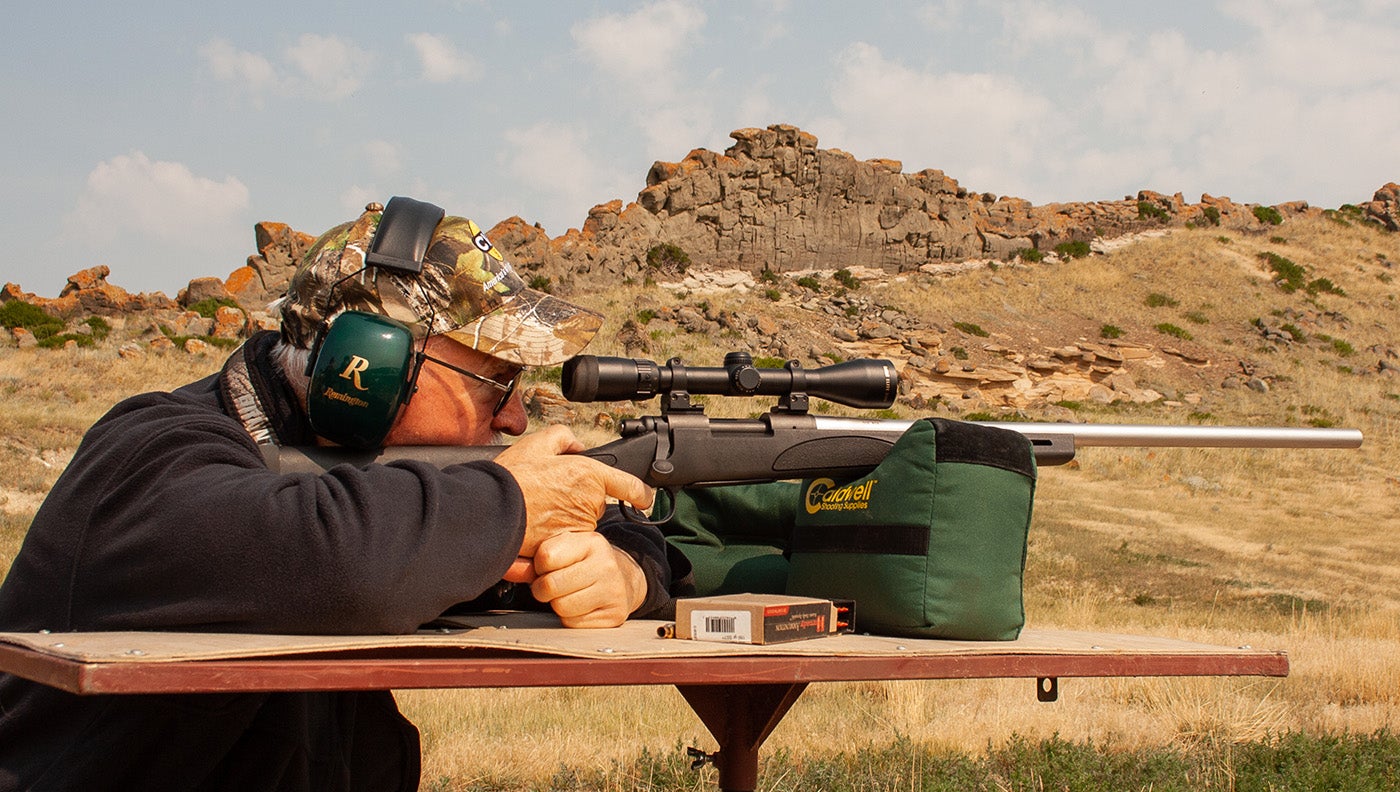 Establishing the correct zero for the conditions you will hunt in is critical to success. Richard Mann
SHARE

Zeroing a rifle means adjusting the sights so your point of aim corresponds with your point of impact at a specific distance. The process is pretty simple but requires some forethought. At what distance do you want your point of aim and point of impact to intersect? It’s common to zero a hunting rifle at 100 yards, but depending on your gun and where you hunt, it might not be the best answer. Here are three sighting-in options based on anticipated shot distances. The idea here is to pick the one that best fits your needs with a specific hunting rifle. So, your precision bolt rifle should probably have a different zero than your big-woods lever gun. Once you decide the best zero for a given gun, you can go ahead and sight it in. But you’re not done. Make sure to confirm everything on the range out as far as you intend to shoot before you go hunting.

Some deer hunters will never need to shoot more than 100 yards. Most of my deer hunting is done in West Virginia, and I’ve taken eight buck here worthy of my wall. The average shot distance for those trophies was only 83 yards. The farthest shot was a 180-yard anomaly across a clear cut a year after we’d timbered a large section of our hunting property. Take that shot out of the equation, and the average is just 62 yards.

If you expect to shoot at short range, you should zero at short range. Just don’t make the mistake of zeroing too close. A 25-yard zero will put a .30/06 bullet about 3 inches high at 100 yards. A zero of between 75 and 100 yards works best for most big-game cartridges. With an 80- to 85-yard zero, common woods cartridges like the .45/70 or .35 Remington will strike within a half-inch of your point of aim from around 25 out to about 100 yards. With an 80- to 100-yard zero, higher-performance cartridges like the .30/06 will do the same from 35 to about 130 yards. This makes it easier to thread your bullets over and under intervening brush.

If you hunt in mixed country where a combination of timber and open pastures are common, a medium-range zero is better. I tabulated the shot distances for every trophy hanging in my home—22 animals taken on several continents—and the average was 171 yards. Five of those shots were right at 300 yards, and five were less than 80. With a short-range zero, a .30/06 bullet will hit about a foot low at 300 yards, so we need another option.

In this situation, a maximum-point-blank zero is the answer. With most modern big-game cartridges, it will allow you to hold dead on out to almost 300 yards, and your bullet will strike inside a 6-inch circle out to that distance. This is a cartridge specific zero; it’s dependent on muzzle velocity and the ballistic coefficient of the bullet. Use a ballistics program to determine how far your bullet will travel in one-third (0.33) of a second and simply zero your rifle to strike 3 inches low at that range. Then, just hold dead-on out to that distance.

This works because gravity is a constant; all bullets drop the same amount over the same length of time. The difference is how far they travel during that time. With flat shooting loads from a .30/06, .270, .308, or 6.5 Creedmoor, you’ll be good to go out to around 280 yards or maybe a bit farther. So, out to 300 yards or so you can hold just a little bit high but still on the animal. With shorter-range cartridges like the .30/30 Winchester, you can hold dead on and still hit a 6-inch circle out to around 200 yards, with about 230 yards being the maximum practical range.

Long-Range Zero (300 yards and beyond)

Once the shot distance extends much past 300 yards, things change. A 300-yard zero with a .30/06 will put the bullet about 5 inches high at 100 yards. You can hold low to compensate, but close-range shots often need to be taken quickly and you might forget. Also, at 400 yards, your bullet will strike about a foot below your point of aim. This means you’re only staying within that 6-inch circle between about 260 and 330 yards. That’s a narrow 70-yard window. If you shoot outside it, you’ll be guessing where to hold.

If you expect to shoot beyond 300 yards, you’ll need either wheeled artillery or some assistance from your riflescope. I once took a Scout Rifle on a New Mexico elk hunt and my chance at a big bull came at 326 yards. Using a Burris 2-7X scout scope with its ballistic reticle, I held the 300-yard aiming point about 6 inches above the killing spot. About 4/10ths of a second after I pulled the trigger, the bullet punched through the elk’s heart.

With ballistic reticles that help you apply the correct hold over, or with target turrets that let you dial-in the proper trajectory correction, the common 100-yard zero is a good answer. It will work for short-range shots, and you can use the additional aiming points or target turrets for the long-range shots. There’s also a trick for mid-range shots should you need to take one in a hurry. With a ballistic reticle and cartridges in the .30/06 and .308 class, the 200-yard aiming point will hit inside a 6-inch circle out to about 250 yards. If you’re using a target turret, leave it set at 200 yards for the same result. If you must shoot farther, use a different aiming point or dial in the exact correction as needed.