Rifle Review: Under Ruger’s Ownership, the Great Marlin 1895 SBL Is Better Than Ever

Been chomping at the bit to see how a Ruger-made Marlin will handle and shoot? You won't be disappointed. The author's test gun averaged sub-MOA groups. Seriously 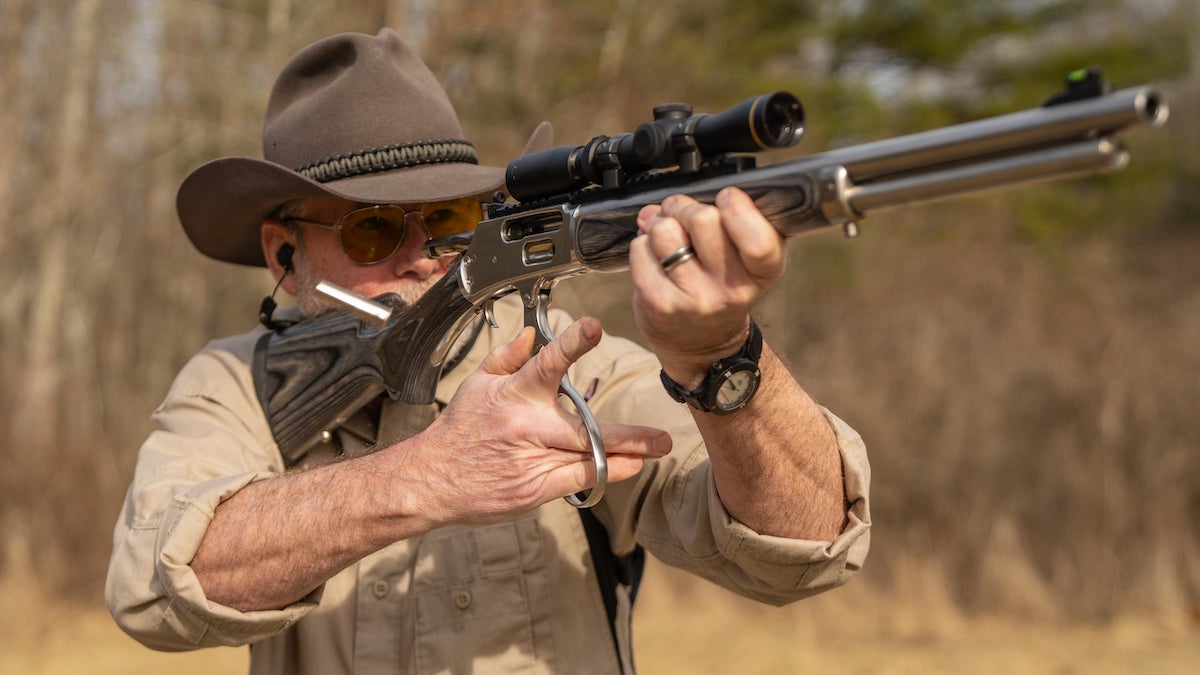 Ruger purchased Marlin in late 2020. Since then, lever-action-loving hunters have held their breath waiting to see what Ruger would do with the company, and what would be the first new Marlin introduced. First, Ruger moved Marlin manufacturing to Mayodan, North Carolina. Then they changed the blue Marlin Man logo to Ruger red. And finally, after about a year, they announced that the 1895 SBL in .45/70 would be the first of the third iteration of American-made Marlins.

The History of the Marlin 1895

The original Marlin 1985 was manufactured until 1917. By then, with the introduction of more modern cartridges like the .30/06, the appeal of the .45/70 cartridge had waned. Production on the new model 1895 began in 1972. It was built on Marlin’s stout 336 action. Because that action could handle more powerful loads, the 1972 1895 Marlin was largely responsible for the resurrection of the .45/70.

Remington purchased Marlin in 2007. They didn’t run Marlin very well, but in 2009 they did introduce the model 1895 SBL in .45/70. It was a better thought-out version of Marlin’s popular Guide Gun. It didn’t have the silly integral muzzle brake, but it did have a full-length XS Sights’ Lever Rail and a large loop lever. I purchased the first 1895 SBLs I found and have used them to take everything from bear in Alberta to buffalo in Africa.

The 2021 Ruger/Marlin 1895 SBL is very true to the 2007 design, but there are some changes of note. The barrel is a half-inch longer and the muzzle is threaded and capped. This allows for the installation of a muzzle break or suppressor. Some might appreciate a break with max-power .45/70 loads delivering more than 50 foot-pounds of recoil, but to me, putting a suppressor on a fast-handling lever gun seems a lot like putting a saddle on a cat.

Instead of the white striped XS Sights front sight post, this rifle has a front sight with an integrated Tritium and fiber optic vial. This may not offer the same level of extended range precision, but it does seem ideal if you’re battling a pissed-off grizzly nosing around your tent at night. Marlin has also replaced the XS Sights’ Lever Rail with a proprietary version that retains the fully adjustable ghost ring sight. This 23-slot rail allows for the attachment of a scout scope, a prismatic sight, a miniature reflex sight, or even a traditional riflescope.

The bolt on the new SBL is radially fluted and nickel-plated, and all the stainless-steel metal surfaces on the rifle have been polished a bit more than on originals. Though Ruger made some manufacturing changes, such as heat treating before machining and crafting some parts by the wire EDM process, from a functional standpoint the new SBL is nearly identical to the old. The action is noticeably smoother, though, and the edges on the large loop lever are radiused. On original SBLs these were sharp enough to peel skin. With my early SBL, the trigger is smooth and breaks crisply at 2.75 pounds. On the new SBL, the trigger is just as crisp but requires about twice the pull force.

Like with most factory lever guns the new SBL has a length of pull that’s about an inch too long for most shooters. But the forearm has been thinned down and the checkering on the wrist and forearm is much refined. There’s also a laser-etched Marlin Man logo on the grip cap and there’s a soft, 1-inch thick, recoil pad fitted to the butt.

The only operational difference between older 1895s and the new Ruger-made version concerns loading and unloading. With pre-Ruger 1895s, after the first round is loaded in the magazine tube you depress the loading gate with the bullet nose of the next cartridge and push it in. With this new rifle you must use the nose of the bullet to push the rim of the case already loaded out from under the loading gate before depressing it. Similarly, when unloading, you use the nose of a bullet to push the rim of the last round in the tube from under the loading gate, depress the loading gate, and then let the loaded rounds slide out.

Though this might seem like a flaw in design, I think it’s a better mousetrap. Sometimes when loading or unloading earlier 1895s, you would depress the loading gate and the rounds in the magazine tube would try to squirt out. With the new 1895 you must push on the rim of the last round prior to depressing the loading gate so this is averted.

I was reluctant to report how well this rifle shot for fear of being thought a charlatan. I tested four loads from a sandbag rest at 100 yards using Leupold’s intermediate eye relief (IER) VX-2, 1.5-4×28 riflescope. The average for 12 3-shot groups—three, 3-shot groups with each load—was a stunningly small 1.125 inches. And two of the loads averaged less than an inch. Just let that sink in; this is a sub-MOA, big bore, lever-action rifle.

But lever guns were not made for the bench. Their forte is dagger-like agility and fast-to-shoulder shooting like you need if you’ve jumped a whitetail in a clear cut. I worked at whacking steel plates from 50 to 100 yards, with single and multiple shots. First-round hits were easy and follow-up shots came quickly. I also removed the scope and spent some time snap shooting at close range after dusk to simulate a charging bear or buffalo. Starting with the rifle’s butt on my hip—eyes, muzzle, target—I could consistently punch a five-inch circle at 25 yards in less than 1.5 seconds. The bold, easy-to-see Tritium front sight, was an asset during these drills.

In the time of the original 1895, .45/70 loads were weak, much like Remington’s current 405-grain load. With its reintroduction in 1972 more powerful .45/70 loads, with ballistics similar to Federal’s 300-grain HammerDown load, emerged. Soon we also had magnum or heavy .45/70 loads, from companies like Buffalo Bore, that could generate a ton and a half of muzzle energy. The ability to function and fire such a wide power range of ammunition is what made the 1895 .45/70 popular in the modern world.

Remington’s chronograph must have been broken when they created their 405-grain load; it has never reached its advertised velocity of 1330 fps in any .45/70. But it is adequate for deer-sized game. Tier-two loads, like Federal HammerDown and Hornady LEVERevolution, are sufficient for all non-dangerous game. And, if beasts capable of eating or stomping you are what you’re after, heavy .45/70 loads will handle them. The Ruger-Marlin 1895 SBL functions perfectly with these and shoots them all with incredible precision.

Read Next: Why The Marlin Model 1895 Will Never Die

The 1895 Remains One of the Best Rifles of All Time

Any discussion about what the best 10 rifles ever made might be, must include the Marlin 1895. I also believe that the SBL is the best version of that rifle. It’s compact, fast-handling, and powerful, and it’s compatible with most any sighting system. It can also be used to hunt any animal walking Earth. We’ve all been wondering what Ruger would do with Marlin and it looks like they may have created the finest 1895 ever. If it’s an indication of things to come, that little bit of cowboy in all of us is going to be very happy.