Is The MC2sc Mossberg’s Best Pistol Yet? 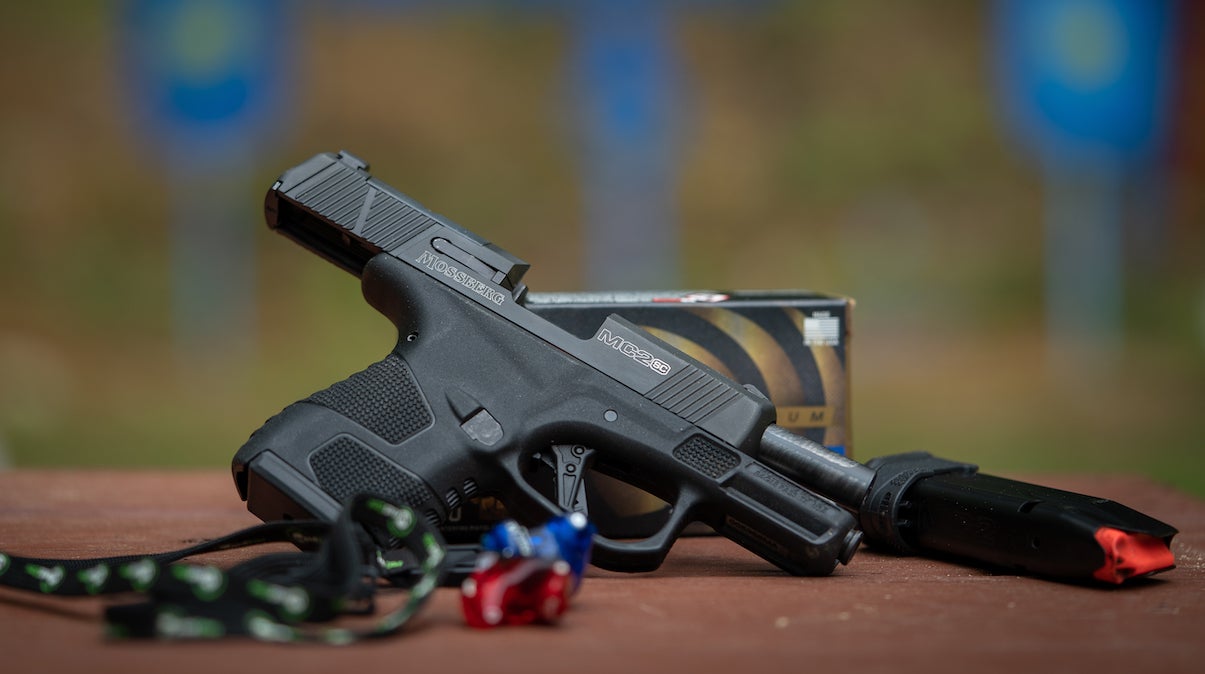 During our test, the MC2sc’s closest competitor was the Taurus GX4, but it only beat the Mossberg by less than half a point. The Taurus picked up its scoring advantage due a lower price of $468.18, compared to $556 for the Mossberg. However, in every other category, the Mossberg tied or performed slightly better than the Taurus. Overall, the MC2sc ranked fifth out of the 13 handguns we tested.

There’s a good reason for this. For starters, the MC2sc is easy and safe to takedown just like the original MC1sc. After unloading, you lock the slide to the rear and depress a button in the center of the slide plate at the rear of the slide. After that, you slide the plate down and out of the slide, allowing you to remove the striker assembly. All you need to do then is release the slide lock and remove the slide from the frame. Unlike with many striker-fired pistols, there’s no need to pull the MC2sc’s trigger prior to disassembly.

But like many modern pistols, the MC2sc comes optics-ready. The factory sights are also high enough, and the optics cut out low enough, that you can still use the factory sights after you install an optic. We only shot the MC2sc with factory sights, but before our test, I tested several MC2sc pistols with a Crimson Trace CTS-1550 reflex sight.

The MC2sc ships with two magazines. Both are double-stacked—one a flush-fitting 11-round magazine, and the other an extended, 14-round magazine. With the extended magazine, which lengthens the grip, the pistol was noticeably easier to control, but of course, the extended grip makes the pistol a bit more difficult to conceal. There’s a polymer sleeve on the exposed portion of the extended magazine that smoothly maintains the shape of the grip. While shooting you can’t feel this sleeve; it just feels like a longer grip.

The sights on the MC2sc we tested were of the three-dot variety, with two bright white dots at the rear and a single white dot at the front. For an additional $106 a version of the MC2sc is available with a set of TRUGLO Tritium Pro Sights. There’s also an MC2sc version that comes with a manual cross-bolt safety, which is a bit odd. It’s not a safety that’s conducive to fast deactivation, but it could work well for those storing the gun for home defense or maybe carrying the gun off-body in a purse or fanny pack. A 10-round-only version of the MC2sc is available as well.

We had one complaint with the MC2sc. The trigger had just enough gap between its tip and the trigger guard to sometimes pinch your trigger finger during trigger reset. This was only experienced by about half the shooters and seemed to occur less when the higher-capacity magazine was used. Possibly, the higher-cap magazine alters the grip just enough to somewhat circumvent this irritation. Interestingly, in another event at Gunsite Academy, when this MC2sc was debuted to another bunch of writers—including me—about half of those present experienced noticeable finger pinching.

Immediately following that Gunsite event, my teenage daughters and wife used three MC2sc pistols for a one-day tutorial at the Academy. They performed well with the pistols which were all outfitted with reflex sights. Towards the end of the day, and after about 250 rounds each, the youngsters did experience some stoppages. Most likely they were due to shooter fatigue; micro-compact pistols must be held firmly to function properly. However, none of the ladies experienced the finger-pinching issue. So, finger size could also play a factor.

Read Next: Why the Wilson Combat SFX9 is the Best Centerfire Handgun of 2022

With or without a reflex sight, the Mossberg MC2sc is a strong performer in the micro-compact 9mm field. It proved reliable and is compact and lightweight enough for consideration as an everyday-carry gun. With the MC2sc, Mossberg has clearly created their best pistol to date. My wife still carries her MC1sc, but my son and oldest daughter are very happy with their MC2sc pistols. My daughter likes it with the reflex sight and my son prefers it without. We replaced the factory sights on his with XS Sights’ RD3 sights and it has become his warm-weather carry gun.