Tackdrivers: 12 of the Most Accurate Hunting Rifles Ever Made

From early tackdriving muzzleloaders to today's long-range game getters, these rifles have earned their reputations for hitting where hunters aim 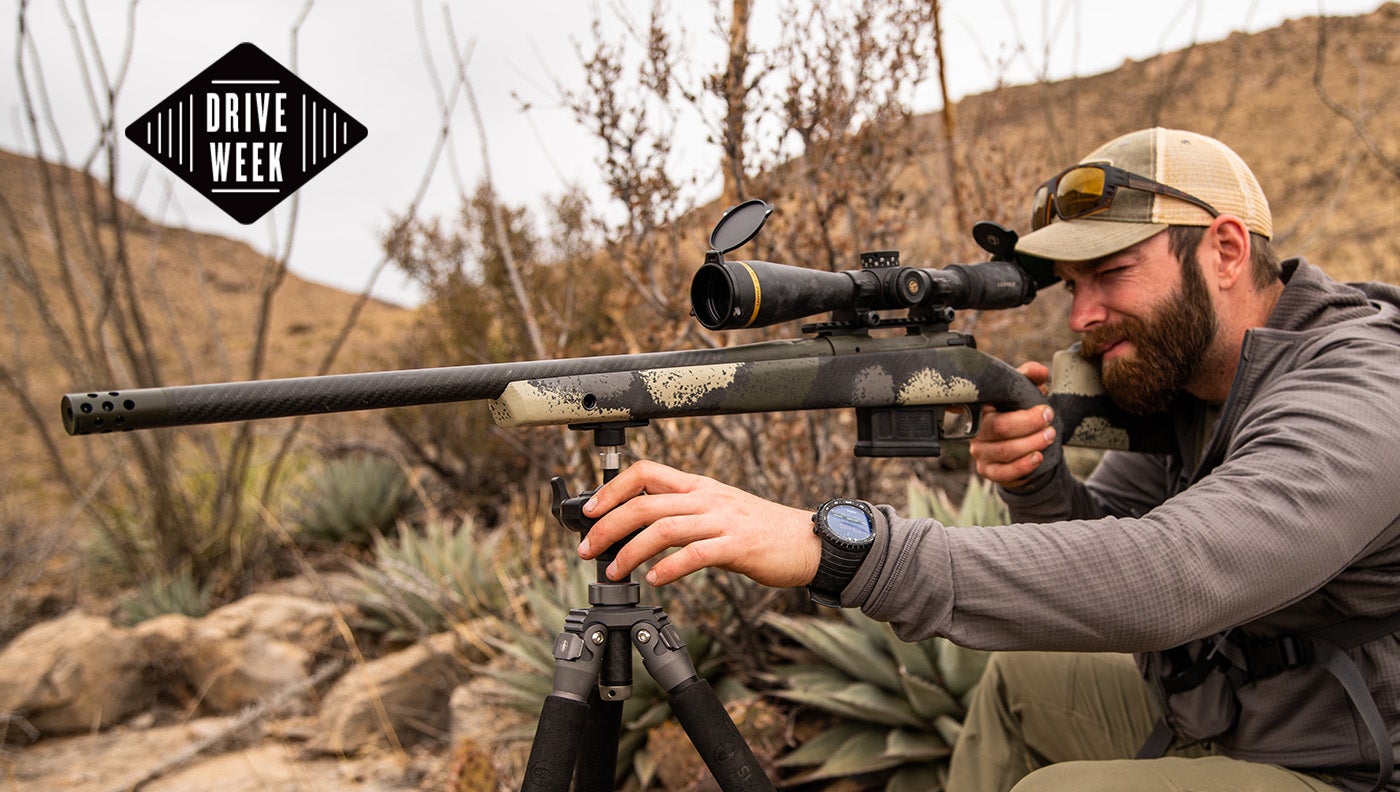 Welcome to Drive Week. To celebrate the launch of our brand-new Drive Issue, all week long we’ll be publishing stories about road trips, hard (and rewarding) hunts, classic truck guns, and more. So, buckle up and enjoy.

Hunters have always searched for a more accurate rifle. This is partly for the obvious reason that a real tackdriver makes precise, ethical shots easier. But it’s also because the better a rifle shoots, the more confidence it instills, and shooting well at game is in no small part a matter of confidence. And so, over the many the decades, we’ve only gotten more sure of ourselves as hunters and more precise as marksmen as increasingly accurate rifles have come along—to the point where it’s getting hard to imagine much more the way of future improvement, though it’s sure to come.

History, and especially recent history, isn’t short on examples of accurate rifles. But what we’re looking at here, specifically, are models commonly used by hunters that changed the game in terms of putting bullet after bullet into the same spot, time and again, when it counted. Here are a dozen hunting rifles, over the last 170 years or so, that have become deservedly iconic for their accuracy. With one of these in hand, you knew that if you missed, it was your fault and not the rifle’s.

American-made muzzleloaders set a new standard for accuracy, and some of the finest were crafted by a German immigrant named Joseph Carper in Virginia, beginning in the 1830s. These guns were notorious for their precision. They were so valued and admired, one of Carper’s rifles was traded for all the land that could be seen from a mountain top along what is now the New River Gorge National Park. These hand-built rifles, adorned in brass, silver, and copper, were so deadly they were banned from pioneer shooting competitions. And due to the reputation of these tackdrivers, the Union Army raided the Carper homestead during the Civil War and burned the gun shop to the ground. Carper’s son continued to build muzzleloaders until as late as 1915. Most Carper rifles were .40-claiber or smaller. The one shown is a .32. It has an unusually fast rifling twist with a very slight gain, having one turn in 48 inches. The front sight blade was made from a silver dime.

Made during the latter part of the 19th century, these falling-block rifles were regarded as the most accurate rifles money could buy. They were a favorite of buffalo hunters on the western plains and typically fired large-caliber, centerfire cartridges loaded with a paper-patched lead bullet. Legend has it that while held up under siege with Bat Masterson and several other buffalo hunters in Adobe Walls, TX, Billy Dixon toppled a Cheyenne warrior from his horse at an incredible 1,538 yards with his .50/90 Sharps. Even if the distance was doubly exaggerated, it was an incredible shot for a rifle in 1874. In 1990 another Sharps starred with Tom Selleck in the movie Quigley Down Under, which went a long way toward crystalizing the rifle’s reputation among modern audiences as one of the most accurate of all time.

World War I marked America’s transition from the lever-gun to the bolt-action. A country full of veterans who’d trusted a bolt-action to keep them safe led Winchester to develop the Model 52. For many years it was the principal small-bore match rifle in the world, but it was conceived as a training rifle for the military and came to be known as the King of 22s. In its target configuration, with a 28-inch barrel and peep sights, it was legendary for dominating shooting matches. In its sporting configuration, with a 24-inch barrel, it was a small-game wonder. Part of the reason these rifles shot so well was due to the extensive hand fitting and tuning that went into their manufacture.

Manufacturing advancements achieved during World War II allowed Remington to replace their Model 30 bolt-action rifle with the better and easier-to-produce Models 721/722. Though probably most famous for being the precursor to Remington’s famous Model 700, the 721 and 722 were regarded as fine shooting guns, and are generally considered the first modern, economically produced sporting rifles. There were two versions: The Model 721 was for long-action cartridges like the .270 Winchester and the 722 was for short-action cartridges like the .222 Remington. Hang around old-timers at a gun shop very long and you’ll hear wondrous tales of unbelievable shots on groundhogs and rock chucks that were made with a Remington 721 in .222 Remington.

In the latter part of the 1900s, hunters were transitioning from prowling wooded ridgelines to sitting in stands along crop fields. Traditional deer rifles were not well suited to reaching out over long distances with enough precision to make ethical shots. South Carolina farmer and competitive shooter Kenny Jarret changed that with the introduction of a custom rifle that transformed the game and even led to a new genre of factory rifles. Jarett’s rifle became known as the “Beanfield Rifle,” and it delivered extreme precision at ranges previously thought impossible with hunting-weight bolt-action rifles. The hunting firearms industry has been trying to emulate Jarett’s creation ever since.

Until Melvin Forbes of New Ultra Light Arms (NULA) created the world’s strongest synthetic rifle stock, designed to reduce recoil and enhance accuracy, conventional wisdom was that lightweight rifles were not accurate. With his Model 20, which featured a proprietary action and a Kevlar/carbon-fiber rifle stock that was stiffer than the rifle’s barrel, Forbes introduced a sub-5-pound bolt-action hunting rifle that could shoot the cents off a nickel at 200 yards. The rifles carried so easily and shot so well that more than 70 percent of people who purchased one, purchased another one within a year. Given their price of $2,000 at the time (a new NULA rifles cost $3500) that speaks lounder than anything as to how well these rifles shoot.

Remington’s entire line of Model 700 rifles has a storied history of excellent accuracy, but the ultimate expression of what the 700 was capable of was the Sendero model. As the first factory-built, true long-range hunting rifle, the Sendero was inspired by the rifles of Kenny Jarrett. It had a heavy barrel, and its synthetic stock blurred the lines between a hunting and a target stock. And, at only $650, the Sendero was very affordable. At almost 9 pounds, it was also heavy, but hunters did not care because with the Sendero they could shoot like never before. Since its introduction, the Sendero has spawned a spate of similarly styled rifles from many manufactures and custom builders, and it’s still with us for only about twice what it cost 27 years ago.

It’s almost hard to believe today, but around the turn of the last century, it was no slim pickings to find a hunting rifle that would consistently land all its shots within an inch at 100 yards. In 2004, a friend of mine purchased a CZ-USA Model 550 chambered for the 6.5X55 and brought it over to test. I watched him fire 10 shots from a bench at 100 yards and the group measured less than an inch. Amazed, I began testing CZ 550s and have never found one incapable of shooting a sub-MOA, five-shot group. Discontinued in 2017 and replaced by the Model 557, the 550s and the newer 557s might be the most accurate and affordable, factory-stocked, traditionally styled, bolt-action hunting rifles available off the shelf.

Although intended as a counter-sniper rifle for law-enforcement agencies, this affordable, 20-inch-barreled .308 Winchester rifle caught the attention of hunters for the impressive accuracy it delivered. Savage Model 110s have always been known as good-shooting rifles, but these “police guns” shot exceptionally well, and while they were a bit heavy for general hunting applications, hunters ignored their heft. They purchased the utilitarian-looking rifles and bragged to all their hunting buddies that they had a rifle that would outshoot anything. Mostly, they were right; it was not uncommon for these 110s to shoot groups smaller than half an inch—all day long. At roughly half the price of Remington’s renowned Sendero, these rifles did not spend much time on dealer’s shelves.

Until the new millennium was upon us, most did not consider the AR-15 for anything other than tactical applications. But as the modularity of the platform evolved, and as it became more practical for hunting and widely used in competition, accuracy was greatly improved. Today, AR-15s that shoot as well as bolt-action rifles are the norm as opposed to the exception. What’s more, a handful of ARs now offer a truly incredible level of precision, and there’s none better than the JP SCR 11. With its side-charging handle and an action that runs as smooth as pulling a spoon through melted butter, this is a precision shooting machine. Chambered in .224 Valkyrie, this rifle will—seriously—drive nails at 100 yards.

There’s a reason we have Bentleys and Rolls Royces. It’s because some drivers want the ultimate example of an automobile. The same is true with some hunters; they want a rifle that is perfect, or as near to perfect as is possible. I don’t think we’ve reached that pinnacle with centerfire hunting rifles quite yet, but we may very well have done so with the rimfire. Vudoo Gun Works is the undisputed king of rimfire rifles. Vudoo owners decorate the Internet with photos of bug-hole groups, and the Vudoo V-22 action is legendary. For the small-game hunter, the company’s Raven bolt-action is squirrel-eye accurate out to 50 yards and beyond. The Raven is not cheap; 72 monthly payments equal to its price tag will, in fact, buy you a Bentley.

It was a spate of very high-dollar custom rifles that kicked off the trend of sub-MOA hunting-rifle accuracy, but my pick to represent this latest evolution in game-getting tackdrivers is this relative newcomer. A surprising introduction from a company known for battle-style rifles and self-defense handguns, the 2020 Waypoint represents the latest evolution of the bolt-action hunting rifle. Inspired by the lightweight trend started by Melvin Forbes and the extreme precision craze popularized by Kenny Jarrett, unbelievably, the Waypoint does this at a price less than either of those custom offerings sold for when they were introduced more than 30 years ago. The Waypoint delivers guaranteed sub-MOA (0.75) accuracy from a lightweight bolt-action hunting rifle that’s well configured for stalking the timber or reaching across a prairie. Chambered for cartridges like the 6.5 Creedmoor and PRC, with its modernized composite stock and carbon-fiber wrapped barrel, the Waypoint is today’s best representation of a factory-built, tackdriving rifle that everyday hunters at least have a shot at saving up for and buying.