After hunting with borrowed guns his whole life, the author finally gets a rifle of his own—and promptly uses it on the hunt of a lifetime 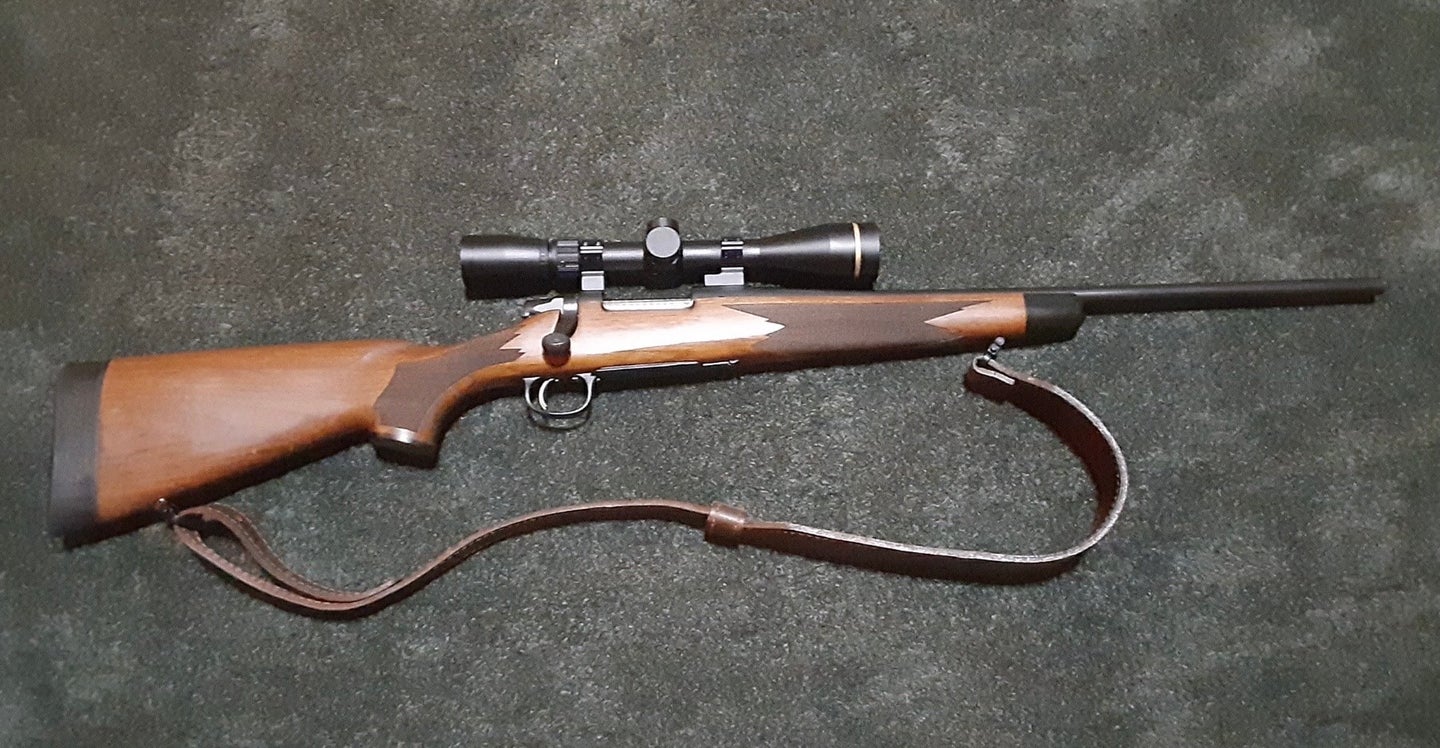 “My First Gun” is a new essay series on F&S.com. You can find the complete collection here. If you would like to submit an entry, send it to editorial@fieldandstream.com.

I started hunting, if you could call it that, long before the state of Pennsylvania would let me. I’d walk in line under the strict supervision of my older brother, uncle, grandfather, and my father, holding a crude stick in my hand hoping that as I brought it to my shoulder and yelled, “Bang!” the doves or woodcock would fall out of the sky. Instead, I incessantly crawled through the mountain laurels and scrub oaks in search of the downed pheasants shot by the seasoned hunters of my family. Still, I enjoyed the fellowship of the older folks as they swapped stories that often went over my head.

Finally, I graduated to carrying a real “stick.” But, much like everything else that comes with being the younger sibling, the gun was a hand-me-down. My maternal grandfather had given my dad a Remington Model 700 bought from Sears. It was passed from one generation to the next and then straight to me…for the time being. My father taught me the lesson that “practice makes perfect” and after hours on a public range and several boxes of .308, perfect turned to good enough. Five rounds within two inches at 100 yards would do—especially considering shots outside of 100 yards were rare in the hollows of Pennsylvania. I lugged the rifle with me through the woods during my first deer season, and hauled it into a tree stand where my father drove a mature doe right within my sweet spot and my close-enough aim. I dropped the deer right in her tracks.

Continuing the family tradition of hunting no matter what, my father helped me skip school to go for turkeys. Seeing as how that old stick was the closest thing I had for a shotgun, I once again had to borrow. Putting my paternal grandfather’s old Remington 870 super mag in the hands of a 12-year-old was like dropping a Pontiac 455 SD engine into a Honda Civic. Sitting against a wide elm as still as possible, I squeezed the trigger and felt my shoulder become a knot in the tree that I would later complain about having to split for cord wood. The turkey laid still and my love for hunting and the outdoors continued to grow.

Over the following years of hunting through high school and college, I continued to borrow family rifles and shotguns that would get the job done on a few more deer, squirrels, and pheasants. A muzzleloader handed down from my great-grandfather took down a young buck. My father’s Savage 99 in my hands equated to plenty of deer meat in our freezer. And a Marlin .30-30 took my first pig in a long overdue hunt with my father after too many years dormant.

A Change of Scenery

As I started my life after college, my next rifle was yet again borrowed—this time it was from a different family member: Uncle Sam. I carried my Colt M4 through two countries that, and you can trust me on this, aren’t worth putting on your travel itinerary. The Army did provide travels that were less worrisome, however, and took me to areas in the U.S. that I wouldn’t have otherwise seen—places like Texas, Georgia, Washington, and even California. Colorado, however, was where I felt I belonged, and Uncle Sam was more than willing to send me to Fort Carson, just outside the emerging city of Colorado Springs.

The slow, arduous pace of being back in the woods was a warm, welcomed feeling despite the cold, thin air of Colorado piercing my lungs at 9,000 feet. I finally made my way back to my roots as I climbed atop a solid, steady quarter horse and slid into my Billy Cook saddle exploring the endless wilderness of the National Forests. My whole life, what I had been calling “mountains” were merely rolling hills now dwarfed by the Rockies and their 14,000-foot peaks. I spent hours, days, and weeks in the saddle traversing the endless terrain within the National Forests before finally determining the most perfect hunting location.

After two deployments, it was time to purchase a rifle that was definitively mine. It needed to be able to handle longer shots and heavier game than PA could offer. It had to be light enough to carry up the steep slopes of the Rockies, and compact enough to fit into a scabbard that I could sling off of a saddle. A Remington rifle had taken my first deer, as well as slung lead over 1,000 meters in two foreign lands to save my hide, so I figured the brand held its own. I bought a Remington Model 7 in .308 fitted with a Leupold VX-5 3-9x scope. Simple and sturdy, yet elegant—its compact walnut stock fit much like the carbine M4 that I had become so accustomed to carrying. It was the perfect saddle gun.

Finally, second rifle season came to Colorado, which meant all of us common folk who didn’t have the foresight to apply for tags could hunt on public land with an over-the-counter tag. With nights below zero and up to two feet of snow in the forecast, I decided against bringing the horses and would weather the storm by myself in lieu of risking injury to the mares. I arrived at the San Juan Mountains in the dark after a long day of work and hiked six miles with the rifle slung over my shoulder to where I had planned to camp only to find that others had arrived before me. Horses, llamas, and people were spread out like a farmers market with a half dozen tents and meals cooking over fires. I trudged past my intended target to a pre-planned secondary location, set up camp, and finished what was left of a sandwich.

I woke in the morning with the usual excitement of opening day only to be as disappointed as the night prior. Instead of looking out into the mountainsides and seeing the brown hue of elk, all that was visible was the blaze orange of hunters. I traveled point to point in an attempt to escape the snares of other hunters only to exhaust all of my pre-planned scouting locations. After three days of running from other hunters as much as the elk were, I decided to wait out the impending snow storm in my truck. Day five proved how crazy the weather of Colorado could be when a 50-degree fall day melted the 12 to 18 inches of snow that had fallen the previous 36 hours. Since every hunter in southern Colorado had scouted and occupied the same locations I had wanted, I set off 90 degrees from my original path and headed north into a region of seemingly untouched country. I traveled up the side of the mountain as the footprints of other hunters disappeared from the snow only to be replaced by the hooves of mule deer.

I could feel in my legs and lungs the 2,000 feet of elevation gain over the four miles of hiking through knee-deep snow. While taking a quick break, I noticed a few tracks that seemed considerably larger than the muley tracks that crisscrossed the mountain side. I wandered farther off the beaten path following the tracks of these almost mythical creatures. The snow quickly deepened as I rounded the ridge onto the north side of the mountain into the avalanche shoot that the tracks stumbled into. Then a bull and three cows burst from a small patch of oaks followed by a satellite bull. I could barely get a glimpse of them as they leisurely made their way up the steep slope; my sight was limited by the last few pines before the opening in the tree line. I sprinted through the snow, dropped my ruck and used it as a rest for my rifle. I brought the stock of my Remington Model 7 to my cheek and keeping both eyes open, I looked through the scope only to see the bigger of the two bulls disappear into the next tree line, followed by his cows. The satellite bull remained about 30 yards behind, showing his inexperience by remaining in the open moments too long. I could confirm he was a legal bull—small but a trophy to me nonetheless. After one last check to ensure my bullet would only hit my intended target, I squeezed the trigger. My ears rung, as they often do, from the echo of the blast throughout the valley. He was gone.

My mind raced with the possibility of having missed. But I never miss. In my almost 20 years of hunting, I’ve never had to fire a second shot—let alone miss entirely. I marked the spot from where I fired with my ruck and a bright orange bandana and made my way to where my elk should have lay dead. What took the elk a few bounds to ascend took me 20 minutes to climb. I held my breath in anticipation until finally, 200 yards later I found blood. I followed the blood trail a few hundred more yards and bumped the bull as he made one last attempt at escape. Instinctually, I brought the Model 7 to my cheek, found my target, and squeezed. The bull tumbled down the cliff side as the .308 pierced his spine. It was over.

It took me all night to field-dress the bull. I camped for the night, high up on the ridge, as the meat from the fresh kill hung from aspen branches in the natural refrigerator that was a Colorado night at 11,000 feet. I was awoken time after time by the coyotes who had found the carcass and managed to steal a front shoulder that was hanging eight feet in the air. I wasn’t angry that I had lost part of the meat that I was raised to cherish, instead it brought me a sense of accomplishment. Competition with nature is still very much alive in this world that is run by machines and I had bested one of its most well-known competitors thanks to the help of my first own rifle, that Remington Model 7.

The Remington Model 7 still sits in my gun safe next to a few others guns that I now call my own. In my family, we understand that heirlooms are hard to come by and so we hang on to anything of value—and this rifle certainly has value. I hope that one day a nephew, son, daughter, or grandchild will come and ask me to borrow a reliable gun to call their own, and I will hand them this Model 7 to take their first game.