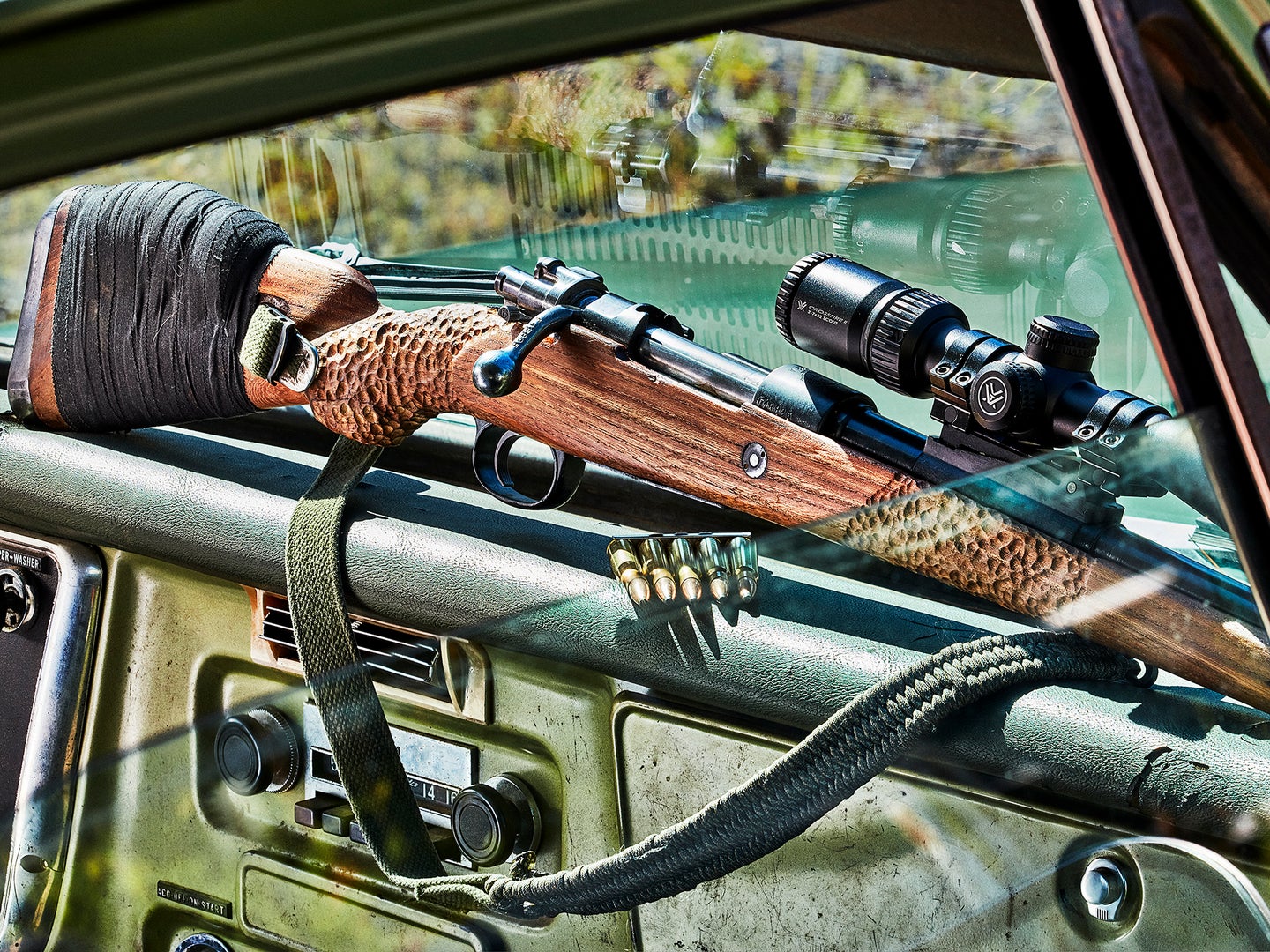 The author's Mauser scout rifle can be fed via stripper clips. Jarren Vink

My Truck Gun: A Scout Rifle From Scratch

When you ruin an old gun, you can see it as a mistake or an opportunity

THE WORST WAY to learn about corrosive ammo is to shoot some in your rifle and then let the gun sit for a few weeks. In my case, it was surplus 8mm machine-gun ammo that I’d shot through my Yugoslavian Mauser. After reading about how some military primers can rust a gun, I ran to my safe and held the rifle’s barrel up to the light. What had once been a shiny bore looked like a mine shaft.

I scrubbed the barrel for hours with every solvent I could find before I realized that my rifle would never be the same. And then I realized something else: I had nothing to lose. There wasn’t a thing I could do to the gun to devalue it further. It was a blank canvas. So I clamped the rifle into a padded vise and cut away everything that wasn’t the gun I wanted.

At the time, I was itching to build a custom rifle, but I didn’t have the tools or the money for it. On the other hand, military surplus guns have always been chopped up and cobbled into deer rifles by hobbyists, and I loved the idea of hot-rodding an older gun. I knew there were good and bad examples out there. With hacksaw in hand, I hoped I could at least fashion something in between.

I lopped off the end of the barrel, and it landed on my shop floor with a clunk. There was no turning back after that. I squared up the face of the bore with a bastard file, checking my work against a homemade jig as I went. A crowning tool would cost as much as I’d paid for the rifle, so I made my own with a section of brass rod and a countersink bit. I cut a crude but effective crown with my electric drill on the slowest setting. Then I went to work on the stock.

I threw out the top hand guard, shaved off as much wood as possible, and rounded the tip of the fore-end. The wood was saturated with Cosmoline, so I put it in the sun and wiped off the grease as it leaked from the pores. Once it was clean, I stippled the grip and fore-end with a Dremel tool and finished the gun off with a scout scope, a Timney trigger, and a paracord sling before heading to the range.

Read Next: My Truck Gun: The Answer

Given the corrosion and all my new modifications, I wasn’t sure if I could even get the gun to shoot on paper. Miraculously, it printed a 1 1⁄2-inch group at 50 yards. When I tried to shoot farther, the scope ran out of elevation, so I shimmed the back ring with aluminum from a beer can. Then every shot I took at the 100-yard plate connected—which was far better accuracy than I deserved. When I got home, I cleaned the bore and put the gun right where it belonged—in a case behind the bench seat of my F-150.