What makes a better pump gun? Our shotguns editor weighs in to declare a winner 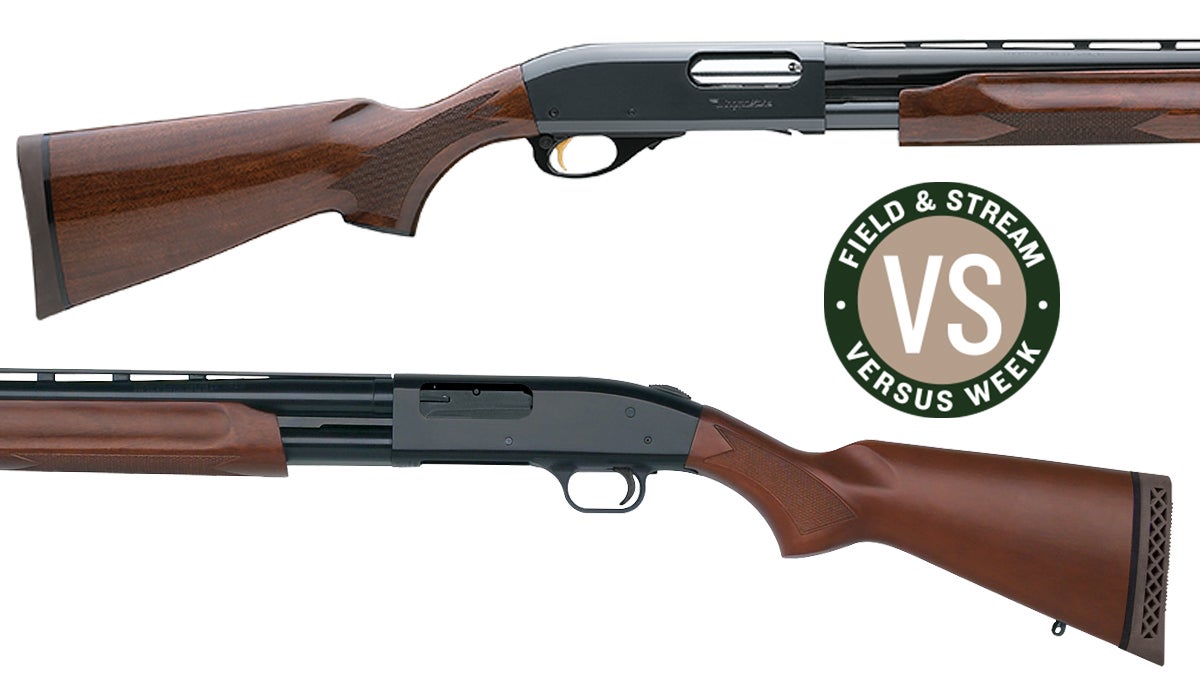 Both the 870 and 500 have their own followings, but which pump shotgun is better?. Field & Stream
SHARE

If “Shotgun Questions” was ever a “Family Feud” topic,  “Should I buy a Remington 870 or a Mossberg 500?” would be the top answer. It’s a question shotgunners have asked since the debut of the 500, almost a dozen years after the first 870 was made. Both are triumphs of post-WWII mass production and both have been made by the million. But, the question is, which one is better?

In the late 1940s, Remington offered a great pump gun, the Model 31. It was smooth, slick, and made from carefully machined and fitted parts. There were target versions, hunting versions, and a lightweight alloy frame model. Many pump gun fanatics will tell you they prefer the Model 31 to its competitor, the Winchester Model 12, but the public voted otherwise with their wallets. Unable to beat the Model 12 head-to-head, Remington came up with a gun to undercut the Model 12 and kill it.

And, despite selling for what would be $160 less than a Model 12 today, the 870 worked wonderfully. Previous pumps had just one action bar, which could twist or bind. The 870 had two. And, it had a stock that fit almost everyone, with enough drop and a thin comb so anyone could get their head down on it properly. It was a shooter. In 1950, trap legend Rudy Etchen used an 870 to become the first shooter ever to break 100 straight trap doubles with a pump gun.

The 870 was a hit, and as the years passed and costs rose, the Model 12 couldn’t stay close in price. Winchester tried to compete with the Model 12 Lightweight, a cheaper, lighter, more 870-like Model 12, but it was too little, too late. In 1964—the Year the Music Died at Winchester—Winchester ran up the white flag and replaced the Model 12 with the cheaper, mass-produced Model 1200. Meanwhile, the unstoppable 870 reached one million made in 1966 and hit the two million mark in 1973. There were 870s in all gauges, and for all purposes from clay shooting to combat operations.

Perhaps hearing the cheaper Mossberg 500’s footsteps closing in from behind, Remington added the 870 Express to its lineup in 1987. With a hardwood stock, bead-blasted finish, and internal parts that were polished just once, not twice as with other 870s, the Express sold for significantly less than the glossy, sleek Wingmaster.

Read Next: The 20 Best American Shotguns Ever Made

Up until 1962, O.F. Mossberg was known primarily for rimfire rifles. Perhaps the company saw the 870’s success and decided there was room for two in the affordable pump gun market. Maybe they smelled blood in the water as the Model 12 foundered. The Model 500 kept costs low with investment cast parts and an alloy receiver. A thumb-operated safety on top of the receiver set it apart from other pumps, too.

From the very beginning, Mossberg offered extra barrels and promoted the gun’s versatility and value, eventually advertising it as a “Shooting System.” For a time, Mossberg offered the Model 500 in trap grades, and, believe or not, in a fancy Pigeon Grade, but those guns represented steps in the wrong direction, for what the Model 500 proved to be, more than anything else, was a great, cheap shotgun.

And, as a cheap gun, it had its detractors. They noticed when Mossberg stopped using metal for the top safety and switched to plastic. They mocked the gun’s magazine plug, a simple wooden dowel (“People complain about that plug, but we have never had a single gun returned because of it, nor even the slightest problem with it,” a friend who worked for Mossberg once told me.) One entity that never thought the Model 500 was junk was the U.S. military, which certified the gun as the only shotgun to ever pass its MilSpec 3443 requirement, which includes a 3,000 round buckshot test. Because the military didn’t allow plastic parts at the time, Mossberg made the 590, which differs only from the 500 by dint of its metal trigger guard and crossbolt safety.

In the 1980s, Mossberg went to town on the whole “Shooting System” approach, and the Model 500 became one of the most versatile, innovative shotguns on the market, for which it never received enough credit. You could buy barrels from 18 ½ to 38 inches long for it. It was the first production gun available with a rifled slug barrel and cantilever scope mount, and I believe it was the first production shotgun available with a camo finish. You could buy a Dual Comb stock for it, to raise the comb for scope use with your slug barrel, and lower it for wingshooting. There was even an inline muzzleloader barrel that fit onto any 500 without gunsmithing.

If it bothers you that the 870 killed off an American classic in the Model 12 by undercutting it, you can take grim satisfaction in the fact the Model 500, a gun which borrowed heavily from the 870s predecessor, the Remington Model 31, ultimately won the race to the bottom and practically killed the 870. In the 2000s, Mossberg and Remington competed in price. The Model 500 always undersold the 870 Express by a few dollars, and Remington had to cut costs to keep up.

As the guns got cheaper, 870s turned less reliable, and those of us who may have dismissed the Model 500 in the day began to realize that Mossberg had designed a gun that could be made very cheaply and still work. Dare I say it, it could be made cheaply and still be great. Meanwhile, 870s were anything but great. In the 2000s I traveled to Ilion for my second tour of the factory, and I was presented with an LH 12 gauge Express with my name on the stock. It was a lovely gesture, but the gun didn’t work. Shells stuck in the chambers. When they didn’t stick, they hung up. I took every salvageable part off the gun and threw the rest of it away. By comparison, the Model 500 was looking better and better. By those days, when readers asked which of the two to buy, my standard answer changed. I told them to get a Mossberg.

Remington had other problems that caused the 870’s decline, primarily the company’s acquisition by a predatory private equity company. Still, following Remington’s recent bankruptcy and subsequent purchase by its new ownership, the 870 Express will be discontinued. Just as the Model 12 lost to the 870, the 870 lost to the Model 500. When the 870 does return later this year, it will be as the FieldMaster, a gun that will sell for around $100 more than a Model 500 rather than compete with it.

Read Next: The 50 Best Shotguns of All Time

While the Model 500 may have proven its budget greatness and beaten the Express in the race to the bottom, it’s a gun that has won my respect, but not my affection. It’s a classic in its own way, but I don’t want one. If I had to choose one gun among all twenty-five million or so 870s and 500s ever made, it would undoubtedly be an 870 Wingmaster Magnum from the late 70s or 80s, the era of glossy wood and pressed fluer-de-lis checkering. Those guns were deeply blued, gloriously slick, and they shot forever. That shiny varnish was originally developed by DuPont to put on bowling pins, so you know it’s tough, and the checkering that looked so cheesy back then looks cool and retro today. If you think I’m the only one who feels that way, check out what those used Wingmasters fetch these days and get back to me.