The latest rimfire handgun from Sig Sauer is reliable, versatile, and just plain fun to shoot 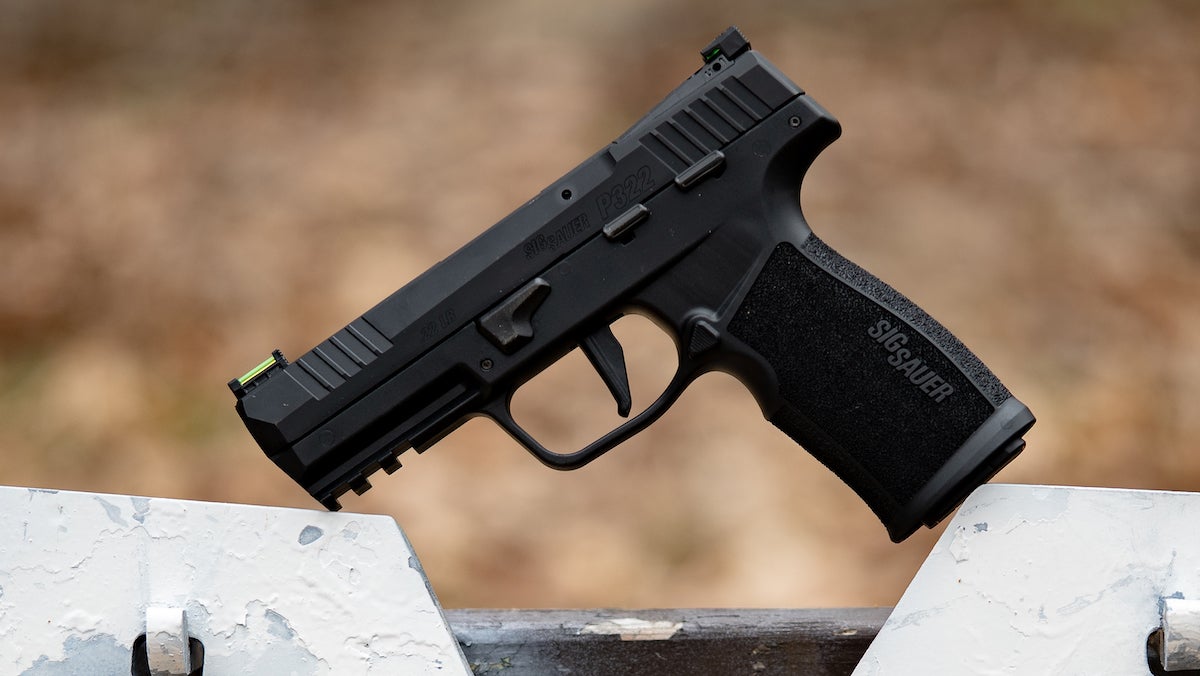 Just a week prior to the beginning of our 2022 handgun test, Sig Sauer introduced their P322. With Sig Sauer’s fan base, and with the popularity of their P365 and P320 pistols, the P322 was instantly in demand. We managed to pull some strings and get one to include in our test and we’re glad we did. Though the Taurus TX22 Competition SCR edged out the P322 by just over a single point for the Editor’s pick, we felt the Sig Sauer P322 was the most fun to shoot. I liked it better than the Taurus but we were committed to sticking to our scores. Here’s a more in-depth look at the latest rimfire from Sig Sauer.

The Bad News About The Sig P322

Like with any handgun, there’s some good and bad news. In the case of the P322, there’s very little bad news so let’s get it out of the way. Problem number one is that, except for some inexpensive generic holsters, Sig Sauer and Comp-Tac are the only companies currently offering holsters to fit the P322. Both are polymer, and the SIG holster retails for $29.99 and the Comp-Tac for $69.99. As popular as I expect this pistol will become, that will likely soon change.

The second bad thing we found is that you must take care when loading the magazines. If you don’t, it’s possible you’ll have a stoppage. You can’t just shove rounds in the magazine willy-nilly and get to shooting. When loading the magazine, you need to take care that each round is properly positioned. In other words, they need to stack squarely and consistently. While this might sound like a serious issue, it’s not. Once you commit to paying attention to what you’re doing, it has no adverse impact on loading time or shooting pleasure.

The Good News About The Sig P322

Now we can get to the good stuff and there’s a lot of it. For starters, this pistol weighs only 17 ounces, which is incredibly light for any handgun. It also comes with a fiber optic front sight and fully adjustable fiber optic rear sight. Also, the rear sight is integral to a slide plate that can be removed to allow for the attachment of a miniature reflex sight. But what really sets this pistol apart is capacity. Those magazines that must be loaded correctly will hold 20-rounds each, and the pistol comes with two of them. Load them both up and you can damn near empty a box of ammunition in one shooting session.

What you’ll also find surprising is that while the P322 looks similar to the P320 and P365, it is not a striker-fired pistol. When you remove the slide, you can see that there’s a hammer hidden beneath it at the rear of the frame; the P322 is a single-action, semi-automatic. This goes a long way towards explaining why the trigger feels so good. With just a little bit of take-up, the trigger on the P322 we tested consistently broke at only 3 pounds. And, according to Sig, you can safely dry fire this pistol as much as you want without damaging it. Also, the pistol ships with two trigger shoes. One is flat and the other is curved, and they can be easily switched in just seconds.

The grip on the P322 filled my hand well and I wear large or extra-large gloves. But it was not too big for younger shooters. My oldest daughter is 18 but she’s only five feet tall and has small hands. She had no problem at all with the grip on the P322. In addition to being hand-friendly, the P322 is completely ambidextrous; a manual thumb safety and slide lock are located on both sides of the pistol, and the magazine release is reversible.

The takedown lever is the only non-ambidextrous control on the P322, and since this is not a striker-fired handgun, you don’t have to pull the trigger before disassembly. All you need to do—after fully unloading—is rotate the takedown lever up, pull the slide to the rear and up, and then slide it off the frame. The barrel is integral to the frame and the recoil spring is held captive by a nut on the threaded muzzle. Assembly is just as easy and is done in reverse order. If you want to run a suppressor on the P322, you simply replace the standard barrel nut with the dual-threaded version that comes with the pistol.

We tested two loads out of the P322 from a sandbag rest at 10 yards. The sights were spot on at 10 yards right out of the box and CCI’s Clean 22 load averaged 0.85-inch for three-five-shot groups; their Mini-Mag load averaged 0.90-inch. We fired almost 1000 rounds through this pistol, including about 400 rounds with each of the CCI loads and another 200 rounds of Federal’s new .22 LR Punch load. Except for when the magazines were not loaded properly, we didn’t have any issues.

I’ve continued to have fun with this pistol even after our handgun test was over. I removed the slide plate and installed a Crimson Trace mini reflex sight. Every couple of days I step out to my range and bang away. The P322 provides a much more affordable way to practice with a reflex sight on a pistol. I also think that when the right holster becomes available, the P322 would make a great trail and small-game handgun. And since our testing was completed, Sig Sauer is now offering a 25-round P322 magazine. Two of those will destroy a box of 22 LR ammo.

Read Next: Why Every Outdoorsman Needs a .22 Pistol

If you’re considering a new 22 pistol, my advice would be to start your search with the P322. Due to demand, prices have yet to stabilize; I’ve seen them listed as high as $700 and as low as $320. But when supply catches up with demand, they should settle in at around $400. If you do get a P322, I would advise that you buy a lot—and I mean a lot—of ammo, because I don’t think you’ll ever get tired of shooting this pistol. If you’re in a family of shooters, you might even have to fight for range time.