What should you load your rifle with this fall? In this week's F&S Bullet Lab, we test Winchester's all-copper deer bullet to help you decide 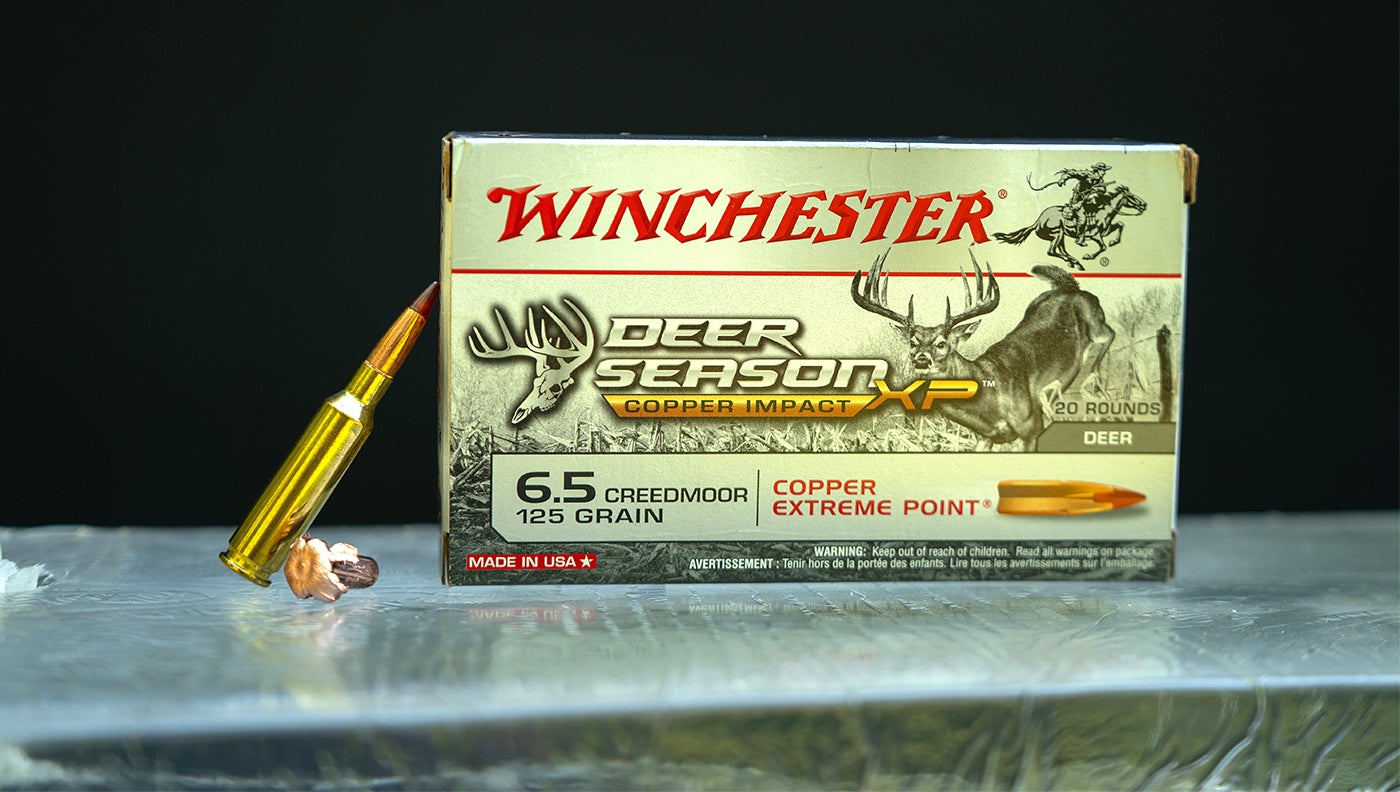 Winchester’s line of Deer Season ammunition for the 6.5 Creedmoor includes two different loads: the original Extreme Point and the Copper Impact Extreme Point (or XP) . The first load is designed to deliver ultra-wide bullet upset for maximum energy transfer at shallow depth. If you read the description of the Copper Impact XP load we tested, you’d likely conclude that it would perform similarly. I did, at least. But I was in for a surprise.

The Copper Impact XP bullet is all-coper, and like other all-copper mono-metal bullets that are designed to upset on impact, it is essentially a hollow-point bullet. The reason it doesn’t look like a hollow-point bullet is because Winchester plugs the hollow cavity in the nose of the bullet with a polymer tip. One thing that sets the Copper Impact XP bullet apart from similar designs is that its polymer tip is about twice as large as others.

I subjected this load to my standard testing protocol for hunting ammunition. I fired 10 shots over a chronograph with the screens placed 10 feet from the muzzle, and I also fired three three-shot groups from a sandbag rest at 100 yards. Finally, I fired a bullet into blocks of Clear Ballistics gel at 100 yards. All of this is to help you figure out what bullet (or bullets) you should be hunting with this fall. Here are the results.

For a 125-grain bullet fired from a 6.5 Creedmoor, the Copper Impact XP’s average velocity was about what you would expect, at 2843 fps. It was also very close to the load’s advertised 2850 fps. However, velocity consistency from round to round was what I would consider below average. For a 10-shot string fired over a chronograph, the maximum velocity deviation was 81 fps, with a standard deviation of 31.3 fps. For reaching out to around 400 yards, this is not an issue, but extreme shot-to-shot velocity variations can cause vertical stringing at extreme distance.

I tested this load in a Nosler Model 21 rifle that has a 22-inch Shilen barrel and is topped off with a Tract Toric UHD 2.5-15X44 riflescope. The average for the three, three-shot groups I fired was an impressive 0.83 inches. I’ve tested quite a few loads in this rifle and to date this is one of the top performers. It’s an excellent level of precision from factory hunting ammunition and is more than sufficient to take you out to around 500 yards, which is about as far you can rely on this bullet to upset on impact.

The general assumption is that the 6.5 Creedmoor shoots flatter than similar-sized cartridges that have comparable or even more recoil. This can be true, but for the Creedmoor to perform that way, it must have a bullet with a high ballistic coefficient (BC)—generally a BC higher than 0.500. The BC for the 125-grain Copper Impact XP bullet is only 0.428, which means this is not the best factory 6.5 Creedmoor load for extreme distance. Due to this sub-0.500 BC, velocity will drop off faster, and bullets need a certain amount of velocity to open on impact. That said, this bullet will do fine at in-field distances that most of us would consider reasonable. With a 100-yard zero, it drops about 29 inches at 400 yards.

I expected this all-copper bullet to deform with a very wide frontal diameter. I thought this partly because of the oversized tip, but also partly because of the information on Winchester’s website that says, “The Copper Extreme Point bullet is a solid copper expanding projectile with an oversized impact diameter. A bigger impact diameter means more trauma, better energy transfer, and larger wound cavities for faster knockdown.” But the bullet I shot and recovered from ballistics told a different story. It opened with a frontal diameter measuring 0.467-inch, which is what I would call normal for an all-copper mono-metal bullet.

While I do not think the terminal performance of this bullet agrees with how Winchester describes it, it is not bad terminal performance; the bullet penetrated an impressive 31 inches in Clear Ballistics. Out of a 6.5 Creedmoor, you only get penetration like this with a bullet that retains most of its weight and does not deform with an overly large frontal area. The recovered Copper Impact XP bullet weighed 123.2 grains, suggesting the only weight it lost was that of its polymer tip.

For deer, I prefer a bullet that transfers a lot of energy early on, but this should be a fantastic 6.5 Creedmoor bullet for bigger game. It’s lead-free, which is required in some locations and preferred by some hunters. The load also delivered a high level of precision, and it will penetrate deep enough to handle any game animal the 6.5 Creedmoor is suited for. Mono-metal bullets generally need to impact between 1900 and 2100 fps to show any meaningful deformation. I expect this bullet is no different, but it could possibly open at even slower velocities due to its large tip and hollow cavity.

I remain flabbergasted that in this new age of long-range shooting, manufacturers do not list the minimal impact velocity needed for bullet upset on the box or at least on their websites. This leaves us with nothing but a guess when trying to effectively establish the effective range of the ammunition we’re considering for hunting. But all the other data I was able to collect on the Copper Impact XP proves that it penetrates deeply and retains almost all of its weight—two characteristics most hunter want in bullet for larger, big-boned animals. In other words, if you’re looking for a good 6.5 elk bullet, or maybe an elk/mule deer bullet, this should be a good one.