How to Cook Birria Ramen with Canada Goose Meat

You'll need to set aside plenty of time to prepare this smoky, spicy dish—but trust us, it's worth the effort 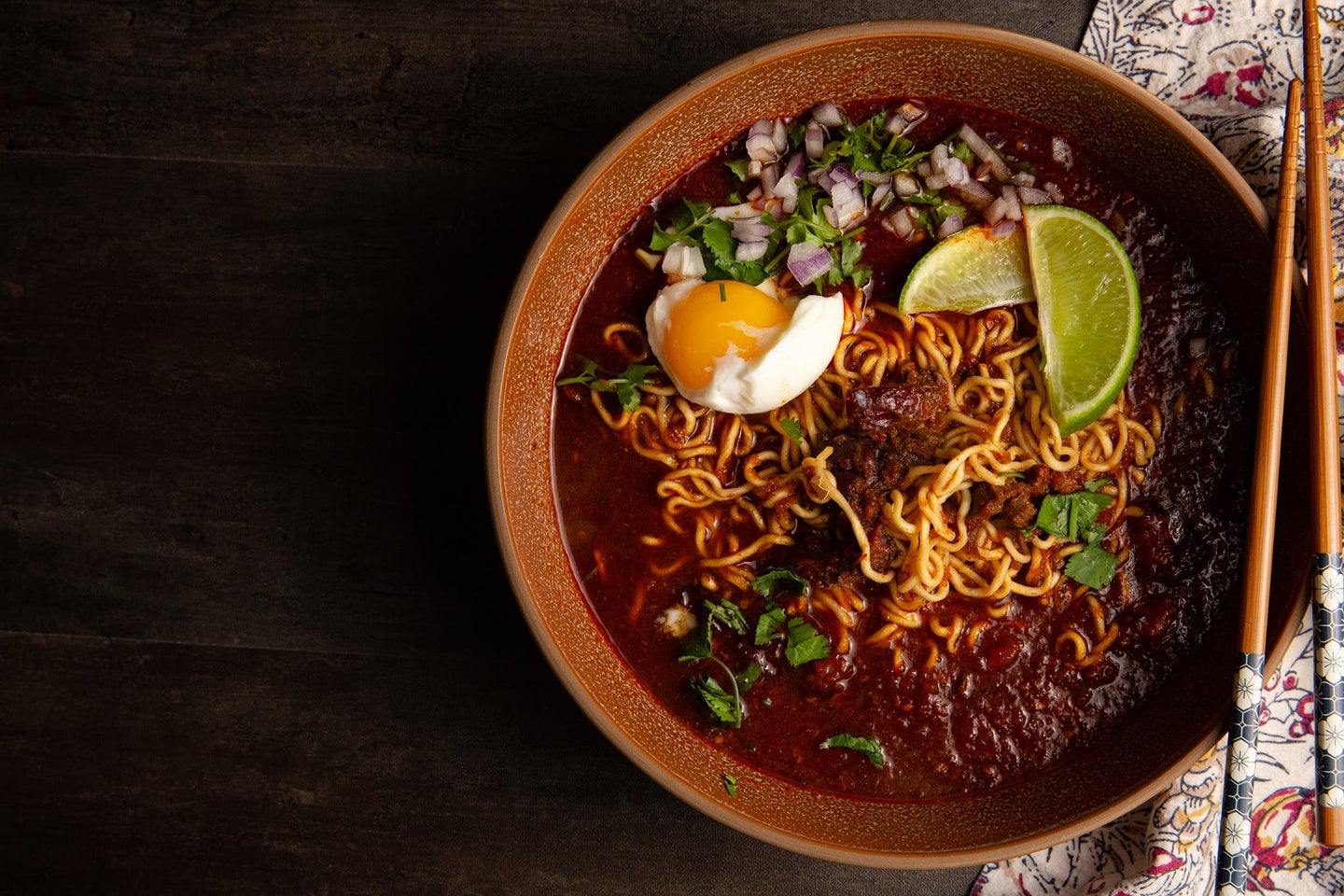 Birria is a famous Mexican stew or soup made with chili peppers and, traditionally, goat meat. It originated in the areas of Jalisco and Michoacán, as I understand, but continues to grow in popularity worldwide, with many variations popping up on social media. Inspiration for this particular dish comes from @Jun.and.Tonic on Instagram, as he combined birria with ramen. Immediately folks in the comments brought their pitchforks and claimed this wasn’t birria. Apparently they didn’t read: birria ramen.

The similarities between my variation and Jun’s basically ends with the concept. The recipe is vastly different, with the main difference being that I call for Canada goose here, and not beef. I do recommend using legs for this, as the bones add great flavor and depth to this broth. Duck legs will also work for this recipe.

Legs take a lot of time to tenderize, so be prepared to set aside at least 12 hours before planning to eat. I recommend a slow cooker (minimum 6-quart size) for cooking and a steel China cap strainer for turning peppers into paste. Some folks blend rehydrated peppers, but then you get the bits of pepper skin in broth, which I believe ruins the texture. Still, blending versus straining and turning peppers into paste is an option.

If you don’t own a smoker or don’t want to smoke goose and vegetables, you don’t have to. Just sear goose instead and roast vegetables until slightly charred and soft. Then proceed with rest of recipe.

Lightly salt and pepper all of the Canada goose cuts. Slice the onion into 3-4 rings and lightly oil the tomatoes with olive oil. Smoke the goose cuts, tomatoes, and sliced onions for 2 hours at 200 degrees Fahrenheit.

Meanwhile, in a large pot, bring water to a low simmer and add the dried chile peppers. Rehydrate for an hour, then put them through a stainless-steel China cap strainer. Make sure to drain the water; mashing the chiles a little further helps release the water to drain. Do not overcrowd the strainer. Instead, push the rehydrated chiles through the sieve, creating a paste on the outside. A sturdy, thick spoon or pestle helps here. Have a bowl underneath to catch the paste. Use a rubber spatula to scrape the outer sides of the strainer to get the leftover paste into the bowl. Continue putting the rehydrated chiles through the cap strainer until you’re done. You should have 1 to 1 1/2 cups of paste from this. Set aside.

When the goose, tomatoes, and onions are done, remove them from the smoker. Add the tomatoes and onions to a food processor (or blender, preferably). Lightly season them with salt and pepper, add the garlic cloves, and blend thoroughly. Add the contents to a slow-cooker (minimum 6-quart size) along with the beer, beef stock, apple juice, soy sauce, mirin sweet rice wine, rice vinegar, brown sugar, cumin, paprika, oregano, and coriander.

Next, add the goose legs into the slow cooker, and cook for 5 hours on high. Remove the goose legs and use a knife to trim off as much of the meat as possible, then add it back to pot. There will likely be meat still on the bones, so add those bones back to slow cooker as well. Reduce the heat to low, and cook for at least 3 more hours, or until the meat is fork tender. Season to taste with salt. (I add sprinklings of salt until the maximum flavor comes out—so broth has zero tones of blandness—but careful not to over-salt.)

When the Canada goose is fork tender and falling apart easily, cook the ramen noodles and strain the water. Serve the noodles in individual bowls and ladle in the broth from the slow cooker along with shredded bits of the goose meat. Top with everything and anything—a poached egg, freshly sliced jalapeños, lime slices, freshly chopped cilantro, or finely minced red onion.