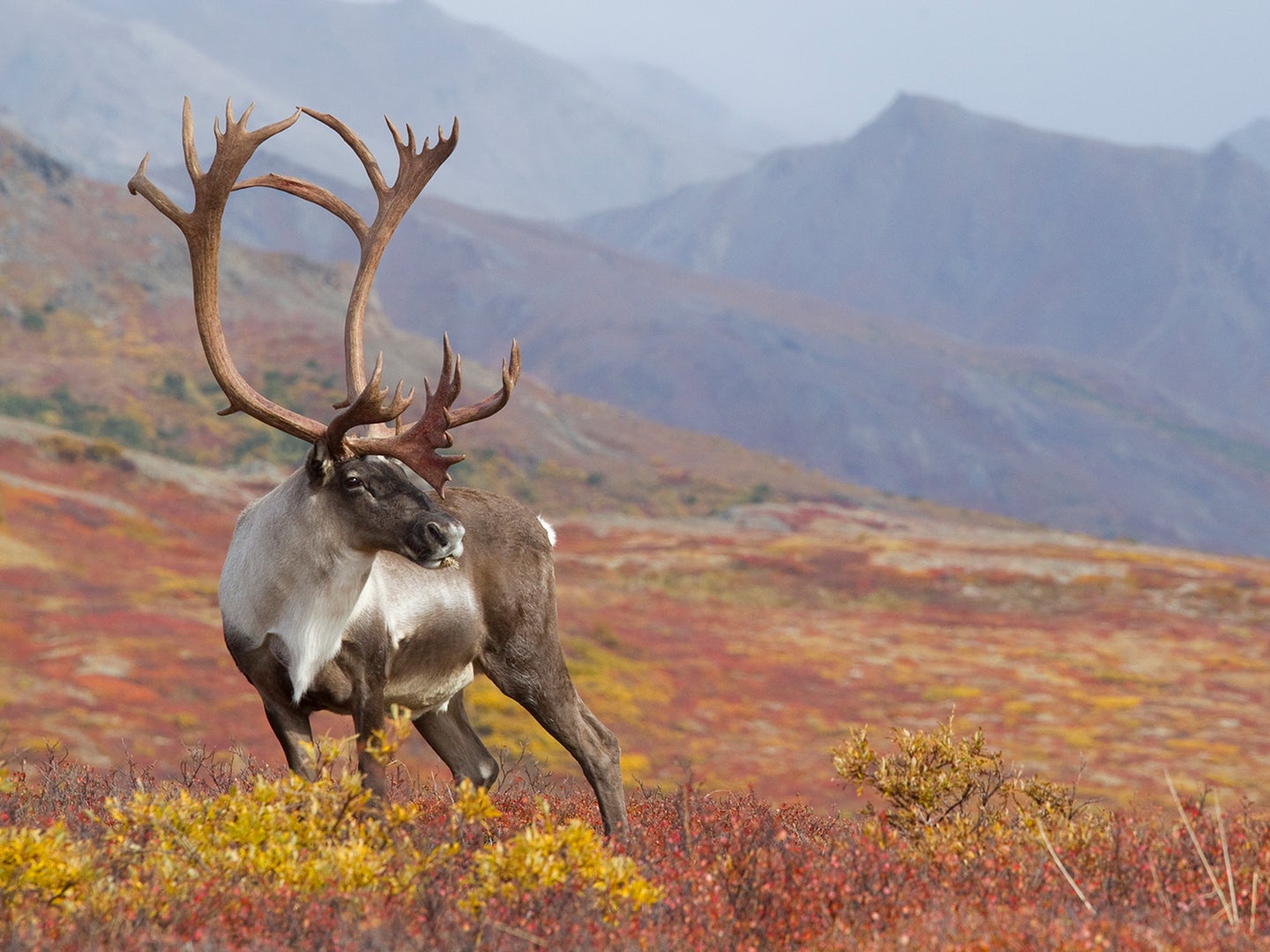 Caribou have terrific eyesight and can trot for miles and miles across the tundra if they catch a glimpse of you. Donald M. Jones

Want to Get Away From It All? Go Caribou Hunting

For those looking for a genuine, wilderness escape, a caribou camp in Canada’s far north is about as remote as it gets

SO YOU REALLY, most sincerely, want to get away from it all? I have bad news for you, Bunkie. There’s a Florida family named Means who have made a hobby of finding the most remote spots in the U.S. Of the 33 states they’ve visited, the average remotest spot was 6.8 miles from a road and 0.8 mile from a trail, and two-thirds of these places had cell phone coverage.

This does not speak well for your chances of seclusion. However, I have a solution. It’s called the caribou, and it lives in the far north where the weather and the bugs are so extreme that the only people who can live there are the Indigenous ones who have had thousands of years to adapt.

I got my caribou-hunting start in Quebec, about 1,000 miles north of Quebec City. To get there, you took a chartered jet from Quebec City to a nearly deserted town named Schefferville, which is the most horrible place in the world, and then took a floatplane from Schefferville to your camp. Flying was something of an adventure, because the land is a subarctic wilderness, featureless to the eye of anyone who doesn’t live there, and the iron-laden Laurentian Plateau, on which most of Northern Quebec sits, makes compasses useless (this was before GPS). The floatplanes flew very low so the pilot would not miss a key tree or pile of bear shit in his navigation. When you landed, you were, by God, in the wilderness. I began to appreciate this when I leaned out of the Zodiac rubber boat, took a drink from the lake on which we were traveling, and did not get sick. It was wonderful.

All caribou (Rangifer tarandus) are considered members of one species, but there are seven subspecies scattered haphazardly throughout Alaska, the Northwest Territories, the Yukon, Nunavut, and just about all of the other Canadian provinces. The bulls can grow spectacular antlers. Their hides are a marvel, supposedly the warmest of all animal pelts. The hairs are hollow and buoyant, so when caribou swim (and they’re very good at it), they ride high out of the water. A big bull will weigh 300 to 400 pounds (depending on subspecies), and all of them are very good eating.

Caribou hunting is a feast-or-famine proposition. They’re essentially herd animals, but you often see them alone, or in pairs, or in groups of half a dozen. However, they migrate in huge groups, and it can be a case of you sitting in camp, watching them pour by in the hundreds and wondering which one you’ll drop the hammer on.

This has never happened to me. I think that every caribou I’ve ever shot has cost me several pounds in body weight that I walked off. And it’s difficult walking. Mountain caribou have the decency to live on mountains, and you get to hunt them on horseback. However, a great many of them live in the vast bogs of the far north. This means you get to navigate hummocks of moss that give way under your weight, water holes, mud, and the occasional sinkhole.

On one occasion, the young man guiding me on a Quebec hunt got into one of these sinkholes and was unable to get himself out. He had sunk up to his chest, but he kept his head and wrestled out of his pack. I threw a line to him, and I pulled, and he swam, and he made it to dry land, such as it was. (The moral of the story is this: Do not go hunting by yourself in caribou country. If you get in trouble, a helicopter will not appear overhead in response to your call.)

Tracking caribou is pretty much impossible. The country in which they live does not take and hold hoofprints. A competent guide will have scouted the surrounding country and have a reasonable idea of where they hang out, so you hike there, get up on a ridgetop with a spotting scope, and see what is what. If you see a likely prospect, you then try to stalk to within shooting range. This is a challenge since it’s all open country. Caribou are not the intellectual giants that elk are, but if they get a whiff of you, they may decide to leave, and if you go marching o’er the tundra like a soldier on parade, they may go trotting off. Caribou have terrific eyesight.

Caribou trot. I can’t recall seeing one at a gallop. But they can trot forever, making an odd clicking noise that comes from a tendon in their hooves. How far can they trot? Wolves, which are their principal predator, can cover 100 miles in a day. That gives you some idea.

Part of the charm of caribou country is the other wondrous wildlife you’ll see. There are Arctic foxes and wolves and wolverines and bears. On a hunt in Nunavut, I, a friend, and our guide were on the top of a slope seeing what was what when I spotted what I at first thought was the biggest wolverine of all time heading toward us.

It turned out to be a young grizzly boar, half of whose face had been bitten off in a fight with another grizz. He spotted us, sat down on his rump maybe 70 yards away, had a good scratch, and tried to figure out what we were. My friend and I were enchanted—there is no other word—but our guide was something less than thrilled. After a couple of minutes, he’d had enough and pegged a couple of rocks at the beast, who took the hint and wandered off, possibly to find a plastic surgeon.

(And here I must deliver a lecture: If you’re there to hunt caribou, don’t go smoking up the local predators because you can train your rifle on them. It won’t make you a hero. Quite the opposite. In Quebec, the members of our hunting camp were on the boat heading out to the floatplane to go home when the two biggest caribou anyone had ever seen ran through our now-deserted camp, being coursed by two snow-white wolves. No one reached for a gun to kill a wolf.)

You won’t have these experiences in the lower 48. While you’re there, you won’t hike over a ridge to find a paved road on the other side. Your cell phone will remain mute and blank. There will be no sound except the wind, and no planes will cross the sky. The land is as it has been for thousands of years, and it will probably stay like that for a while to come.

If you show up there, it’s an intrusion.

You, however, may consider it an escape—probably the only real one left.