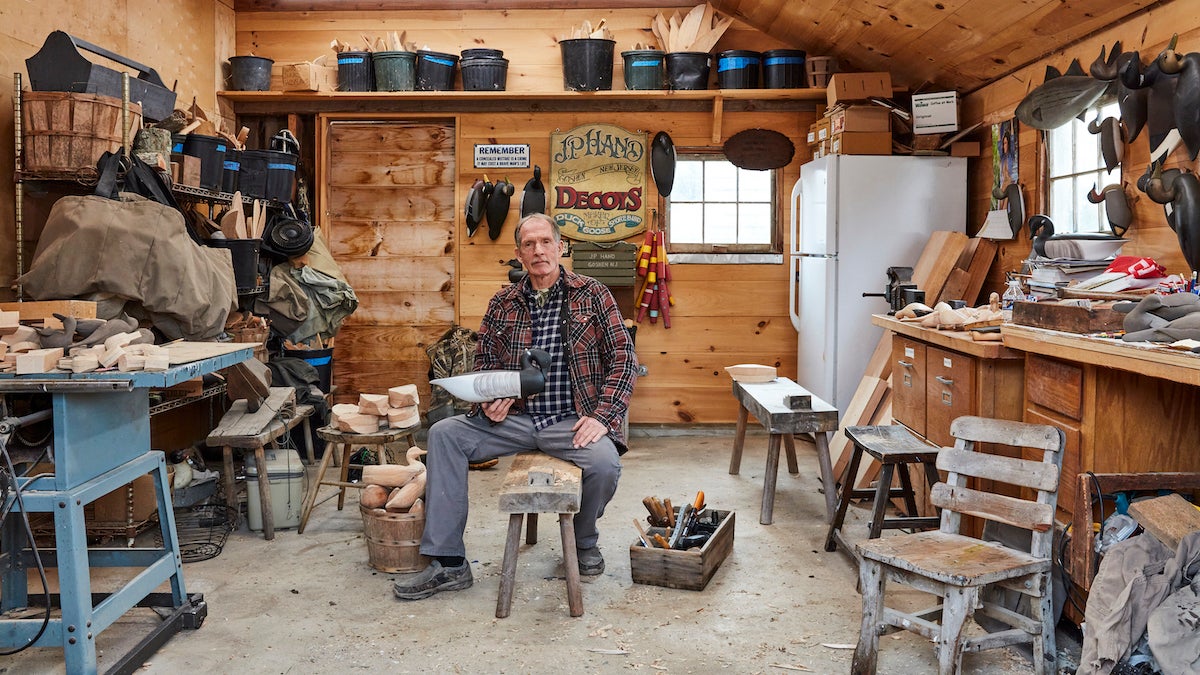 The Con Artist: Step Inside the Workshop of Decoy Carver J.P. Hand

With a few basic tools and a lifetime of experience, New Jersey craftsman J.P. Hand brings blocks of wood to life

J.P. HAND sits at his workbench placing a freshly painted rig of 10 brant decoys into a slot bag while we get ready to hunt in the morning. He constructed each brant from three pieces of Atlantic white cedar with the kind of tools most people have in their woodsheds—a hatchet, some knives, and a bit of sandpaper. But when you pick one up, it’s light, as a bird is light, and looks so natural it’s as if it hatched from a wooden egg.

Everything about Hand’s shop seems to be from the past. The furniture looks as though it was made more than a century ago, and there’s a noticeable lack of power tools, save for a band saw, a drill, and a table saw being used only as a table. Yet the decoys he makes, and the techniques he uses to make them, are as relevant as ever.

Store-bought plastic decoys, with detailed wings and feathers, may look like ducks, but Hand’s wooden decoys exude life and attitude. Each of them displays a kind of personality—a mixture of the bird’s and his own. Hand started carving at 17 when he couldn’t afford to buy decoys, and now, at 68, he’s made a living carving and guiding out of his home and small farm near Cape May Court House, New Jersey.

He is also a historian, tracing his family’s history back 325 years to when the first of his ancestors settled on the South Jersey coast and eventually started carving decoys themselves. Today, he sells his decoys to hunters and collectors all over the world and has taken on a number of apprentices.

Like any good artist, Hand knows how to look at things. He is constantly observing wild birds at his farm and on the saltwater marshes near his home, and he is always looking for ways to use the natural materials he finds nearby to portray them. Above all, he can see the character of a bird and freeze it into a wooden decoy that somehow appears to have all the movement of the real thing.

Read Next: Q&A: Jerry Talton on Carving Decoys And Carrying on Tradition

The result of his work is best described by Hand’s friend and fellow carver Pete Peterson, who left me this note before I headed home after our hunt: “A hand-carved decoy is poetry in the making and magic on the water—a man’s autograph in wood.”