Q&A: Jerry Talton on Carving Decoys And Carrying on Tradition 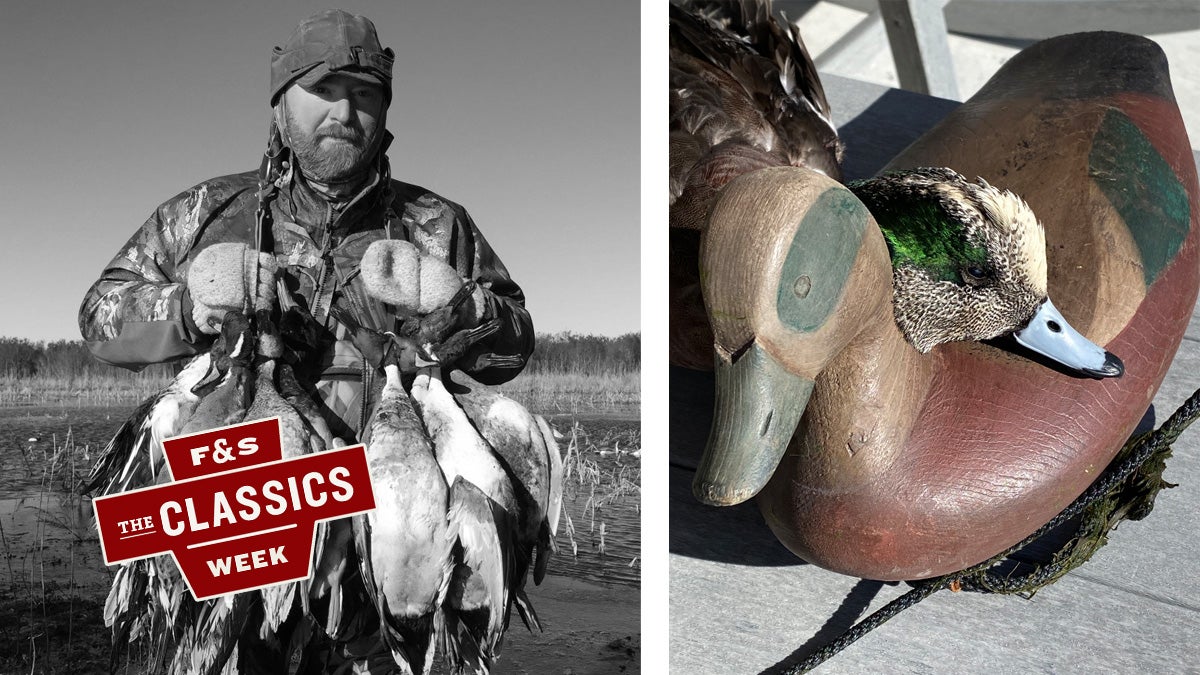 Until he carved his first decoys, Jerry Talton was, by his own description, a “wild-ass redneck surfer dude” from the North Carolina coast. His brother was actually the duck hunter, and one year, Talton bought him an antique hand-carved decoy for Christmas. Because he shaped his own surfboards, Talton noticed something about the decoy. “It was just a surfboard with a duck head on it,” he says. “From then on, it was full-on duck mental illness.”

Today, Talton carves about 75 to 100 decoys per year. Most are already sold before the paint dries. He’s also on the Board of Directors of the Core Sound Carvers Guild where he mentors others on how to make traditional wooden decoys. And it’s in that Core Sound genre, that Talton has found his own style. He doesn’t carve decoys to look just like ducks. Nor should his blocks be interpreted as nostalgic throwbacks. Talton carves heirloom-quality decoys that are equally at home on the fireplace mantle as they are in the marsh, and that’s no simple thing.

Do you ever hunt over plastic decoys?

I’m proud to say, I don’t think I’ve hunted over a plastic decoy since 2007. It’s not because I don’t think plastic decoys work. They do. I just enjoy hunting over wood and cork. You spend way more time looking at decoys than at ducks. Life’s so short, why in the world would you want to hunt over plastic decoys?

Have you carved them all yourself, or are there decoys in your spread from other carvers?

It’s a mixed rig. Most of my decoys get sold or traded, and most of what I hunt over are actually made by others. I’d say the majority are made by Jamie Hand from New Jersey.

What sets the Core Sound decoys apart from other hand-carved decoys?

When it comes to decoys, “Core Sound” is a broad term. The style was developed based on the availability of wood and what carvers had to look at. In the mid- to late 1800s, Core Sound carvers were looking at factory decoys from Detroit, as well as the work of carvers from Long Island, and Maryland. The Core Sound style is unique in that it’s a blend of all of those styles.

The simple elegance. They’re simple, but they’re sexy. They’re like the little black dress of decoys. A friend of mine named Pete Peterson, who lives on the Eastern Shore, once described Core Sound decoys as being exactly what you need, nothing more—just the essence of a decoy.

When you sit down to carve, what are you thinking about? Do you know exactly what you’re going to make, or does it come to you as you’re going?

My process starts with a pattern. When I’m drawing the pattern, I’m thinking of how I’m going to paint the decoy. I’m thinking of how it’s going to be shaped, what attitude the decoy is going to have. After it’s drawn, transferred to wood, and cut out on a bandsaw, the carving process begins. But all of the prettiest decoys I’ve ever made have been a result of what old Bob Ross would call a happy accident.

Do you use any power tools aside from the bandsaw?

I don’t. There isn’t anything wrong with power tools. But the best decoys ever made—here, or anywhere—were made with a pocket knife and a hatchet. If you’re running a grinder, you’re listening to a grinder and choking on sawdust. If you’re using hand tools, you’ve got sweet-smelling cedar chips falling at your feet, and you’re listening to George Jones.

You said something before about a decoy’s attitude. What is that, exactly?

Here’s an example. Ducks’ eyes are round, but it’s common to see antique Core Sound decoys with eyes carved in an ellipse, like a human eye. When you do that, it’s very easy to make a decoy look mean or pissed off. If you carve one that’s got pissed-off eyes, and his head sticks up at a bit of an angle with his bill kind of up in the air, he just looks like, “Hey man, you can go get screwed.” I don’t carve many decoys where the head is actually looking straight forward. There’s always a little bit of something going on to make them look like they’re busy.

When was the moment when you figured out that you could give a decoy personality through these small details?

I was in New Jersey hunting with my friend Jamie Hand. He looked at some of my decoys and said, “Man, these things are junk. You’re a talented guy, you can carve. Why are you making decoys that look like plastic decoys?” They had glass eyes, a lot of filler, feathers, wings, side pockets, and muscles. That day, he shifted my focus from realistic-looking decoys to traditional-looking decoys. After that trip, I came home and I went down east to try and find people who still made traditional decoys.

Did it take long to figure out how to give your carvings attitude?

It probably took me two or three years to come up with my own style. I only found one guy near my hometown who still made traditional decoys. He was almost 80, and he lived in a 1,500-square-foot house filled with thousands of Core Sound decoys. As long as I cut his grass, fixed his roof, or cleaned up for him, he was willing to share his knowledge. I looked at those decoys, and I took aspects of what I thought to be the best of them. Then I kind of added my own flavor.

So, you added personality by getting rid of things like carved feathers and glass eyes?

There’s a medium between carving lifelike decoys and carving cartoon-like decoys. I think that’s where I live. My decoys are not really caricatures of ducks, but they’re not anatomically correct either. They’re a rendering. I don’t use filler. I don’t do a whole lot of glass eyes or anything that has to be glued on. I want them to look just as good 100 years from now as they do when I make them. If you buy a decoy from me, I hope that when I’m dead, your great-grandchildren will be taking each other to court over who gets the Jerry Talton decoys.

Do you carve them from photographs, or are you just working off of memory?

Take a black duck for example. How many times on the water, when they’re swimming around, can you see that pretty blue speculum? Almost never. But when you kill one and you’re holding it, the first thing you do is spread that wing out, and say, “Oh, man.”

When I paint a decoy, I want to show that blue speculum even though I know damn well when that duck is swimming, I can’t see it. In fact, I’m not only going to paint it, I’m going to make it twice as big as it’s supposed to be, and I’m going to make it pointed on the ends like the devil himself put it on there.

Read Next: Great Old Gear: 14 Vintage Outdoor Tools That Have Stood the Test of Time

So what makes a hand-carved decoy look good?

Flow. Whatever makes a car pretty or a surfboard pretty, also makes a decoy pretty. It’s all about the curve and the relationship between the planes. You may not look at it and immediately say, “Oh wow, that duck’s really got some good flow,” but your mind’s eye is definitely enjoying it. When something is shaped right, you just know it’s shaped right. There’s no formula for good. Good’s just good because it’s good.