Fixed-Blade Broadheads Are Better than Mechanicals. And Here’s the Proof

It's an old debate: fixed-blade vs. mechanical broadheads. After extensive testing and years of bowhunting, the author is ready to put the question to rest. Fixed-blades are better. 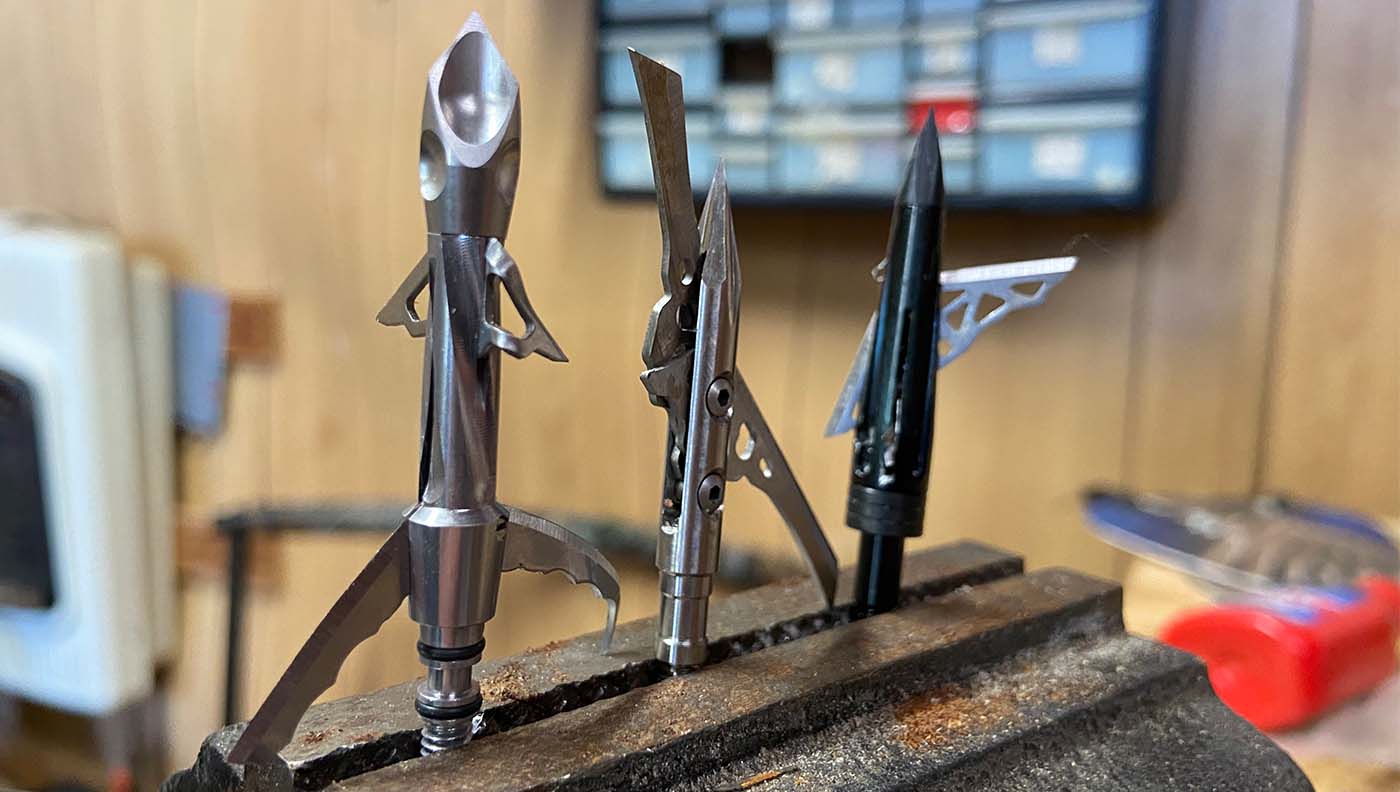 Three mechanical broadheads with their blades mangled after punching through cattle ribs. Will Brantley
SHARE

I’ve destroyed about $4,000 worth of new broadheads in the past two years in the course of our annual Broadhead Test. I’ve tested 33 different models—a mix of fixed-blade and mechanicals for both compounds and crossbows—for accuracy, consistency, sharpness, and durability. With the mechanicals, I’ve also tested for reliability. (You can read more about the test and see the full results for this year’s new crossbow heads here and compound heads here.)

For me, the best information from our tests isn’t necessarily the head-to-head comparisons of individual broadheads, but the bigger-picture takeaways I get at the end. And now, with two years of testing done, my biggest takeaway of all is that I’m doubling down on an opinion I’ve always had: Fixed-blade broadheads are just better than mechanicals.

So I’m not saying they don’t work, or even that they don’t work well. But I have seen them fail to perform as advertised. I’ve been on scores of industry hunts with other writers, not to mention hunts with local friends. I’ve spent several years working with a tracking dog. For the past few years, I’ve been a licensed outfitter. That all means I’ve followed a ton of blood trails from animals hit by other hunters. And without a doubt, I’ve seen more game hit and lost with mechanical broadheads than with fixed-blades.

And I’m not the only one who has seen this. Charles Hart, who runs Hart Farms Processing in Almo, Kentucky (and who donated the cattle ribs for this test), handles hundreds of hunter-killed whitetails every season.

“Most of the deer that come in have been killed with a rifle—and I cannot tell you how many mechanical broadheads we’ve pulled out of them,” he says. “These were deer that were shot with a bow and survived, to be later killed with a gun. We find anywhere from 10 to a dozen mechanicals every year, but only occasionally will we find a fixed head. Usually, if it is a fixed broadhead, it’s there because of a terrible shot. But we’ve found a lot of mechanicals stuck right in the shoulder. I didn’t start keeping them until a couple years ago, but now I’ve got a pretty good collection of them in the shop.”

Penetration Is the Key—and Are You Aiming in the Wrong Place?

But wait! This study showed that bowhunters using mechanical broadheads actually had higher recovery rates than hunters using fixed blades. Plus, look at the cutting diameters on those mechanicals, some will argue, and all the gory promo videos. You don’t see those giant holes from fixed-blades.

I’d counter at least some of that by saying a lot of bowhunters have been taught to aim at the wrong spot on deer. If you’re hitting the rib cage behind the shoulder crease, you’re getting the back of the lungs. Two inches behind that, and you’re in the liver. The anatomy does not lie. That whole “right behind the shoulder” area is easy to penetrate, and a hit there will kill deer. And in that area, yes, a mechanical’s larger cutting diameter provides an advantage (and a larger overall cutting surface, as found on a hybrid head with both fixed and mechanical blades, is a bigger advantage yet).

But the heaviest blood trails and quickest recoveries come from a hit through the front third of the lungs, near the heart. That’s where the circulatory system’s largest vessels converge. That area is between the shoulders and fortified by heavy muscle and some bone (though not as much as many believe). It’s farther forward than most bowhunters are comfortable aiming. But if you penetrate it with any broadhead, the blood trail will be profuse and short.

Penetrate is the keyword. It’s no problem for a good fixed-blade broadhead and moderately heavy arrow from my 60-pound, 28-inch bow. But that shot placement presents more challenges to most mechanical broadhead designs, and my testing has proven that to me, over and again. That said, it’s not the only reason I say fixed-blades are better. Here are three more.

The crux of the broadhead test is the cattle rib test, where I suspend fresh rib cages in front of a target and fire broadheads through them, one after another, until I’ve used up a package. Then I evaluate the results. The ribs allow me to measure cutting diameters, both on entry and exit. And they show how well blades and ferrules stand up to real flesh and heavy bone.

Broadheads that punch through, leaving behind clean cuts and shattered bone fragments in the center get my attention. If the holes they leave are big, that’s even better. And if the broadhead is still sharp and reusable at the end, well, that’s the trifecta of good performance.

Broadhead blades in general are not especially durable—and those of mechanical heads are the most fragile. When they hit a cattle rib, they almost always bend and sometimes break. To be fair, most of them still punch right through, but not always. Sometimes that damage slows them enough as to impede penetration, or result in small exit holes, with blades left behind in the ribs.

Only 40 percent of the broadheads I’ve tested in the past two years have survived the rib test completely unscathed—that’s including fixed blades. But only 9 percent of mechanicals have survived it. Looking at it another way, 75 percent of the mechanical broadheads I’ve tested have earned three or fewer stars in the durability category. Three stars mean the blades were bent and damaged, but the broadhead punched on through and still did its job, and could be repaired with new components. One star meant the broadhead was so damaged that its penetration and performance was affected—and that it’d need to be replaced altogether.

Shot placement trumps broadhead style. I would never argue otherwise. One of the main reasons hunters gravitate to mechanical broadheads is because they believe mechanicals fly better, and that’s generally true. In my testing, 20 of the broadheads evaluated have received a perfect five-star rating for accuracy—meaning they shot exactly like field points. Of those 20, 13 were mechanicals. Most of the mechanicals that didn’t get five stars got four, meaning they hit within an inch or two of the field points.

But there are exceptions. Two of last year’s lowest-scoring heads in the accuracy category were mechanicals. And there are some fixed-blades that flew just as well mechanicals, especially at compound-bow speeds. I start seeing the biggest flight differences with large fixed-blade heads—like this year’s Thunderhead 125s and TruGlo Titanium Quad Cutters—at 400 fps-plus crossbow speeds, especially at long range. On the other hand, I’ve found some of the more compact fixed-blade broadheads, like the Iron Will SX125 (a fixed crossbow head) and the Wasp Mortem, to produce some of the best flight of any broadheads I’ve tested.

If you’re dialing in your crossbow, especially, for 50-yard-and-beyond shots (and I know damn well that you are), you need to spend time checking and rechecking your zero with your broadheads. It just might be that a fixed-blade shoots better—and if it does, the other advantages it has make it the obvious choice.

Speaking of those Iron Will broadheads, they cost about $33 each. Dammit. But they also come with a lifetime warranty, and they’re pretty easy to resharpen. Most fixed blades have the same advantages; you can either resharpen them or at least replace the blades relatively easily.

You can replace the blades on mechanicals, too—but usually not without removing tiny set screws first, and holding the blades just right so that they realign properly. You might need to replace blade retainers, be they o-rings or collars, and perhaps even reset springs, plungers, and who knows what else. Some even require adjusting the mechanical blade tension with a hex wrench. And you might need to do all of that after just one practice shot into a target.

To me, it’s all a giant pain in the ass—one that prevents hunters from practicing with their mechanical broadheads. I know it has me. But during hunting season, when I’m practicing, it’s with my broadheads. And in the woods, I like to shoot stuff. Last year I killed five whitetails, two hogs, and a turkey. Had I been using the most expensive mechanicals of this year’s test for all of that and paying for them myself (yes, I get free product samples for testing), I’d have been out $160—or at least would’ve had to buy a bunch of replacement blades and components.

Suddenly, a $100 package of broadheads with a lifetime warranty that can be resharpened in the stand, if needed, doesn’t seem like such a bad deal. And three of the replaceable-blade Wasp Mortems, which did very well in my recent test, cost just $33.

All the more reason fixed-blade broadheads are just better.