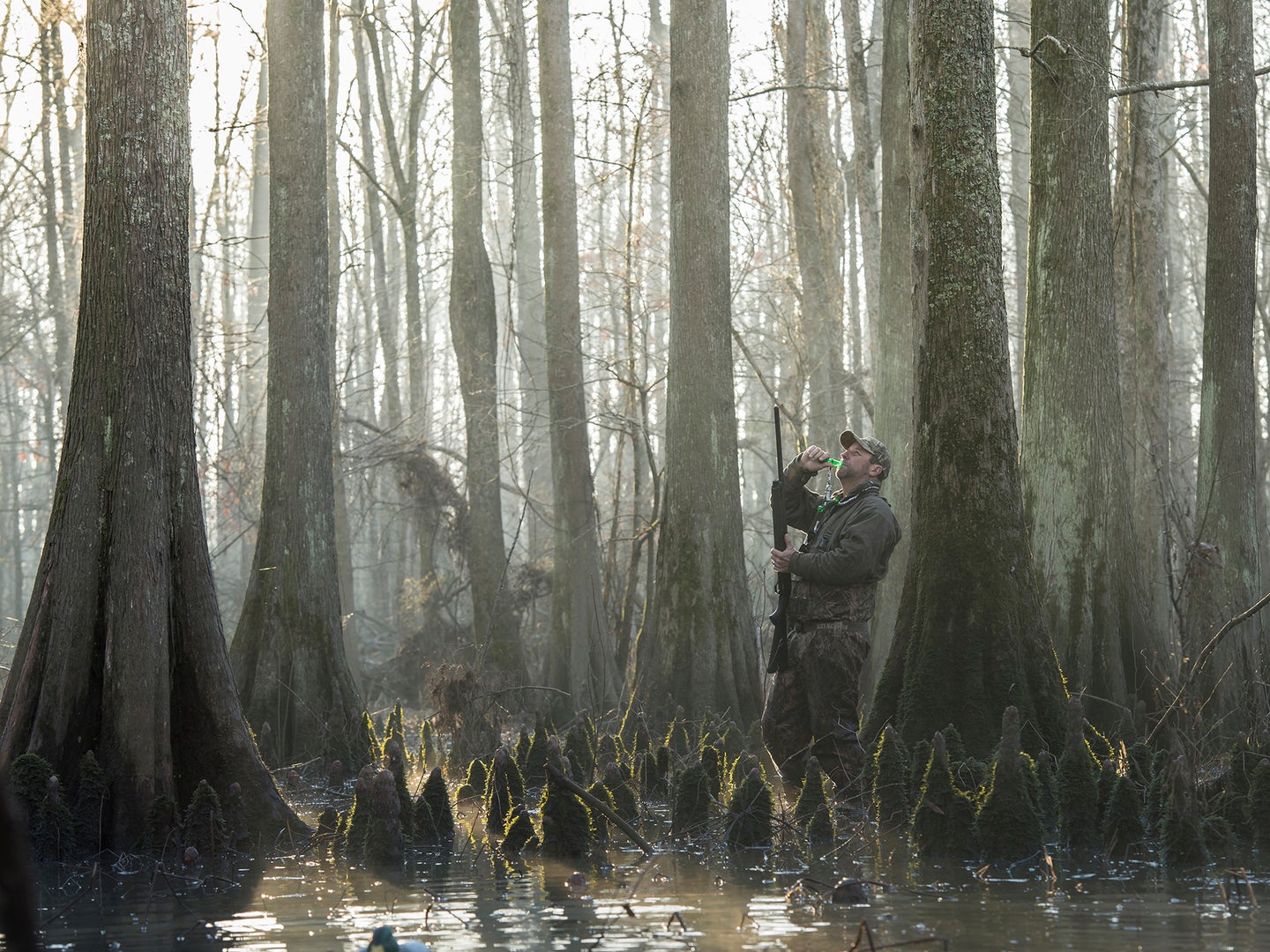 For Arkansas duck hunters, it doesn't get more classic that hunting in flooded timber. Bill Buckley

For Waterfowlers, Hunting Ducks In Flooded Arkansas Timber Is a Rite of Passage

The sight, and sound, of greenheads coming through the flooded-timber canopy is something to experience

WE WAIT with the old men, each of them rooted in the muck, worn and furrowed. In the early light, their limbs and branches overhead are kinked and storm-shattered, like the arthritic fingers of the ancients. We watch the sky together. With the first sound of wings, and shots booming in the distance, we lean into each other and wait. The water reaches only to my waist, but this is a full-immersion baptism into one of the great rites of winter.

For many duck hunters, timber hunting is the ne plus ultra of waterfowling. Wading deep into flooded woods, hunkering close to towering oaks and cypress and willows, ducks sucked into a woods hole where every bird with cupped wings is in range—such a scene is the dream of nearly every serious duck hunter.

And when it works—holy smokes, there is little to compare. The ducks whoof-whoof-whoof overhead, the hunters splash with their wader boots to simulate a feed in the timber hole. The dogs whine softly. The duck circle tightens. You press your face into the shadows of the Old Men and fight the fidgets as the flock takes a wider downwind swing. That’s a sign of something, but whether it augurs birds on the way out or ducks setting their sights for your timber hole, it’s hard to say. Until the greenheads bank hard, and you know this time they are coming.

A happy accident sowed the seeds for this tradition. In 1926, Verne Tindall built a 450-acre irrigation reservoir in the big Nuttall and willow oak woods on his Stuttgart, Arkansas, farm. It’s said that this was the first of the so-called greentree reservoirs constructed in the Mississippi Flyway, an area in which early-winter rains filled bottomland hardwoods with water that was reserved for nearby rice fields. But in the wet woods, ducks feasted on the acorn bonanza. Over the next two decades, levees wormed across untold thousands of hardwood bottomlands in the region, and the timber hunting boom was born. Rice and ducks, trees and water, farmers and hunters—they’re symbiotic relationships that gave rise to legendary gunning.

And they still do, although coming by a timber hunt is no easy feat. While there’s plenty of naturally flooded timber along sloughs and beaver swamps, it’s the man-made stuff that gets the attention. Unfortunately, much of the classic greentree timber is facing an uncertain future. Some of the best-known timber hunting stands in the world—Bayou Meto, Black River, Big Lake—have been weakened by decades of too much water held for too long. A new push from Arkansas officials aims to shorten flood times and boost the health of the 60,000 acres of public green timber, an effort that just might be enough to keep the Old Men standing for a few generations more.

Meanwhile, there are still plenty of places where the world seems to be half water, half wood, and filled to the brim with ducks. You may not be able to pony up for a slot at famed clubs like Six Shooter or Hatchie Coon or Fighting Bayou, but there’s public timber in the lower Mississippi Flyway.

Read Next: The Latest Digital Edition of F&S Has Arrived: The Classics Issue

And you can get a fair taste of shooting ducks in the woods far from the Stuttgart epicenter. Finding a piece of pocket timber along a low-grounds river or creek can take little more than time and sweat. You might not post up in a square mile of duck timber, but the approach is the same.

You walk in before daylight, set the decoys under a hole in the sky, and settle back. When the ducks come, you blast an eight-note highball through the branches. Stand in the shadows and press your face into the wizened coats of the Old Men. Follow the birds with your hat brim pushed low, until the whirling ducks above the trees float down through the branches, down into the hole, down into shotgun range, and you scarcely feel the thump of the gun for the thunder of your heart in the timber.