Fowl Play: How to Knock Down High Overhead Honkers

If you learn the trick to this shot, you can take good, ethical shots at geese (and ducks) that won’t decoy 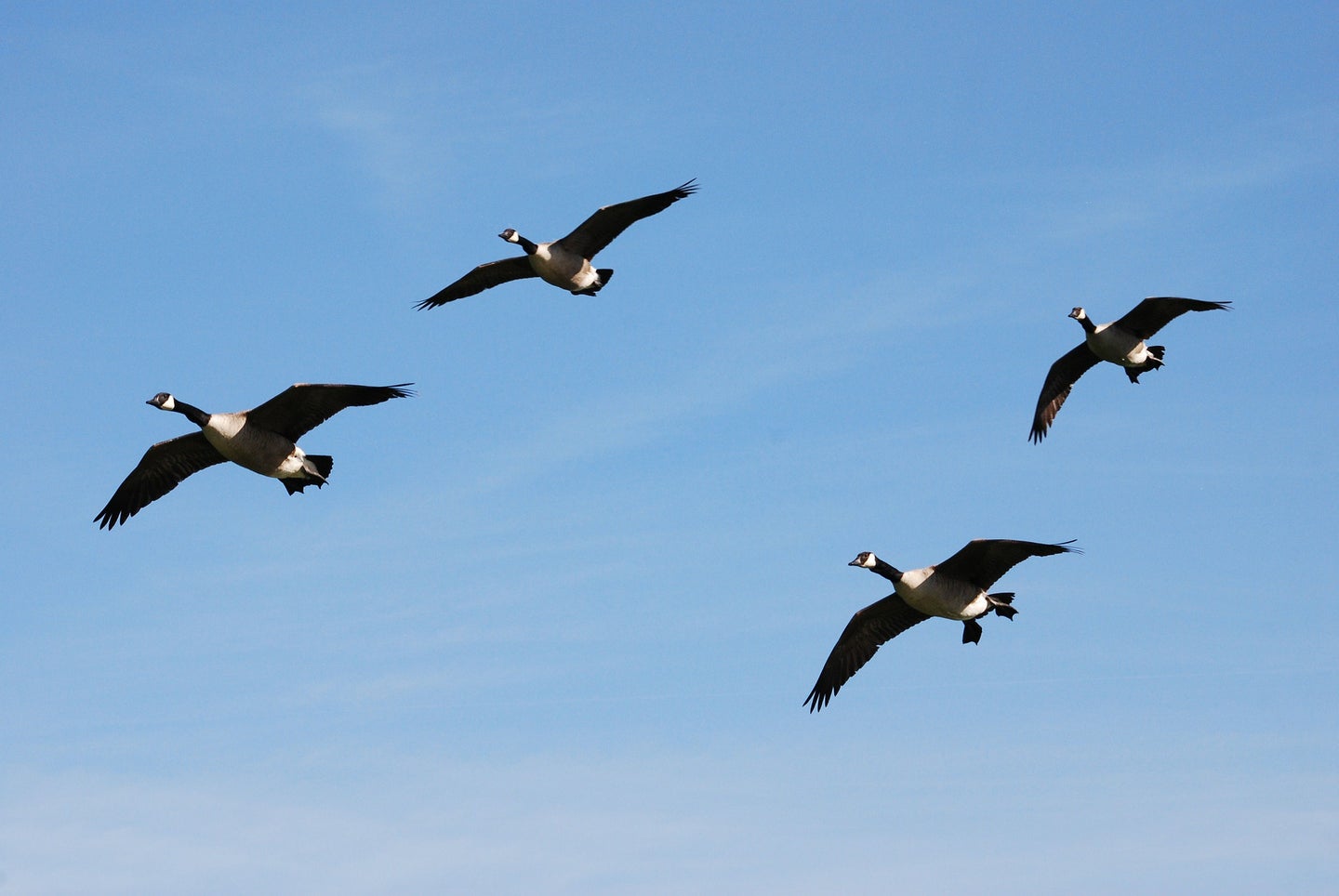 I heard the geese coming before I saw them. The flock cleared tall white pine windbreak on their way out for an afternoon feed somewhere to the west. Having watched them fly this same pattern for days I had come prepared with a few goose loads in my pocket just in case. I pulled a steel pheasant load out of the chamber and dropped in a magnum load of BBs.

The geese caught me near the bottom of the hill, making the distance from me to the top of the trees a good 45 yards or more. Picking one bird from the flock and reminding myself to move the gun slowly, I swung and shot. The goose fell a long way straight down, landing with a thump in the stubble. Jed, my German shorthair, was still a puppy. He ran to the goose, picked it up for an instant, then decided retrieving ten pound birds wasn’t in his job description and dropped it. The honker did make for a heavy game bag, too, as we resumed our pheasant hunt.

Chances to make the high overhead shot occur all the time, and not just for opportunistic pheasant hunters. We site duck blinds where birds travel, and in the course of a hunt it’s common to have ducks or geese fly over the top, either on their way somewhere, or lifting up over the decoys. It can be a long shot, and plenty of hunters struggle with it. The good news is, the birds expose all their vital areas when they are overhead, and if you learn the trick to the high overhead shot, you can take good, ethical shots at birds that won’t decoy.

How to Make the High Overhead Shot

If you can stand and make free use of your feet (always a big if in waterfowling) you can make the overhead shot easier on yourself. If you’re right handed, keep your weight on your back foot for birds straight overhead and to the right. For birds passing high overhead to your left, put your weight on your front foot. Try that right now with an imaginary gun, and you’ll feel what I’m talking about.

The real trick to making the overhead shot lies in slowing down. The tendency is to take a big, fast swing at the bird, pull the barrel out to a dump-truck length lead and shoot. I am here to tell you that doesn’t work. Ever. Instead, move the gun about half as fast as you think you should. Slow way down. Then slow down some more.

I’ll start behind an overhead duck or goose and swing through it to be sure the gun is moving on the bird’s flight line, because being on the right line is just as important as getting the right lead. Moving the gun just fast enough to pass the beak, I shoot when it feels right. I am always surprised at how little apparent lead I need (everyone sees lead differently, so your mileage may vary) on long shots, but it makes sense when you remember that only a small movement at the muzzle translates into much more at long range. Move the gun slowly, swing through to stay on the target’s line, and you’ll have much better odds of pulling off the long shot.

Although I would rather shoot a bird over decoys than overhead, sometimes you have to take the shots the birds give you. Think about where the bird will fall and how easy or difficult it will be to recover and practice your range estimation, too. If you think a bird might be too high to shoot at responsibly, it probably is.

A reader told me recently that he and his friends take two guns apiece to their blind: a 12 with an open choke for shots over decoys and a tightly choked 10 gauge for the birds that pass overhead. While I applaud that kind of over-thinking, I don’t believe it’s necessary. If I were shooting smaller shot for birds over decoys, I might bring a box of 3 ½-inch BXD BBs for geese for the overhead shots and take advantage of the Maxus II’s magazine cutoff to make a quick switch. It’s effective to 50 yards, which is a long way straight up.