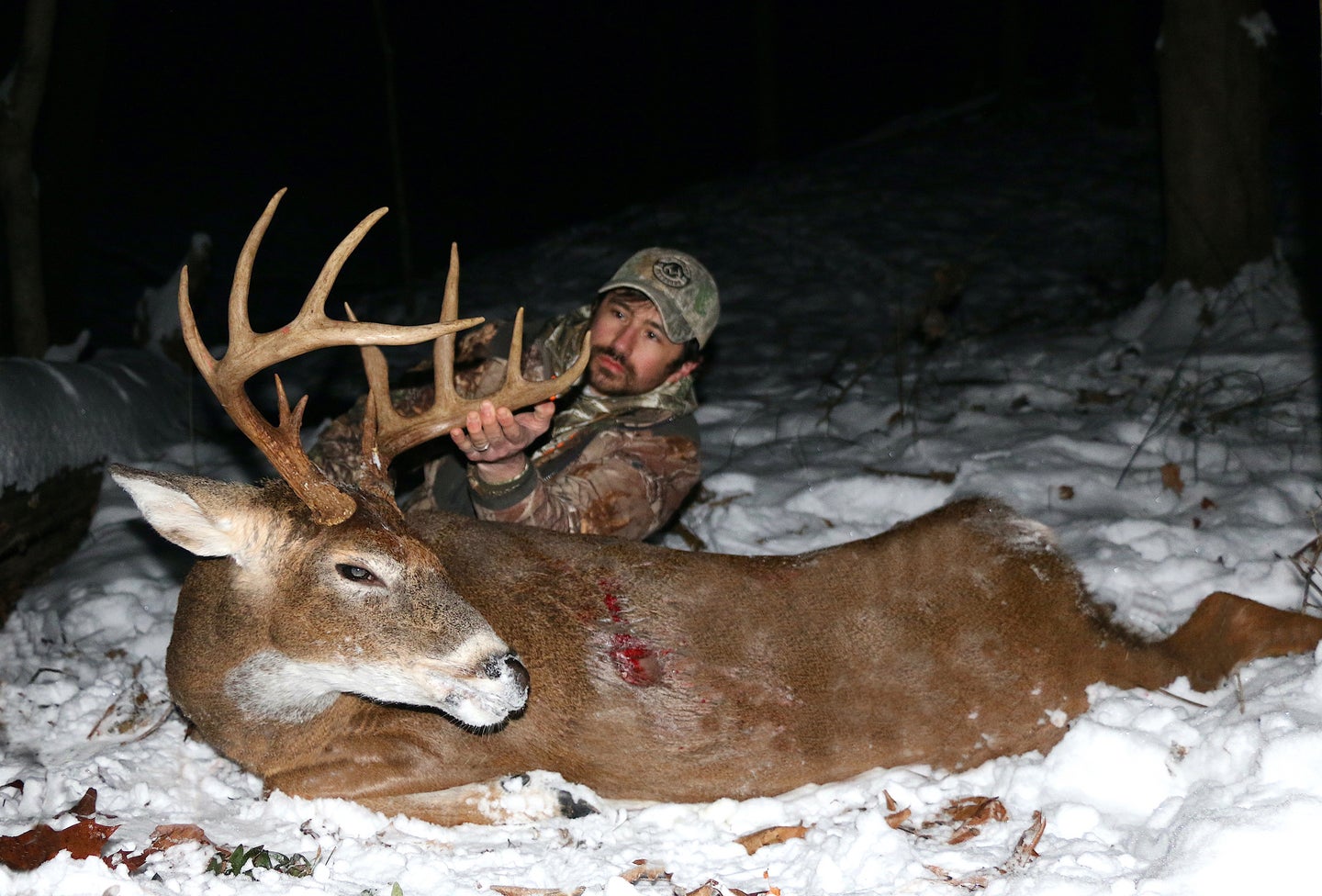 The author poses with an Ohio buck he tagged in January of 2022. It wasn’t reaching his stand during the day until he pushed closer to bedding cover. Honeycutt Creative Photos
SHARE

That gnarly old buck just lays there, chewing his cud and wasting the day. Then, about 20 minutes after nightfall, he rises, stretches, and departs for distant fields. As a result, this buck is never seen during daylight by man or camera, qualifying it as a true nocturnal buck.

Deer hunters seem to have it in their heads that this is what some mature bucks do. Naturally, everyone has that hunting buddy or friend who says, “Yeah, I’ve got this big buck on camera, but never in daylight. Must be nocturnal.”

Rarely, if ever, are bucks truly nocturnal—though they might seem to be. We spoke with Kip Adams, biologist and chief conservation officer for the National Deer Association to figure out where seemingly nocturnal bucks go during the day. According to Adams, if you only see a buck after dark and before daylight, it’s usually because of one of these seven likely reasons.

1) Your stand is too far from bedding cover.

The main reason hunters don’t see deer during the daylight is because they’re sitting too far from bedding cover. The deer get up and move around, but they don’t make it to the hunter before nightfall—or they’re already gone from the area by dawn.

Inch closer to where your target buck is bedding. If you have trail camera photos close to dawn or dusk, pay attention to the first and last photos in the sequence. In the evening, the orientation of that first photo can sometimes reveal where a deer came from. In the early morning, the last photo can point where it’s going. Either scenario can signal the direction of a bedding area.

2) The buck you’re after has a small core area.

If you’re relatively close to where a buck beds and you still aren’t seeing him during the day, he may have a very small core area. A buck like that doesn’t travel very far, except during the rut, because he has everything he needs. Small-core-area behavior is more common in areas with good habitat. “If there’s food and cover close by, some bucks just don’t move far at all,” says Adams.

This is a good problem to have. It means there’s less of a chance that another hunter will get a shot at the deer you’re after. Consider pushing deeper into the core area and setting up between the buck’s bedding cover and food.

3) Your stand is away from a buck’s preferred travel routes.

Deer don’t always use the same travel routes. They have different trails they follow depending on different conditions. If the intel you’ve gathered on a buck focuses on an area that it doesn’t frequently use, you could be wasting your time while it’s traveling during the day nearby.

Figuring out which travel routes bucks use, and setting up accordingly, is part of patterning deer. “The buck you’re after is likely on his feet somewhere,” Adams says. “It’s just a matter of figuring out what cover he’s using and when he’s leaving.”

If you have a neighbor with a property that’s optimized for bedding, that’s where mature bucks likely spend their daylight hours. If your property doesn’t offer something better, or at least equivalent, it’s time to get to work.

Enhance your property with more bedding cover. Hinge-cut trees and clear land for early successional habitat (young trees and brush) to grow. “Enhancing habitat takes time,” says Adams. “But if you want to hold more bucks during the day, you need to encourage them to bed closer to where you have a chance for a shot.”

5) You’re applying too much pressure.

Hunting pressure undoubtedly makes deer think twice about moving. While some deer are willing to travel during the day even after being pressured, most aren’t.

“Look at unhunted deer populations,” Adams says. “Those deer move all day long. It isn’t that hunted deer are different animals, they’re just reacting to the pressure we apply.” If you’re only seeing deer on camera at night, apply less pressure to the area you’re hunting.

6) You don’t know a deer’s personality.

According to Adams, and other experts, deer express personality through their behavior. “Some just tend to move a lot more than others,” he says. “Some deer might move more within a small home range, while others may have bigger home ranges, but tend to not move as much. Every deer is different.”

Recognize deer for who they are, and respond accordingly. If a deer tends to move more during the day, consider being more passive in your approach. If he moves less, dive deeper into cover closer to his bedding area.

Read Next: 4 Things Your Trail Cams Aren’t Telling You

7) He barely moves from his bed during the day.

Very few, if any, bucks are truly nocturnal. In the worst scenarios, bucks might only move 50 to 75 yards during the day leading many hunters to think these deer only come out at night.

If you’re dealing with a buck like this, it requires a seriously aggressive play. You need to hunt the edge of his bedding area, or even infiltrate just inside of it, to get a shot. Push closer to his bed, and you’ll increase the odds of a shot opportunity.