Fowl Play: How to Hit the Long Crosser

A duck cruising the far edge of the decoys is one of the toughest shots for most hunters to make. Unless you know this mind trick 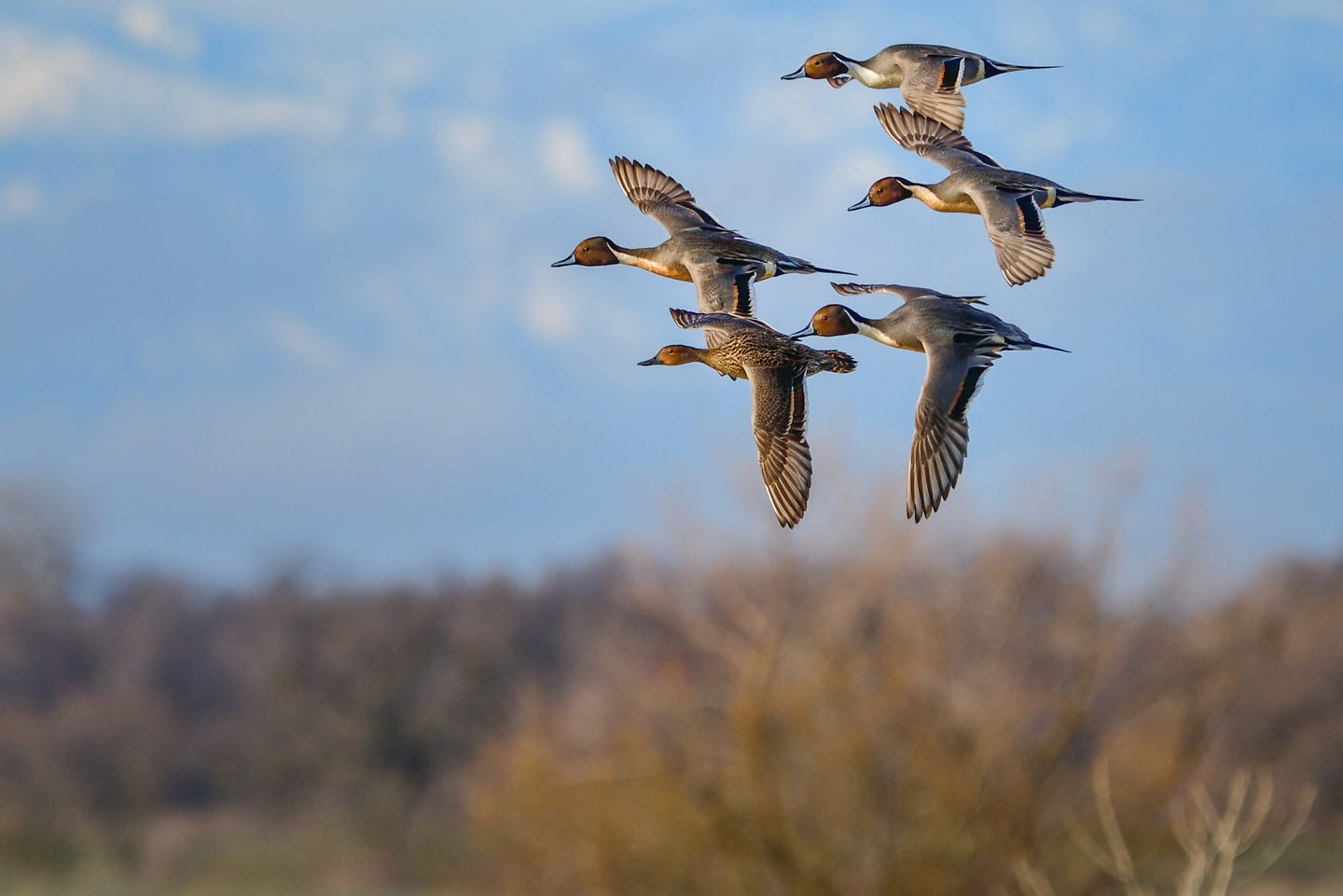 On my first and only duck hunt to California, I imagined that each morning I would do what the locals do: shoot the one pintail the law allows right away, then complain for the rest of the day about all the bull sprigs pouring into the decoys.

It seemed a reasonable expectation, as we were guests at one of the state’s poshest private camps. (“You can’t miss it,” said the person giving us directions. “It looks like a Cabela’s.”) The place was sited on thousands of acres of carefully tended wetlands and full of ducks. But, money can’t make the wind blow or the sun shine, and the pintails lived up to their reputation as being standoffish and moody on cloudy days.

We saw ducks by the thousands for the whole trip, and they all acted as if there were an invisible, 40-yard barrier around the blinds, dropping in for a look at the decoys from a safe distance and moving on. When one made its pass a little bit closer than all the rest had, I stood up, shot, and watched the bird go loose in the air. I then spent the next half hour looking for it, finally finding it where it had fallen dead into the roots of a walnut tree on the levee.

The long crosser at a sprig—or any other duck—cruising the far edge of the decoys is one of the toughest shots for most hunters to make. I’d much prefer to pass on it and shoot my birds over decoys, but sometimes you have to make that shot or go hungry. That rice-fattened pintail turned out to be the best whole roast duck ever, so I am very glad I knew how to hit it.

How to Shoot a Sprig Skitting the Spread

Most hunters are pretty good shots out to 30 yards, but as distances stretch, they struggle. At longer ranges, you can’t look down the rib at the bird anymore. You have to learn to focus on the target and let the gun become a blur somewhere out in front of it.

In terms of technique, what works best for me is combining the swing and the mount, so the muzzle stays below the bird as it passes underneath, and when the gun comes to my shoulder, it’s already ahead of the bird. As you make that move, match the gun speed with the speed of the target all the way through the shot. A lot of people—including me back when I couldn’t hit crossing ducks—try to get their lead by giving the gun a big push at the end of the shot. This doesn’t work consistently. Keep the speed the same throughout.

Fix your focus onto the bird’s bill and let the gun drift out into your peripheral vision. It should be as blurred as the target is sharp. Resist the urge to measure lead. As soon as you do, the gun slows or stops. Instead, remember you’ve got a 30-inch wide pattern to give you margin for errors in lead. Realize lead doesn’t have to be precise, trust your subconscious to figure out how far ahead you should be, and shoot when it feels right.

All of this is much easier to do if you have spent the summer visiting the skeet field and shooting the crossing targets at 3, 4, and 5. The more you practice this shot, the more comfortable you will become in letting the gun go where it needs to go on its own.

Some people believe faster ammunition helps on crossing shots by cutting down the amount of lead you need to give the target. It does, but only by a few inches at 40 yards, while most birds are missed by feet because hunters measured lead and stopped their swing. There’s not a big difference in retained energy at longer ranges either, as the faster you launch pellets, the faster they slow down. Slower loads, on the other hand, contain more shot, and they often pattern tighter. I’d stick with the 1 ¼-ounce, 1450-fps BXD load of 2 shot and count on its tight-patterning wad to help me put the most pellets possible on target.