How to Use Trail Cameras to Tag More Turkeys

The same cameras you use for deer hunting can not only get you on a gobbler, but also help you put a tag on that tom. Here are 5 killer tips 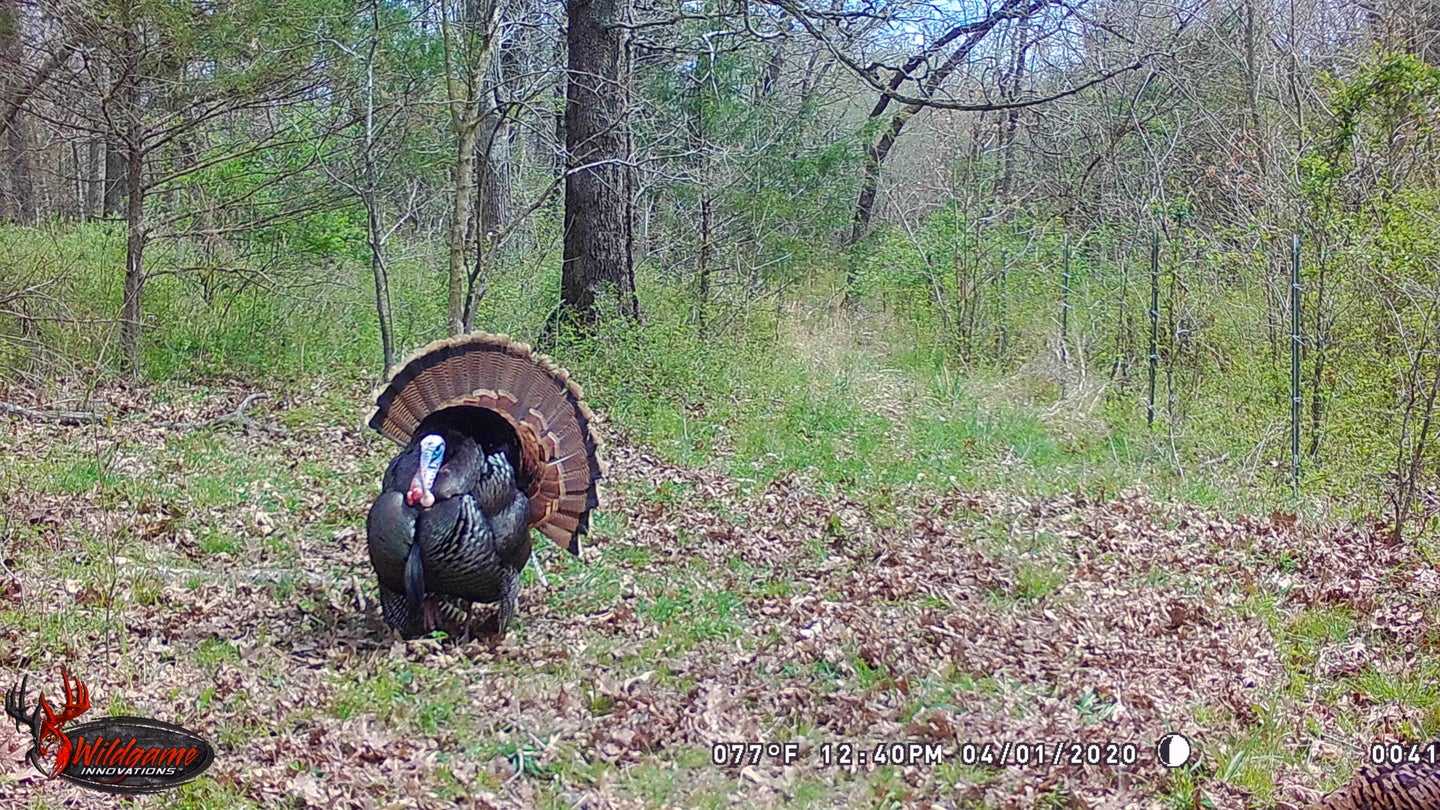 With turkey seasons open, or soon to open, you know you should be out there listening and scouting to stay on top of gobbler activity. But who has time to get as often as we should? That’s where your trail cameras come in. While many whitetail nuts live and die by the intel provided by trail cams, very few turkey addicts use them, and that’s a big mistake.

Turkeys can be highly predictable, especially at or near their favorite roosts and feeding sites, and gobblers will patiently wait in strutting areas where they’ve attracted hens before. Properly placed trail cams can reveal these turkey spots and help you pin down when individual toms are most active and how they behave—all of which can take your hunting to another level.

So, let’s get going. Here are five tips for scouting turkeys with trail cameras.

1. Start by setting your trail cameras to Field Scan mode for turkeys.

If you’re just learning a property or having trouble nailing down exactly how turkeys use an area, forget trying to capture up-close action at first. Instead, set your cameras to “field scan” or “time lapse” mode (most camera brands have this feature). Field scan simply takes a pic at a predetermined interval (which you can set), whether it detects game or not.

As the name implies, this allows you to scan an entire field rather than just the area covered by the camera’s motion sensor. You’ll get pics of a feeding flock, for example, at 50, 100, or 200 yards away. If you see birds repeating that behavior over multiple days, you can then move your camera closer to their path and refine your intel.

2. Once you’ve refined your search for turkeys, switch your trail cameras to video mode.

Many deer hunters are hesitant to use video mode for their trail cams, for understandable reasons. Deer cams are often on the landscape for many weeks in cold weather, and shooting video can run down expensive batteries (not to mention eating up valuable space on an SD card). But since your turkey cams will be out for only a few weeks, and the temps will be (hopefully) warmer, going video makes perfect sense.

The problem with still pics is they capture only a snapshot of the action when they’re triggered. For example, if a couple of hens are leading three strutters, you might only get pics of one or two toms. If they’re clumped together and rush by when the camera is still in recovery mode, you could miss them altogether.. Video gets an entire 20- or 30-second clip, which captures much more, including how the gobblers act with each other. If there’s a dominant bird, he might show his stuff. Video also captures movement; if birds are moving in a certain direction, a half-minute of footage will give you a much better idea of not only where birds are heading, but where they’ve been.

Now that you know the field-scan and video tricks, you need to know where to place your cameras. Start with food sources. Gobblers don’t care much about eating now, but the hens they are after do. If food isn’t present, they’re not going to waste their time in given area, and that means you’ll have a hard time calling a gobbler to that spot.

Keeping up with what turkeys are eating can be a scramble, because these birds eat just about anything. Rather than trying to chase the favorite food of the moment, set your cams up on three main staples of the turkey diet. Mast is always a safe bet, and while the nut drop from last fall is far in the rearview, turkeys are experts at cleaning up any remaining acorns, and to a lesser extent hickory and beech nuts. Look for fresh scratchings and set up cams in video mode to learn when birds are visiting. Waste grain in any farm field is a huge draw for early spring turkeys, especially if those fields have been covered in deep snow all winter, and these are perfect spots to set a cam on field scan mode.

Finally, put cameras in field scan overlooking the season’s first green fields (alfalfa and clover), as turkeys are as hungry for green food now as any wildlife species. The added bonus of green fields is that usually host the spring’s first insects, which are a huge turkey staple.

4. Use trail cameras to nail down turkey roost sites.

The surest way to kill a gobbler off the roost is to know which direction he is going to head after flydown. If you already know the location of a good roosting site, a trail camera can tell you the rest.

Focus on mature trees by species. Eastern turkeys near my home love to roost in mature red oaks, while Merriams I’ve hunted are attached to towering pines, and the Rios I chase seem to select huge cottonwoods. In hilly terrain, I’ve found that birds prefer roosting on a south- or east-facing slope; this allows them to wake up to the sun’s first warming rays, an important consideration on the often-cold temps of early spring. Regardless of species, birds almost always have an open area nearby they can pitch down to; this insures that they won’t land in a spot where predators lurk. And this is a good place to plant a camera, and set in on video mode to catch direction of travel.

If you’ve got wireless cams in your arsenal, this is a great place to use them. For starters, they give you instant feedback on whether you’ve picked the right spot for your camera; if you’re not getting pics within the first few days, it’s time to tweak the camera location. Maybe most important, a wireless cam keeps you from intruding on a sensitive area to pull a card.

5. Study your trail-cam pics and photos to take a tom’s temperature.

Now, if you’ve got your cameras in the right places, and on the right modes, you’re going to get lots of pictures and footage. And if you look at it closely, it will tell you more than just where turkeys are active. It will help you lure in your next tom.

How toms react to your calling isn’t always about their desire to find a hen. They all want to be with hens. The critical question is, how badly do they want to fight off other gobblers for the right to that honor? Gobbler groups establish a pecking order that can remain through late May. Your ability to identify and respond to that dominance hierarchy can be critical, and your camera’s pics and video will reveal that.

Many flocks have a boss bird that rarely gets challenged. Watch for a tom that struts no matter the situation, or seems to roam among other turkeys without ever being challenged. This is your bird to call to aggressively, or use a strutter deke, to lure into range. Another factor to consider are “buddy birds”—two to four gobblers or jakes of similar age and size who always seem to run together. These bachelor groups can intimidate even the most bad-ass tom on the block, and aggressive tactics can work well here, too. By the same token, there are gobblers, sometimes really big ones, that are shy and don’t like to fight and rarely strut. If your cameras tell you that a certain bird sticks to himself, doesn’t strut much, and never mixes it up with other toms, you’ll want to finesse that tom instead of challenge him.