Montana Merriam’s Turkey Adventure: Gobblers Out of the Gate 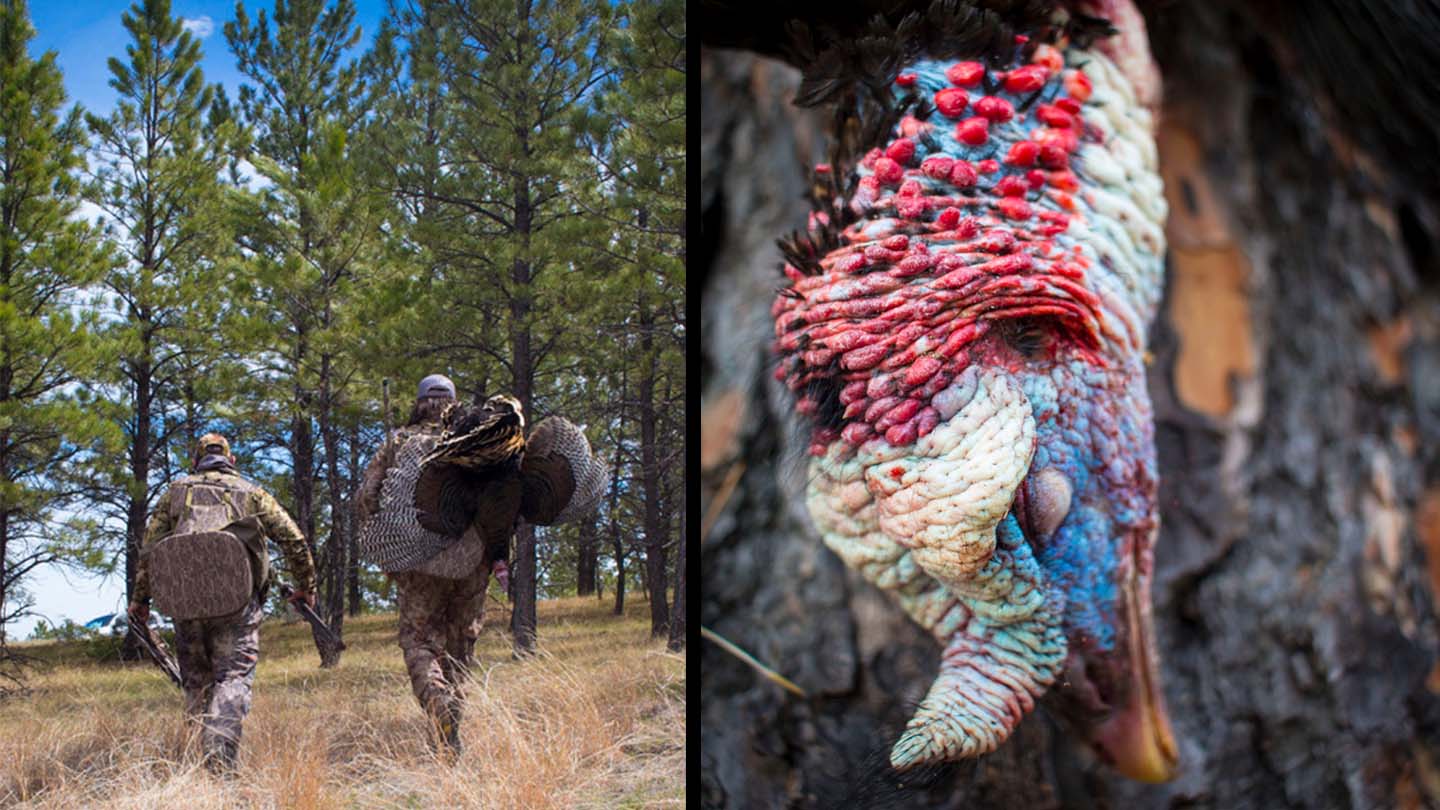 On the eve of our Montana turkey hunt, before heading to bed at the lodge, the last order of business is to determine hunting partners and pick spots for the morning. I learn that my hunting buddy for the week is Matt Rice from Vista Outdoors and our guide is Terry Honkanen, a seasoned turkey expert. Then, one of the other guides, Chris, who goes by Dalley, throws a deck of cards on the table.

The guides had discovered a piece of property loaded with gobblers the morning before. To iron out who gets first dibs on the hotspot, we draw cards. After some debate about shuffling, Dalley puts the cards on the table and mixes them all up—just like how a kid would shuffle a deck. Each of the hunters pulls a card from the mosh pit, and my ace combined with Matt’s seven of spades takes the win. Matt looks at me and says, “you’re up first tomorrow.”

How to Put a Gobbler In Your Lap

We roll down the driveway of Trophy West Outfitters in pitch dark and drive 40 miles to the property that everyone was crowing about last night. As Matt opens a wire fence, I catch a glimpse of elk skirting across a bottom to flee the lights of the truck. They disappear over the next timbered ridge as if Eastern Montana’s sprawling landscape just swallowed them whole. We kill the lights and ease down a dirt road. A few mule deer explode out of a small thicket, like a pheasant flushing. I watch their silhouettes fade in the morning light as they stot off. The area feels alive with wildlife, but the windy morning has us worried about silent toms.

Setting high expectations for a hunting spot has its downsides. I expect gobbles all around as we step out of the truck to listen, and the initial silence—save for the constant whoosh sweeping over across the prairie and through the scattered pines—has me instantly, and unreasonably, down on our prospects.

It doesn’t faze Terry in the least.  “We’ll find one,” he says. “I’m going to put him right in your lap.” On the ride over, Terry only stopped telling hunting stories long enough to give us what he calls “a free concert” when Lynyrd Skynyrd played on the radio. The guy exudes confidence, but in an easy-going, upbeat sort of way. I’ve known him for less than 24 hours, but I’m already pretty sure that he doesn’t get down on any prospects, turkey hunting or otherwise.

Terry decides we should set up in an open meadow that he knows birds like to work through. We hunker in some brush and wait. When Terry hits his box call, a faint gobble registers in the distance. The next time the bird answers Terry, he’s closer by half, and we all scramble to get ready. Through the pines, at 75 yards, I see him in full strut, and still coming.

The decoy is 25 yards out, and just behind it is a small drainage with pines and brush. It wraps around to our right and leads to a big opening—a perfect place for the tom to cross. When the bird stops at 60 yards and gobbles behind some big trees, I reposition myself for a more comfortable shot. Once I get set, the gobbler drops into the drainage and does the exact opposite of what we expected. As soon as he is out of sight, I move my entire body again to reposition a second time.

The white tips of his fan are the first things I see as he comes over the rise, then his beet-red head. As the bird spots the decoy, I am staring down the barrel of a CZ Reaper Magnum over/under at a gorgeous Montana Merriam’s at 35 yards. I switch from the lower barrel with a modified choke to the upper barrel with a full choke and slide the safety off.

I wait for the tom to come out of full strut, and he drops at the sound of the shot. Some people will tell you that it’s bittersweet to tag out in the first two hours of a hunt, but in the moment, at least, it’s just sweet. “Sure enough,” I say to Terry. “You put him right in my lap.” He nods in a way that tells me this wasn’t the first time he’s delivered on that promise.

How to Fan Turkeys Super-Close

We’re back the following day at the same spot, and it’s Matt’s turn. As we pull up to the gate, I offer to jump out and open the fence. I release the tension of the wire and let the truck get past before reclosing the gate. As I lock it back into place, I start to hear hysterical laughter from the open windows of the truck, and I look up to see that I’ve locked myself on the wrong side of the fence. I have never felt more like an easterner in my life.

Naturally, the guys give me a hard time back in the truck and go on to tell stories about other idiots who’ve closed the fence on the wrong side before. Matt howled about one guy he hunted with who actually did it twice.

“If you lock yourself on the wrong side again, we’re driving away,” Terry warned.

This morning is pretty much the opposite of the previous day; the birds are gobbling their heads off. We get on a few, but I guess the live hens are a tiny bit more enticing than even Terry’s calls. We spend most of the day running and gunning with not much to show for it.

Late in the morning, we strike a group of birds, and Terry decides to get real aggressive with them. We hike a big loop around to get in a better position and use the rolling terrain as cover to move within 100 yards. The birds gobble constantly the whole time.

We set up just behind a rise, and Terry starts in with sharp clucks and cutts. Almost instantly, four jakes appear out of a thicket, gobbling, and catch a glimpse of Terry holding a fan in the air, slowly twisting it back and forth. As I peek over the rise, I see the jakes on a mad dash for us. Matt wants to hold off for a tom, so we have some fun as the fired-up birds come to 8 yards acting all tough.

With that, we decide to change gears and head over to a new property to see if we can find some fresh birds for Matt. Within seconds of stepping out of the truck, a group of gobblers sound off to an overhead crow.

We slip into the timber, and it’s not long before Terry hits the deck and throws the fan up, working it slowly back and forth. “There’s a gobbler right here,” he whispers. “OK, he went into full strut. We’re good.”

Two jakes and a tom charge in, swinging their snoods and gobbling like crazy. There’s no time to take cover before the three birds are in the open at 20 yards. The only problem is that the birds are walking side-by-side, bumping into each other and not offering a clean shot. They do circles around a tree in full strut, not leaving each other’s sides, and the turkey merry-go-round lasts minutes before Matt finally gets his opportunity and doesn’t miss. It’s two birds in two days for the ace high and seven of spades.

We load up the truck and make our way out to meet the group back at the lodge. We’re all feeling good, and I eagerly hop out to open and close the last gate of the trip. It’s the only fence with a quick-release, which makes the job easy. I throw down the latch to the sound of all-too-familiar laughter. As I shut my eyes in disbelief, I know that I just locked myself on the wrong side of the gate—again.

I turn around to see the truck rolling down the highway…until finally I see the brake lights flick on as Terry decides it’s time to turn back and get me. I am standing there like a kid who knows he is about to get in trouble, and there is no way out. Matt and Terry are in hysterics again and all I can do is accept it. Fair enough. I’m now that guy—the guy who locked himself on the wrong side of the gate, twice. And I have some new hunting buddies who can’t wait to tell you all about it.

I used a bunch of new products on my hunt in Montana. Here are the five that stood out to me.

The over/under CZ Reaper Magnum is designed for the turkey woods. The most significant benefit of this gun is the ability to have two barrels with different chokes. This allows you to prepare for a shot at two different ranges. I had my bottom barrel sighted for 25 yards with a modified choke, and my over barrel sighted in at 40 yards with a full choke. When the tom stepped out at 35 yards, I switched to the over barrel and smoked him. A luxury that you don’t get with a single-barrel turkey gun. The 26” barrel also makes moving through the woods easy, and the already assembled railing makes mounting optics a breeze.

It was a pleasure to wear this vest around the hills of Montana for a few days. There are pockets everywhere for the turkey hunter with more calls and gear than he needs—which is most turkey hunters. The oversized seat with an easy release magnet makes for comfortable setups and quick mobility when hiking. The horizontal pad on the upper back may be my favorite feature as it allows for maximum comfort when leaning up against a tree. They thought of everything when designing this vest.

I’ve never hunted with a red dot before this trip, and I may never chase turkeys again without one. The Bushnell RXS-250 is built with durable housing and a bright, clear red dot to make zeroing in on your target as easy as possible. The estimated battery life is 5+ years or up to 50,000 hours. It can be easily adjusted for windage and elevation so you’re dead on when the time comes to make the shot.

Hunting turkeys in open country was a whole new ballgame for me. One of my biggest struggles was my perception of distance. Coming from the east, I’m used to seeing game in tight and up close. But in the rolling hills of Eastern Montana, a gobbler may appear further than you think. The Bushnell 850 laser rangefinder is 2X brighter with a 50% larger objective lens. It’s arc technology accounts for terrain angle, giving you true distance to target on uphill and downhill shots.

Hunting turkeys in open country means putting miles on your boots and keeping up with gobbling birds. Having a comfortable and light gun sling is crucial when covering big tracks of land. The Butler Creek Featherlight sling has a soft shoulder foam pad for comfort and can easily be adjusted. It is lightweight, breathable, and secure to make sure you are comfortable and ready to go in the field.