What’s Better For Squirrel Hunting, a Shotgun or a .22 Rifle? 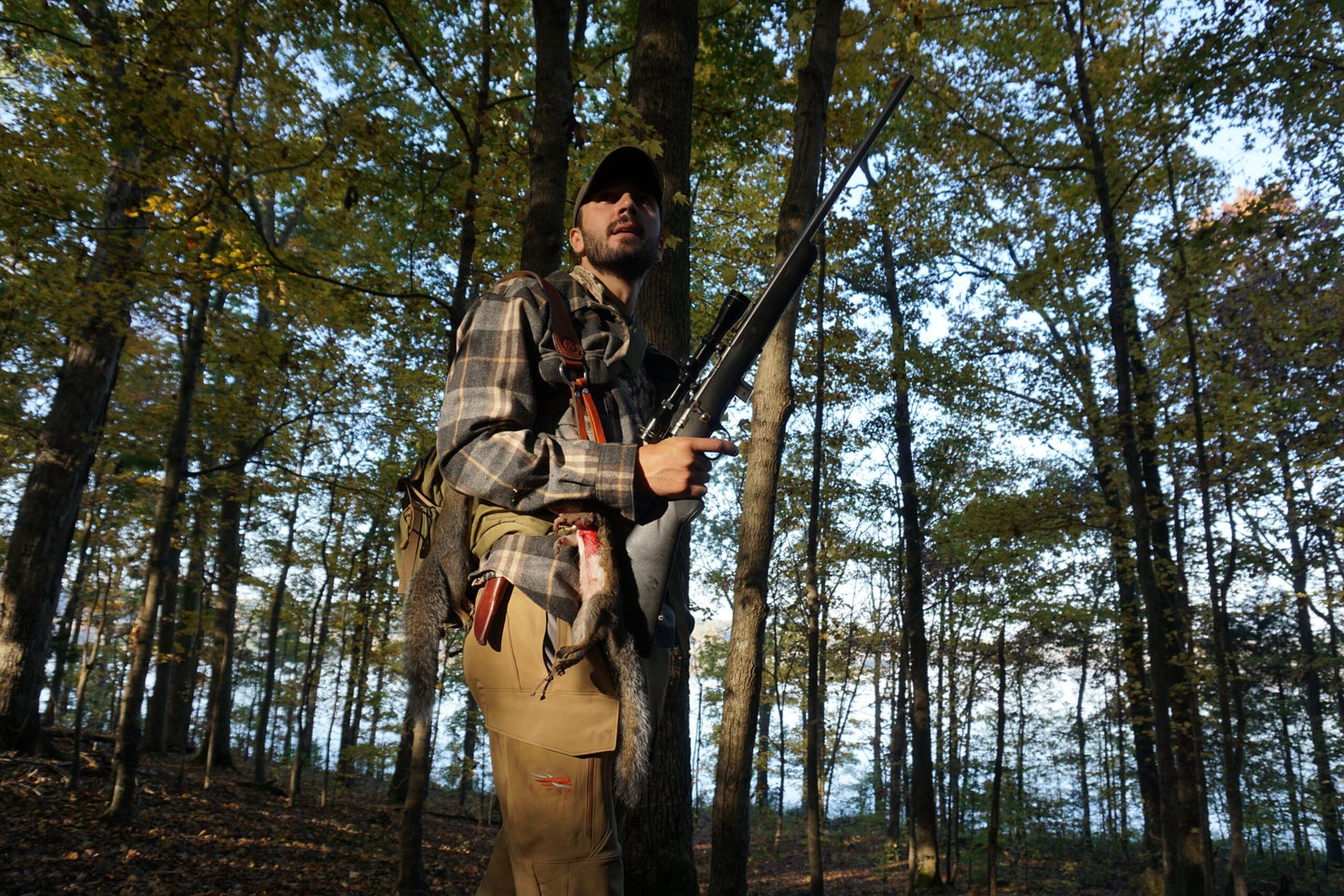 When hunting squirrels with a .22, you need to pick your shots carefully. Eva Green
SHARE

It’s a debate as old as the hills: A shotgun versus the .22LR for squirrel hunting.  Both guns have their camps, their own followings, and both shine in different squirrel-hunting situations—or so I’d like to believe.

We won’t dilly-dally here but get right into the discussion. First, though, I’d like to say that while I’m no PhD-packing expert in bushytail behavior, I have been an active squirrel hunter since 1972, and have bagged hundreds of the little rodents, including what I call the Trifecta—fox squirrel, grey squirrel, and black—all in one morning, and all with a .32 Pedersoli muzzleloading long rifle.

But enough about me. We’re here to talk about the ethics, challenges, and merits of shotguns and .22s for squirrel hunting and finally figure out which one is better—or at least best for you.

The Argument For Why a Shotgun is Better Than a .22 for Hunting Squirrels

I started hunting bushytails at the age of 8 with my father, Mick—a squirrel hunting fanatic. Squirrel hunting, my dad always said, will teach you everything you need to know about hunting everything else, be it whitetails, elk, or wild turkeys.

As a young man, I tried a lot of different shotguns in the squirrel woods: a Stevens .410 single-shot, a Harrington and Richardson 20 gauge, a 16-gauge Winchester Model 24 side-by-side, and a 1966 Mossberg Model 500 12 gauge with a Poly-Choke. I didn’t have a so-called squirrel rifle back then, and even if I did, I likely wouldn’t have used it. Dad shot a shotgun, and if it was good enough for him, well, it was good enough for me. Here’s why you might also want to choose a scattergun for squirrels.

1. Shotguns Are Best For Leaves and Moving Targets

Heavy foliage, which is common during the early part of squirrel season, can make a shotgun a good choice. During this time of year, you’ll be able get a positive ID on a squirrel through the leaves, but you can’t see the critter’s noggin long enough to settle a rifle’s reticle for a shot. Then, should the unimaginable happen, and you miss, the bushytail will start scampering through the trees, giving you a moving target or no target at all. The hundreds of #5 pellets in a 20- or 12-gauge shell come in mighty handy if you’re serious about gathering the fixings for Brunswick stew.

2. Want to Ensure Success for Young and New Hunters? Give Them a Shotgun

Let’s be honest here. If you’re mentoring a new hunter, regardless of age, who isn’t a Marine Corps sniper, then a shotgun with its multiple pellets might be the best and most encouraging way to start them out. If you want to grow an angler, make sure they catch fish. If it’s a hunter you want, give them the best tools for success. For a younger hunter chasing squirrels, one of those tools is a shotgun.

3. Shotguns Give Older Hunters a Margin For Error

My dad will turn 82 in March, and he’ll be the first to tell you that his hands aren’t as steady as they once were. Couple the passage of time with a condition known as familial (essential) tremor, a neurological often-inherited disorder that includes involuntary and rhythmic shaking of the arms and hands, and it makes it tough for him, and others in the same boat, to hold a .22LR rifle steady. Am I making excuses? I am not. I’m just implying that should the mechanic’s skills change, then his tools might also change.

Across the nation, suburbia is swelling, spilling out onto the landscape and into areas that not too awfully long ago were considered rural acreages. They’re outside the city limits, many of them, and open to hunting. But, with more and more homes going in all the time, there are a lot of places where you just can’t safely shoot a rifle anymore. Even a .22 LR, with its more-than-a-mile fall-out distance, is a no-go due to safety concerns.

A shotgun, however—say, a 20 gauge with 2-3/4” loads—might be just fine within this suburban setting. The key phrase here is might be. It’s still important to make sure you’re well within the law and far enough away from buildings to be hunting with a gun. If so, using a shotgun may open up squirrel hunting opportunities that otherwise wouldn’t be available.

What’s The Best Shotgun Load And Choke For Hunting Squirrels?

There’s the matter of distance and on-target performance. Shotguns are short-range firearms, and squirrels can be tough customers with hard heads, heavy bone structure, and thick hide and hair. So, the shotgunner is restricted by distance—say, 40 yards—and should shoot the proper choke. In my opinion, that means modified or full, and #4 or #6 shot.

The Argument For Why a .22 is Better Than a Shotgun For Hunting Squirrels

As is often the case with hunters as they mature, my shotgun phase of squirrel hunting gave way to my .22 phase. That, if you’re curious, gave way to a .32 muzzleloader stage, but that’s another story for another time.

Like shotguns, I’ve had plenty of rimfires come and go since Squirrel #1. I’ve used a Winchester Model 9422 lever action, the quintessential Ruger 10/22, a Stevens Model 66, a Remington Nylon 66,  and a Savage Model 24 .22LR/.410 over/under—which was one of the most accurate .22 rimfires I’ve ever owned. They’ve all been good and all had some drawbacks. Here’s where and when the .22LR, makes sense for squirrels.

Without getting all nerdy and technical here, the average 12 gauge 2-3/4” shotshell fired from a 28” barrel produces approximately 154 decibels (dB). In comparison, a standard .22LR (1,200 fps/140 ft-lbs muzzle energy) will show 140 dB, while a subsonic .22LR (1,050 fps/100 ft-lbs) will register right around 70 dB, or roughly half a traditional .22 LR. My point? A .22LR is a little bit quieter than a shotgun, and, theoretically, will spook fewer nearby squirrels with each shot. Shoot subsonic, and it’s quieter still.

2. Many .22 Rifles Are Deadly-Accurate at a Distance

To many rimfire shooters, the thrill, of toting a .22LR into the timber is the teamwork between an incredibly accurate rifle and a skilled shooter. Too, there’s the distance comparison, of which there is little comparison. Shotgun? Forty yards. An accurate .22LR? Most would quickly say 50 yards. Some 75, if they can consistently put a 40-grain bullet into a golf-ball-sized circle at that distance. Still, others talk all day about a ¼” group at 100 yards, which in anyone’s book is plenty good enough to head-shoot a fox squirrel. Regardless, there’s no denying the .22LR’s potential accuracy and edge when it comes to distance.

3. Taking Headshots With a .22 Means You Won’t Lose Any Meat

Shoot a squirrel with #5 shot at 25 yards, and you have multiple holes to contend with and blood-shot meat. Shoot the same squirrel in the noggin with a .22LR at 25 yards, and once he’s dressed, you’d swear he died of fright.

The Best Ways To Use a .22 For Squirrel Hunting

For one, there’s little margin for aiming error when using a .22LR. You’re going to have to be on your game with it comes to hitting that golf ball-sized target consistently with a 40-grain bullet at 57 yards. Or 35 yards. Or 70. It’s not a big target, that squirrel’s noggin, and you’ll have to be at your steadiest best.

You also will need to wait for a defined backstop before taking a shot. With a .22LR, I much prefer to shoot at a bushytail when it’s plastered against the side of a tree. If I miss, the bullet buries itself in the tree. A pass-through, and it’s the same story, only I get to put another fox squirrel in my pouch. Such opportunities don’t always present themselves, but I do try to maximize their “defined backstop” shooting situations. More than once I’ve waited, or passed up a shot, due to a sketchy backstop. Shotguns? The fall-out from that pattern is 300 yards, give or take, not a mile.

Finally, .22LRs can ricochet. My father always instructed me not to shoot at squirrels on the ground with a .22LR. “You never know who’s back in the woods fiddling around with mushrooms or what-have-you,” he would tell me. At 1,100 to 1,200 fps, a standard 40-grain .22 LR isn’t the fastest cartridge on the shelf; in fact, she’s pretty slow, and prone to ZINGGGGGGing off to who knows where after striking a rock, ice, or hard ground. Better to let that squirrel climb a tree—or run him up a tree—and then take a crack at him than risk a ricochet.

So What’s Better For Squirrel Hunting, a .22 or a Shotgun?

All this, and it really down to two words: personal preference. Shotguns have their role and their followers. So, too, does the .22LR. I’ve shot both. I shoot both, along with the aforementioned .32 Pedersoli muzzleloader. The bottom line truly is what you prefer. What you feel comfortable with. What you shoot consistently well with, and that with which you can ethically and responsibly take game at the distances at which you choose to work.

Can’t make up your mind? Chiappa offers a nice little .22LR over 20 gauge combination that, scoped, would make an excellent squirrel gun for the indecisive.