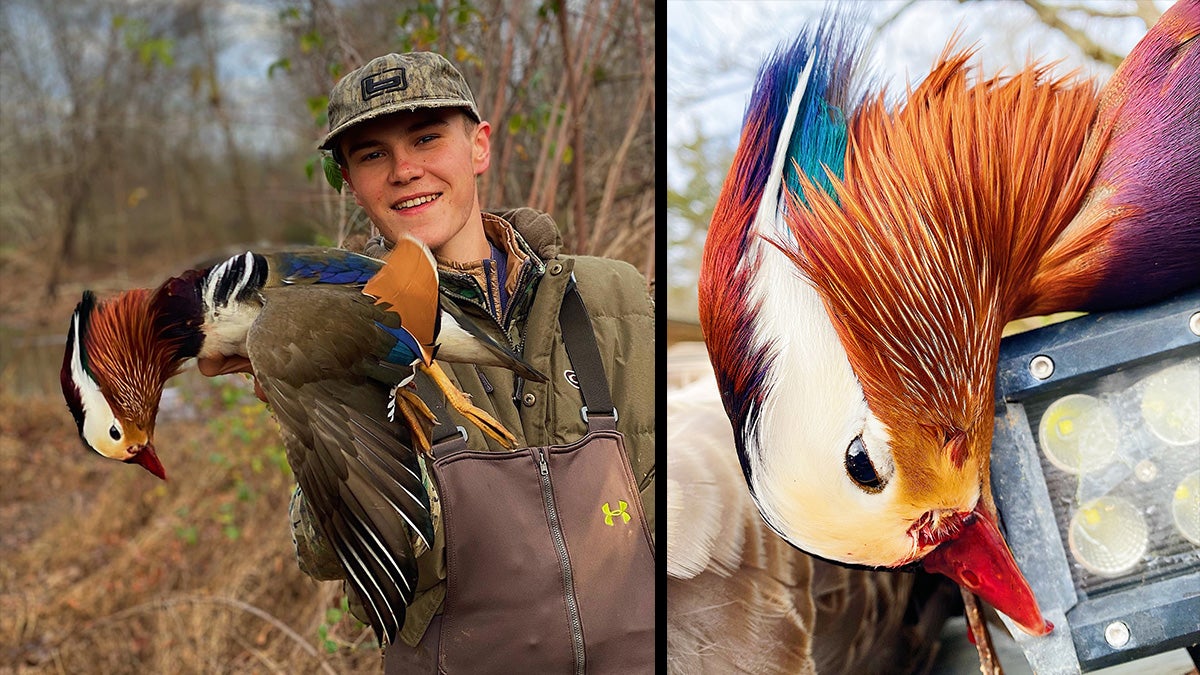 One of the best parts about duck hunting is that you never know what you might be able to shoot on any given day. Well, on a recent hunt, Will Turner, a Junior at Clemson University, had the opportunity to take a truly unexpected bird—a mandarin duck drake in full plumage.

Turner was hunting with several friends at a popular public waterfowl hunting area in northwest South Carolina on the morning of December 13. The mandarin duck was the first bird of the day. “He came in 2 minutes after first light,” Turner tells F&S. “Three of my buddies were standing up on the backside of Lake Hartwell. We were arguing about where we should sit because there wasn’t much cover. The duck, which we all thought was a wood duck at first, flew right by my buddy’s head. We were like, ‘yeah, we should probably just sit down.’”

That turned out to be a fortuitous decision. The hunters called at the duck with a mallard call—and it responded. The bird came over the decoys, and they let him pass. On the third pass, he flared off the decoys and sat down on the water about 100 yards away. “It was the craziest flying duck I’ve ever seen,” says Turner. “It was like his wings were touching the water.”

A couple of minutes later, the duck got up again and flew right into the spread. “I stood up and he flared to the right,” recalls Turner. “I shot him, and he landed on dry land. We didn’t know what he was until we got up to him. At first, I thought it was a merganser because of the white stripe on its back. Then I picked it up and was like, ‘oh my god! Oh my god! I just shot a mandarin duck!’ I wouldn’t have known what it was if I hadn’t watched so much National Geographic. It was the craziest thing I’ve ever experienced duck hunting. And the fact that it was on public land in upstate South Carolina made it even better.”

According to Ducks Unlimited, the Mandarin duck is the Asian equivalent of the wood duck. They are native to East Asia and have been brought over to North America as exotics. The species has reportedly established a small wild population in Sonoma County, California, but it’s unclear where the drake Turner shot came from. He checked with a nearby aviary that sells domestic mandarin ducks, but they don’t have any records of escaped birds. Turner has also reached out to nearby backyard duck owners, but none of them think it was one of theirs. The bird did not have a band, and its dewclaws were not clipped.

Thirty minutes after shooting the duck, a pair of geese flew into the spread, and the young hunters took them. Then, they called it a good morning of duck hunting and were back home by 8 a.m. Turner is a 20-year-old forestry major with a wildlife biology minor. He was born and raised in the Clemson area, which makes his trophy bird all the more meaningful. He plans on getting the mandarin duck mounted.

“That thing was just beautiful,” he says. “It was the prettiest bird I’ve ever laid my eyes on. It was a once-in-a-lifetime experience. I don’t really have much else to say except that it was wildly stunning. It was the very last thing I thought I was going to see and pick up that morning.”