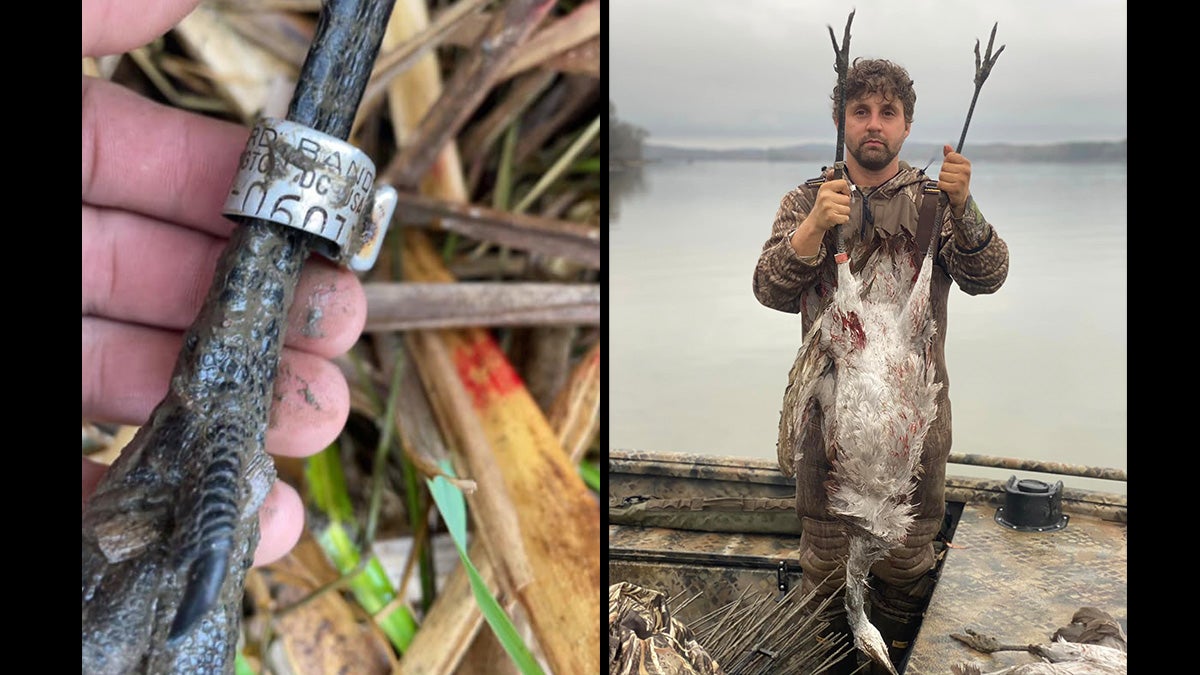 The sandhill crane was banded in Michigan in 1989. Austin Davis
SHARE

Austin Davis recently bagged the bird hunting trophy of a lifetime when he shot a sandhill crane that was banded in 1989—one of the oldest specimens on record.

“When I looked at the band, it didn’t have a phone number or website on it, I knew it was an old one,” the 28-year-old Davis tells F&S. “I reported it and found out the bird was older than I am. I freaked out. Who knows what this bird saw in its life and how many hunters and predators it had to avoid before I shot it?”

Davis, of Lebanon, Tennessee, drew his two-crane Tennessee permit this year after missing out the year before. He had drawn in previous seasons but had always used an outfitter for crane hunts. This year he and his best friend, Bradley Buchanan, decided on a DIY public land adventure. About 14,000 cranes winter on the Hiwassee Refuge on Lake Chickamauga in southeastern Tennessee every year. “Outfitters have all the crop fields leased up around the lake, but we thought we could get into the public area between the refuge and the crop fields and decoy some cranes ourselves,” says Davis.

Over the summer, the pair invested in four-dozen crane silhouettes, and they spent a day scouting public land to find a mud flat where birds often landed to gather and loaf before and after feeding. When the season rolled around, they set their spread in the mud, hid in cattails on marsh stools, and waited for the cranes to fly. Before the shooting started, there was one thing they had to settle. “We decided to take turns shooting, so we played rock-paper-scissors to see who got the first shot,” says Davis. He won.

Most of the cranes passed overhead without stopping, but one bird split out of a flock, circled the decoys warily, and came in. Davis shot it and ran out to make the retrieve. It had a plain red plastic band around the knee, and an old, worn metal band as well. Excited, Davis ran back to the blind and jumped in with his prize just as another single committed to the spread and Buchanan shot it.

“After that, we waited, says Davis. “We could have shot birds passing overhead all morning, but we wanted to only shoot birds in the decoys.” At one o’clock the pair was thinking about picking up but decided to wait a few more minutes. Not long after, both hunters shot their second birds. “My second crane was a juvie,” says Davis, “I shot the oldest and the youngest crane of the day.”

How Long Do Cranes and Waterfowl Species Live?

According to U.S. Geological Survey, the oldest sandhill crane on record was a 37-year-old banded in Wyoming in 1973 and found dead in New Mexico in 2010.  Ducks Unlimited waterfowl scientist Dr. Mike Brasher says it’s no surprise that cranes are the longevity record holders because they are large birds. “Typically, a bird’s average lifespan correlates strongly with its body size,” says Brasher. “For example, geese and swans live longer on average than do smaller ducks.  But even within the duck families, you find that the average lifespan of smaller species, such as teal, is shorter than that of larger ducks, such as mallards and canvasbacks.”

Smaller birds, Brasher goes on to say, often reach sexual maturity at a younger age than larger birds, and they often show a high risk tolerance as well, which is why teal decoy so readily. Incredibly, a hunter in Missouri shot a greenwing teal in 1960 that had been banded in 1941 in Oklahoma—the oldest greenwing teal on record.  Meanwhile, the oldest mallard ever documented was banded in Louisiana in 1981 and shot in Arkansas in 2008.

Read Next: A Pintail-Mallard Hybrid? Here’s What We Know About Duck Hybridization

Davis’ bird was banded in Germfask, Michigan in August 1989. Regardless of its old age, Davis plans to eat his 33-year-old crane instead of getting it mounted, both because he likes crane meat and because the bird took quite a few pellets as if finished in the decoys. Davis says the band will go on his late grandfather’s call lanyard which hangs in Davis’s living room.  “He may be gone but this way he is still a part of my hunts,” says Davis.